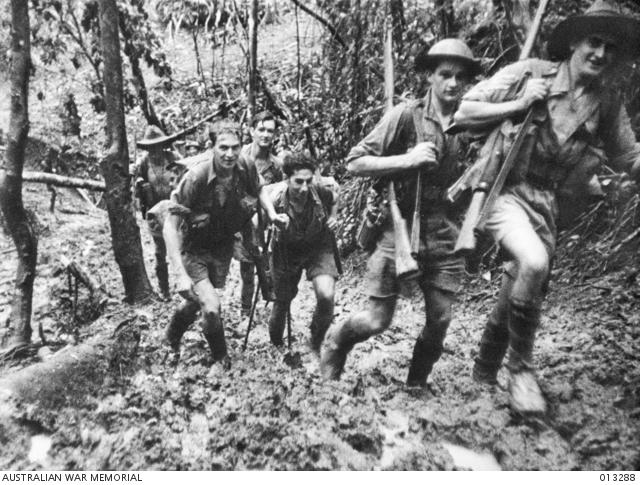 Ninety-six-year-old George Palmer’s face is forever linked with Kokoda. He was one of six soldiers whose image was captured by war photographer Damien Parer in a picture that would become one of the defining images of the Second World War campaign.

“This fellow was at the side of the track, and he called out to us, and he said, ‘Chaps, get plenty of mud around your boots.’ Well, that was obvious, it was there. So that wasn’t hard at all – we were knee deep in mud. And it was Damien Parer. I was just lucky,” Palmer said while visiting the Australian War Memorial.

“We’d been relieved and we were in single file, about 50 of us, because that’s all that was left of the battalion.

“I’m the second one … and the fellow with the felt hat, he was a First World War Gallipoli man. He put his age up to go there, and down to come with us, and he was a tremendous bloke. He was actually a father figure to us. He was a wonderful fellow, he really was.

“I had just had my 21st birthday in June… We never realised that photo would continue to capture the history of the Kokoda Track.”

Palmer has a framed copy of the photograph on his wall at home, a constant reminder of his time during the Second World War and the mates he served with at Kokoda.

“Once you got out of action it was all right. It was amazing how you felt when you were relieved, and the Japs were only 100 yards away, and you felt, ‘Gee whiz, you were safe out here.’ The things that go on when you are young, I suppose.” 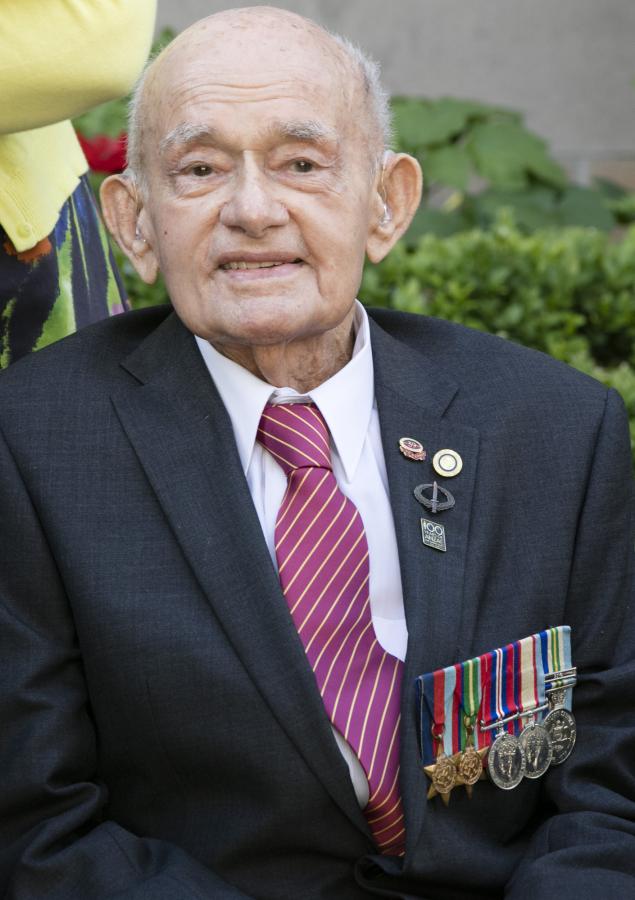 George Palmer: "I felt it was the duty of everybody to enlist."

The son of English immigrants, Palmer was just 20 years old when he joined up. He’d been working as an ironmonger for the local hardware store in Korumburra in country Victoria, and was with his family when he heard the declaration of war on the radio.

“I felt it was the duty of everybody to enlist,” Palmer said. “My father had been in the First World War – he’d been decorated and badly wounded – and my elder brother was in the army, so I just joined the army. That was in August 1941 in Victoria, where I come from.”

Palmer joined D Company of the 39th Battalion and remembers parading through the streets of Melbourne before going to New Guinea to begin garrison duty at Port Moresby airfield.

“I was in camp and they called for volunteers to go to New Guinea – it wasn’t for war duties, it was just for protection – but by the time we were trained at Darley and we’d arrived in Moresby about New Year’s Day 1942, the Japs were in the war and it was totally different,” he said.

“We dug trenches and we unloaded boats, and we had very little training. But when we went away, we were commanded by First World War officers in many cases, and without disrespect to them, they were old, and they never would have made the grade. They were replaced by younger fellows who had proved themselves in the Middle East in action, and they were very good.”

When the Japanese landed at Gona, Palmer and the 39th were sent to Kokoda. “We were sent by a DC3 [transport] plane to Kokoda, but couldn’t land due to bad weather,” he said. “We then made our way by foot to Kokoda [and] it took four days.”

The Japanese began their push towards Port Moresby and eventually reached the village.

“Our battalion had attempted to retake Kokoda, but we were overwhelmed and we were pushed back to Isurava,” he said. “During the battle of Isurava, the Japanese were attacking in wave after wave and our commanding officer, Lieutenant Colonel Ralph Honner, informed us that if the 2/14th Battalion who were coming to relieve us didn’t arrive, we would be over-run that night. Fortunately they did arrive and they were magnificent.”

Throughout the battle, Palmer heard messages of large numbers of Japanese troops in the area. “We knew that we were outnumbered, although as time passed we knew they were running out of food,” he said. “Initially the Japanese only had enough supplies for 10 days from landing at Gona to arriving in Port Moresby. In time they started to succumb to sickness and lack of food and tropical illnesses.”

After the Japanese withdrawal and the capture of the village of Kokoda, the 39th continued their advance, capturing the village of Gona in northern New Guinea.

Palmer remembers one close call in particular. “Oh, yes,” he said. “I never forget we were at a place right near Gona. There were these bushes, and a Jap walked out straight in front of me. I’ll never forget that. I shot him, of course. But to this day, you know … I’ve got his details at home, and I went to the Japanese embassy, and I still feel I should have done more perhaps to contact his family and give them his things. I’ve got his army pay book, and when he last had pay and all that. I should have perhaps sent it to them. It was him or me. But, anyhow, that was what you did.”

Palmer was medically evacuated to Australia where he spent time in a convalescent camp in Ballarat before returning to New Guinea. By then, the 39th had been disbanded because of the large number of casualties so he joined the 2/1st Field Ambulance and continued to serve until he was discharged in April 1946.

He remembers feeling a sense of relief when the war was over. “Oh yes, it was,” he said. “But it was harder to go back to civvy life. I actually felt in some way inclined to stay in the army, but I didn’t, I got married instead, and we were married for 70 years.”

He will never forget where he was when the war ended. “We were just out of Wewak,” he said. “I’d gone to Wewak area … [and] it was there I saw, I think, the saddest thing I saw during the war. The Japanese had landed at Aitape and there were 3,500 prisoners from India. They were to build a bridge, to build a road from Moa to Moresby, and this day there were six of these poor Indian soldiers came through our lines, and they were terrible. I’ve never seen a sadder sight than them. They were in rags, and one of them was an officer, and he kept a diary, so they kept him at Wewak to give evidence of war crimes. The other 11 they put on a plane to send home and that plane crashed. It was incredible. That was that, and he was the sole survivor. Things like that you never forget.”