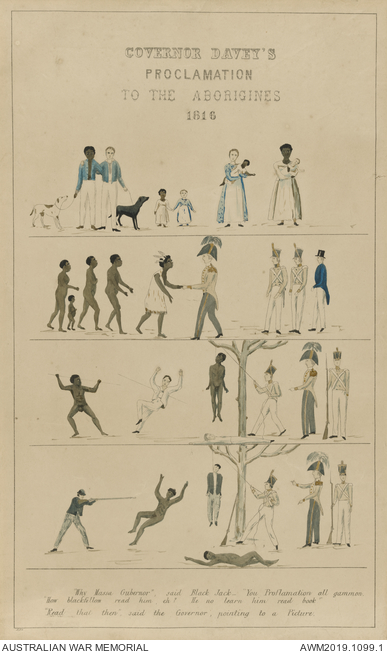 This print was probably made for the Intercolonial Exhibition, held in Melbourne in 1866. Despite the title, the original proclamation boards date from about 1829, and were authorised by Lieutenant-Governor George Arthur, rather than his predecessor Thomas Davey. Arthur was a lieutenant-governor as the only full governor was in New South Wales; in practice, Arthur was the governor of Van Diemen’s Land. This lithograph presents a complex story about Aboriginal dispossession, Australian identity, and British law in theory and in practice.

The board is divided horizontally into four panels. The top panel shows Aboriginal people and Britons living in harmony. The second panel shows the meeting of the two societies; the British are represented by the lieutenant-governor, soldiers, and a free settler or civil officer, while the Aboriginal Tasmanians are represented by a chief, adults and a child. The lower two panels illustrate the application of British law, at least in theory. The punishment for spearing a settler would be hanging; likewise, the punishment for killing an Aboriginal person would also be hanging. The written anecdote at the bottom does not appear on the original boards; it seems to have been added to help the audiences of the 1860s understand the purpose of the boards.

The anecdote itself is an example of mid-nineteenth-century racism, casting an imagined “Black Jack” in conversation with the governor about written proclamations:

“Why Massa Gubernor,” said Black Jack, “You Proflamation all gammon. How blackfellow read him, eh? He no learn him read book.”

“Read that then,” said the Governor, pointing to a Picture.”

In February 1829, the colony’s Surveyor-General George Frankland wrote to Lieutenant-Governor Arthur suggesting the use of sketches on trees to mimic Aboriginal peoples’ own practice of drawing on and carving trees to tell stories. Arthur agreed, and had a number of wooden boards painted.

Context of the proclamation boards

The simple story presented by the board, however, obscures the complex reality that prevailed in Van Diemen’s Land in the late 1820s and early 1830s. Governor Arthur had been prosecuting a military campaign against Aboriginal Tasmanians since declaring martial law on 1 November 1828. Before that, in April 1828, Arthur had issued a proclamation to the effect that Aboriginal people would require a passport in order to be in the “settled districts” of the island – the corridor between Hobart and Launceston. Settlers who shot Aboriginal people would not be prosecuted for murder.

The equality before the law depicted on the board is a fantasy. Relations between Aboriginal people and settlers worsened, and Arthur began to desire the forcible removal of Aboriginal people from lands considered valuable by the British. During October and November 1830, he instigated the infamous “General Movement”, often known as the “Black Line”, a manoeuvre involving more than 2,200 military personnel, settlers, and convicts marching from the north to the south, conducted with the aim of sweeping the Aboriginal population into the Tasman Peninsula. Although this operation failed to capture many Aboriginal people, subsequent efforts by Arthur saw the Aboriginal population of Tasmania removed to Flinders Island in Bass Strait.

In many ways, the proclamation board of Governor Arthur is a propaganda piece meant for British eyes, demonstrating the government’s good intentions of harmonious integration. With an understanding of its historical context, however, the board tells a very different story, demonstrating the role of settlers and the British military in the dispossession of Aboriginal Tasmanians, and the public face that British authorities put on their activities.