Three months into this phase of the project has seen significant progress on both the external and internal conservation of the tank. Externally, all original armour plate components have been repaired. Replica plating has been fitted to replace inaccurate or missing components, with some plates requiring considerable modification to fit this individual tank, and to correct minor errors in externally supplied fabrications.

All the original running gear and mudguards have been conserved or remanufactured, and refitted, with replica components installed as necessary. Hubcaps on the track return rollers and idler sprocket are still to come, and the replica tracks have not been installed at this stage as further surface work is required on the hull exterior. 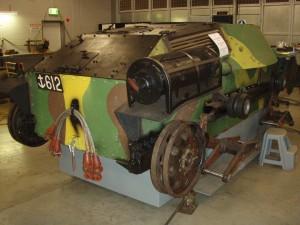 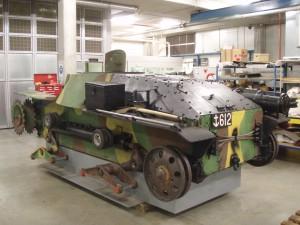 As a project 'milestone', all rear armour plating was fitted, and missing external fittings and equipment, replicated from collection images of other Ha-Go tanks, was made 'in house' and installed. The turret has not been reinstalled at this stage.

In parallel with this external work, internal transmission components were investigated for ease of removal. Given the severe degree of water induced corrosion inside the tank, the main gearbox and transfer gearbox were able to be removed, with badly corroded mounting bolts requiring removal by oxy cutting. Removal of the main gearbox enabled the final reduction gear and drive sprockets to be treated.  As these sub-assembies had very corroded and inaccessable fasteners, to reduce dismantling impact  it was decided not to remove these assemblies from the tank, but to treat in situ. After rust removal from the badly corroded brake drums, the final drives now rotate freely. 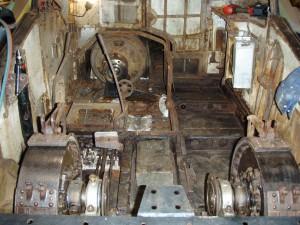 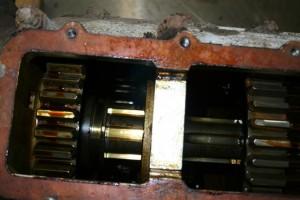 Given the past 70 years of weathering, neglect and abuse, it was surprising to find the main and transfer gearboxes were in virtually pristine condition internally, with no corrosion and no wear marks on the gear teeth. It appears that the tank was landed by the Japanese marine landing force at Milne Bay and travelled only a relatively short distance. It was engaged in four actions with men of the Australian 61st, 2/10th,  and 25th Battallions. It was stopped during the third encounter by Corporal JFP O'Brien, recovered by the Japanese, and  later captured after the fourth encounter by the Australians on 29th August 1942. (One careful owner, low mileage!)

Of considerable interest, after all these years, two more  cartridge cases from the 7.7mm Japanese machine guns were found under the gearboxes. These are highly likely to be relics from those actions in 1942, and complement the battle damage found on the tank. 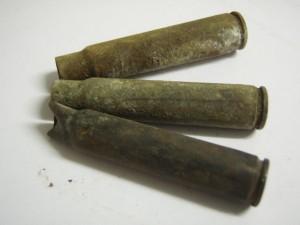 The success of the progressive dismantling of the transmission has now enabled a serious attempt at removing the badly deteriorated engine for treatment. The tank had been sitting exposed  to the weather in a scrap yard for many years, with five of the six cylinder heads missing, and at this stage the engine appears to be rusted solid. Interior examination with a borescope shows no oil in the sump and the engine interior has surface rust. 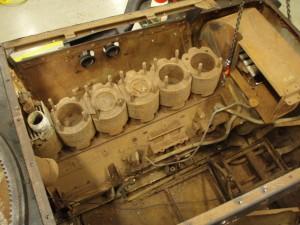 Interesting aspects of this project are the identification and preservation of battlefield damage and relics still present that relate directly to the known history of the tank, and the progressive nature of the treatment, as initial unknowns are resolved and future actions become clearer.

The engine has been removed from the tank. Note the five missing heads. 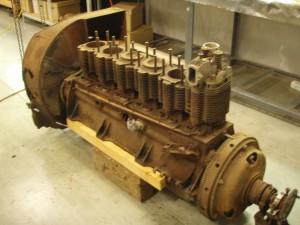 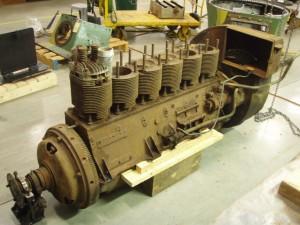 From now on it will be slow and steady work investigating, cleaning and treating the engine, and the internal hull surfaces! 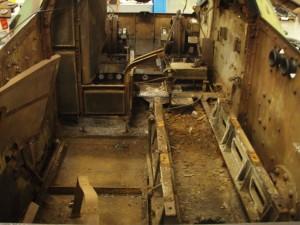 Part of the work involves sourcing or replicating missing components to complete the external appearance. For example, the tank jack mounted on the mudguard - 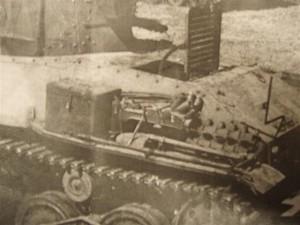 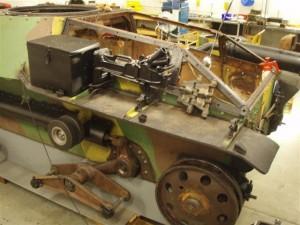 Fortunately, a modern 10 tonne ratchet jack was virtually identical in overall appearance. After removing English lettering cast into the jack and unobtrusively stamping "AWM II" to identify it as a replica, it fittted perfectly into the replica mounting bracket (made in-house from an original image of a Ha-Go tank).