The marks of war 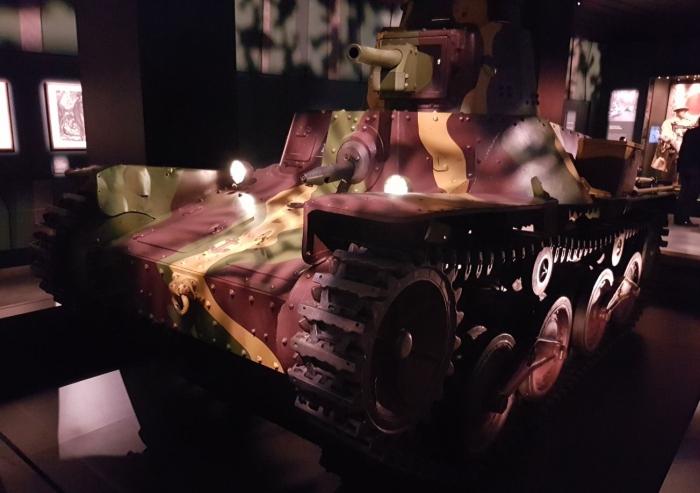 The Japanese Type 95 Ha-Go Light Tank is the centerpiece of the new display to mark the battle of Milne Bay.

It’s been dragged over a land mine, had test shots fired at it and been filled with old machine-gun cartridges, dirt, rust and rubbish. It’s had soldiers’ names scratched into it, been pulled to pieces and put back together again, and was even home to a dead rat. And now the Japanese Ha-Go tank that Australian soldiers found hopelessly bogged and abandoned 75 years ago at the battle of Milne Bay is on display at the Australian War Memorial as part of a special display to mark the anniversary.

Fought between 26 August and 6 September 1942, the battle of Milne Bay was a major turning point in the Pacific war and was the first time the Allied forces had decisively defeated a Japanese offensive on land.

“Strategically Milne Bay is very important for Australia,” said Shane Casey, a senior curator at the Memorial. “This is actually taking place on Australian soil on the territory of Papua New Guinea and it’s the first major land defeat the Japanese have had. Before Milne Bay, the Japanese were thought of as supermen, and this episode proved they could be beaten”

In some of the worst conditions faced by Australian forces in the Second World War, the battle of Milne Bay raged through incessant rain, ankle deep mud, and malaria ridden swamps before the Japanese were forced to evacuate their remaining forces. It was in the mud and the grime that Australian soldiers stumbled across the battle-scarred tanks that had so terrorised them.

“Troops on the ground thought the Japanese had more than two tanks,” Casey said. “They believed there might have been up to eight of them. It’s dark, it’s wet, it’s jungle and it’s scary, and then there’s the noise and you can’t tell where it’s coming from … It looks as if one slid off the road and got bogged, and the other tried to go around and got completely, hopelessly bogged, and so they were abandoned and they were discovered by Australian troops.” 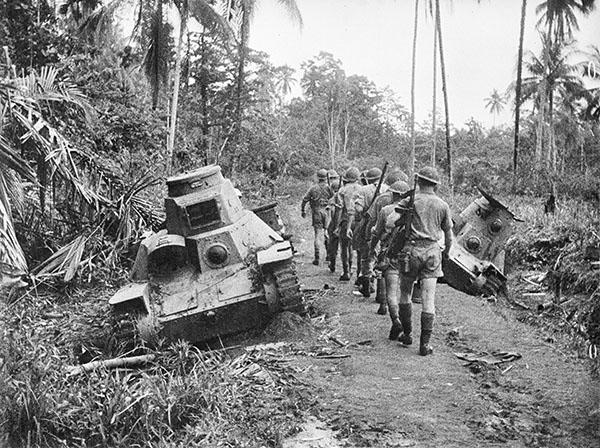 The two Japanese Type 95 Ha-Go Light Tanks were found abandoned and hopelessly bogged at the battle of Milne Bay.

Soldiers then scratched their names into the paint and started souveniring bits and pieces.

“Then the call went out through the battalions, basically saying, ‘Give the captured material back, we need it,’” Casey said. “One of the things about Milne Bay is that it was the first time that Japanese material had been captured in quantity, and Allied military intelligence took the opportunity to draw it, test it and distribute that in manuals … They wanted particularly the tank headlights because they were missing, and the rumours were that they were armoured, and that you could fire at them without effect. As it turns out, they were just ordinary headlights.”

The tank was winched out of the mud and shipped to Australia.

“It’s only through the fact that this was the first Japanese vehicle to be captured that this survived,” Casey said. “It was non-operational and the Allies didn’t even know how fast it went or what its range was because so many bits had been taken by Australian soldiers. Once back in Australia it was carefully examined and tested – they dragged it over land mines to see how effective they were and broke the chassis. The turret was blown off, and the hull still retains a large crack that almost split it in two. And then it disappears from the record after the war, and I think it must have just ended up on an anti-tank range or in a scrap metal yard.” 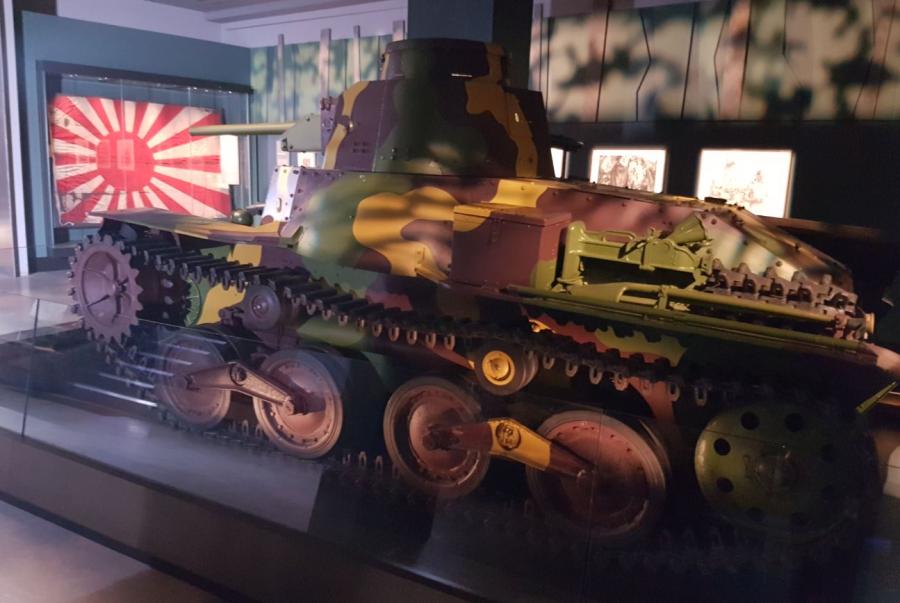 The Japanese Type 95 Ha-Go Light Tank was brought to Australia for scientific research.

The tank was eventually acquired by a small museum in Melbourne in the 1970s before the Memorial bought it in 2005.

“It was very derelict and was missing big chunks,” Casey said. “We’ve done a lot of work [to reconstruct it]. The gun for one of the tanks has a bullet hole through the side of it and it was displayed in NSW as late as 1946. It’s touring around as part of a display of captured enemy equipment and then it disappears. What we’ve got in the tank is a replica, but I believe the gun might still exist somewhere.

“The tank is a great thing to have in our collection. Anything from Milne Bay is pretty rare [and] Milne Bay changed Allied perceptions quite a bit. It was a real shot in the arm.”

The battle of Milne Bay display in Anzac Hall features the Japanese Type 95 Ha-Go Light Tank, as well as art, photographs, and artefacts from the Memorial’s collection, many of which have never before been on public display. The exhibition is in addition to the permanent Milne Bay display in Aircraft Hall which features a RAAF P-40 Kittyhawk “Polly” flown during the battle. 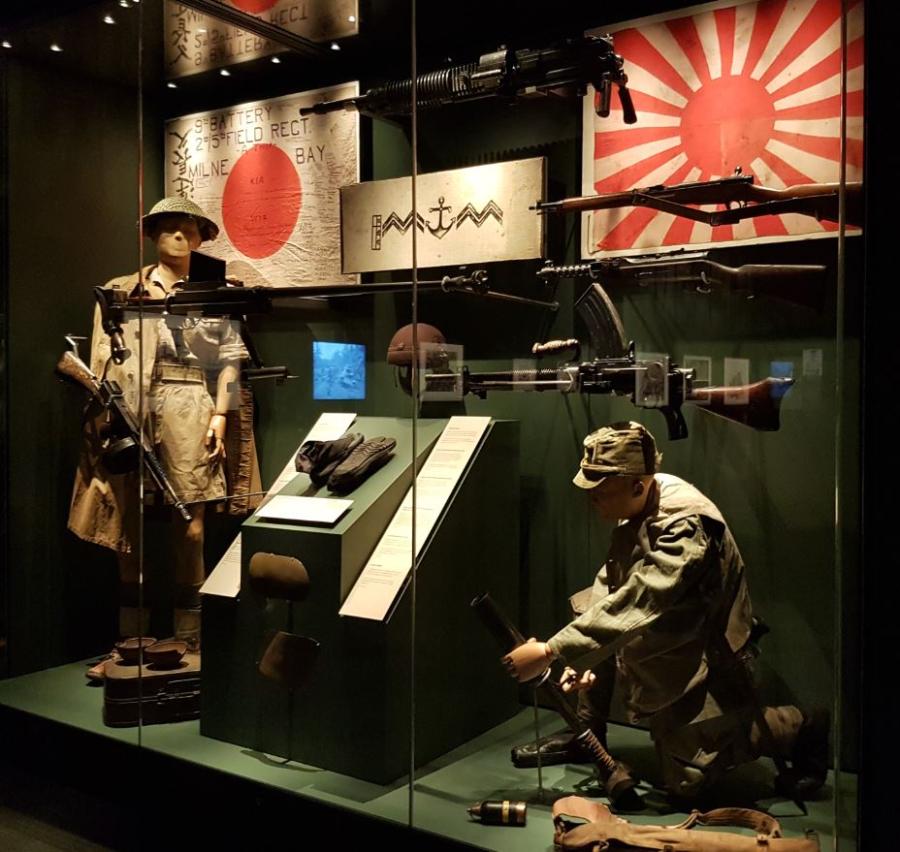 The Battle of Milne Bay display features artefacts from the Memorial’s collection, many of which have never before been on public display.