“Something of a nightmare”: Observing the Six Day War 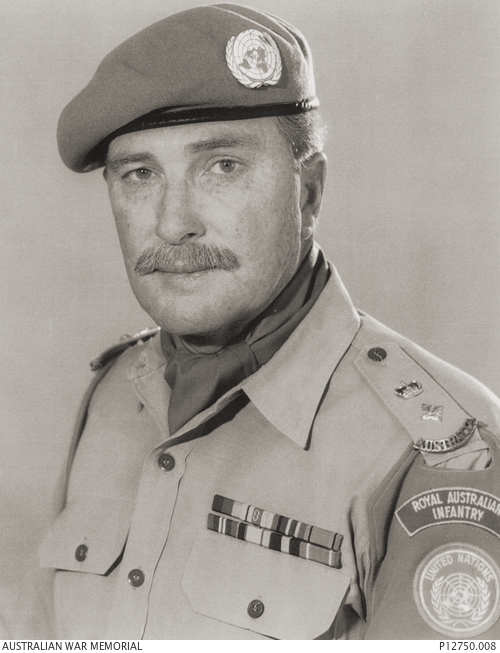 Lieutenant Colonel Keith Howard while serving with UNTSO in circa 1973

Monday 5 June 1967 began as a rather ordinary day for Major Keith Howard. He deposited his laundry, posted some letters, drove to work, and attended the first of a series of meetings scheduled for the day. Shortly after 11 am, however, a “prolonged burst of machine gun fire … heralded what was to be something of a nightmare.” Within a matter of hours, Howard would be wounded and in the middle of a war on the streets of Jerusalem.

Howard had arrived in the Middle East only three days earlier to take up a post with the United Nations Truce Supervision Organisation (UNTSO). As a Military Observer, he was to help monitor the ceasefire and maintain the peace between Israel and its neighbours, Egypt, Jordan, Syria, and Lebanon. Howard was an experienced officer, having fought with the 2/43th Battalion at Tobruk, El Alamein and on Borneo during the Second World War, and had voluntarily taken a reduction in rank (from colonel to major) to serve with UNTSO.

That “fateful Monday”, as Howard referred to it, was his first day on the job. He was in the middle of a security brief at Government House, UNTSO’s headquarters in the armistice zone between the Israeli and Jordanian-controlled sectors of Jerusalem, when the first shots rang out.

Israel had made a pre-emptive strike against Egypt earlier that morning, opening the Six Day War. Jordan was shortly thereafter drawn into the conflict, with tank, machine-gun, mortar and artillery fire erupting across Jerusalem as Israeli and Jordanian troops clashed on the city streets. Tensions had been simmering for some time, but the speed and ferocity of the fighting caught many by surprise. 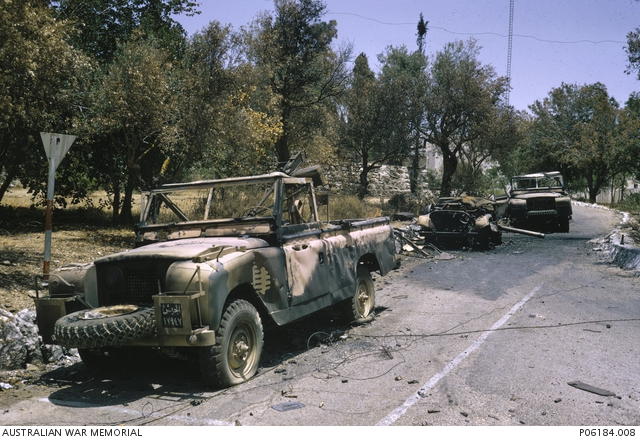 The firing put an abrupt end to Howard’s meeting. As UNTSO operations staff began plotting movements and senior figures appealed to Israeli and Jordanian officials for a ceasefire, others took to the roof of Government House to observe the developing situation.

Shortly after noon, the war was on UNTSO’s doorstep. Government House was meant to be neutral to and independent from the warring nations, but by 1 pm Howard watched as “crouched, hurrying Arab soldiers passed by the windows, setting up mortars and anti-tank guns” on the grounds of the UNTSO compound. Howard continued watching as three Jordanian soldiers, led by a “pugnacious … and excited” major, burst into the building and demanded that everyone leave.

The Jordanians were ordered away by an irate Lieutenant General Odd Bull, the Norwegian head of UNTSO. But before vacating the grounds, the Jordanians opened fire on nearby Israeli soldiers. The clash alarmed Howard, who thought it “spelled the end of G.H. [Government House], and probably all in it, because the Israelis immediately threw everything back.” 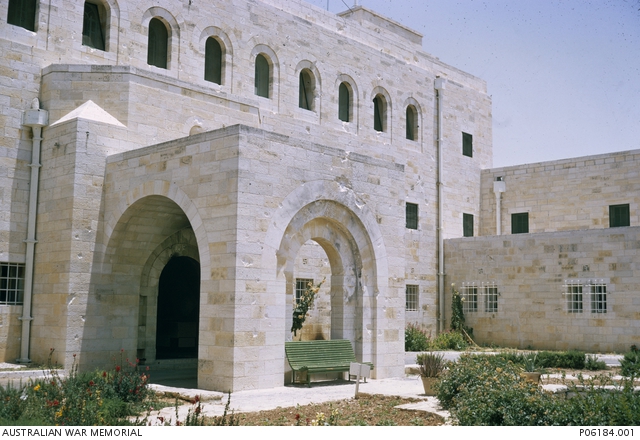 The pock-marked entrance to UNTSO’s headquarters at Government House, damaged during the Six Day War

A hail of mortars, bullets, rockets and even tank fire erupted around Government House – as Howard later wrote to friends, “the place fairly rocked.” The Jordanians withdrew shortly after but the Israelis, determined to secure the area and clear any remaining opposition, blasted through the reinforced front doors.

Most of the families and dependants of UNTSO personnel had been evacuated to Cyprus as a precaution in the days leading up to 5 June. Those remaining in Jerusalem, though, had sought refuge at Government House, trusting that its independence would not be violated. Howard and other UNTSO staff were huddled in corridors alongside frightened mothers and children as the Israeli soldiers stormed in, tossing grenades and clearing rooms lest any Jordanian forces remained.

One burst of machine gun fire swept through the lobby and down the passageway, a small scrap of metal from a ricochet catching Howard in the right thigh. Howard and some thirty others withdrew to the cover of a small side room, keeping low to the ground. As the firing and blasts drew nearer, one American peacekeeper began shouting, “UN! UN!” After a pause, the Israelis peered in to find what Howard later described as an “odd collection of innocent souls, all jammed up”.

Howard and the others were kept under guard and with arms raised until the Israelis had cleared the building. Eventually they were ordered out. “The scene of destruction which met our eyes,” Howard later wrote, “was appalling – cars, trucks ablaze and shattered by gunfire – the walls of G.H. splintered and holed, outbuildings wrecked, and the gardens a shambles.”

UNTSO staff and dependants began hopping into vehicles and driving away in a convoy. Howard, his leg bloodied and stiff, hobbled to his UN station wagon only to discover it had a flat rear tyre, a punctured radiator, shattered windows and “the body a sieve from bullet and shrapnel holes”. To Howard’s amazement, the engine kicked over. He trailed the UN convoy, the station wagon veering across the road as Howard tried his best to avoid further gunfire. 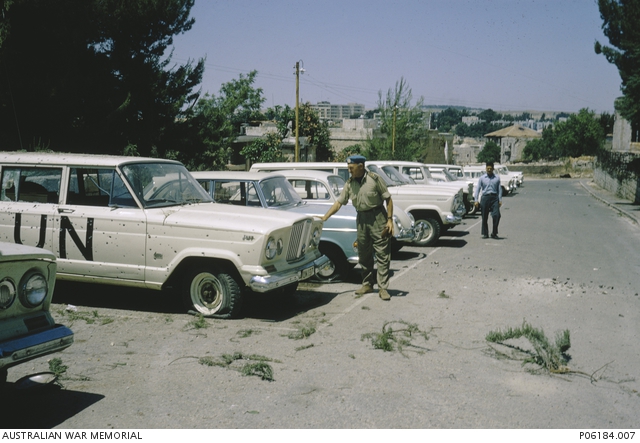 The convoy terminated at the President Hotel in west Jerusalem, which had been cleared by the Israeli delegation for use by UNTSO. Steam was billowing from the station wagon by the time Howard arrived. The wreck caught the eye of UNTSO’s Dutch transportation officer who, despite the chaos around them, promptly berated Howard for driving a UN vehicle without adequate water in the radiator.

As night set in, and after having his wound tended to, Howard recorded that the sky was “continually alight with tracer and shell bursts, flares – the air continually erupting with the stacatto [sic] bursts of small arms fire, and the crash and crump of heavy shells and mortars.” He fell into a fitful sleep that evening until roused at 3 am, when it was his turn to man the headquarters wireless set parked in a car outside the hotel. As dawn broke, Howard watched Israeli bombers “wheeling and diving onto their enemy positions” and could hear as the ground fire “stepped up again.”

The fighting in Jerusalem simmered down over the next two days – by which time Israel had occupied much of Jordan’s territory in the east of the city – but continued in the Sinai and on the Golan Heights until 10 June. The next few weeks were frantic for UNTSO’s observers, who had to map out the new buffer zones and ensure there were no further flare-ups in the fighting. 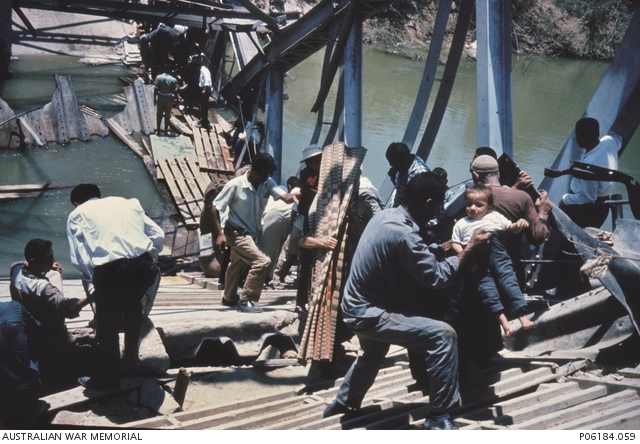 A few days after the ceasefire, Howard journeyed into the former buffer zone and was confronted by a scene “most distressing” – “burnt vehicles, broken bodies, shattered houses, shameless looting” and “forlorn and frightened” citizens “pottering about the ruins of their homes”. It had been a dramatic beginning to what was meant to be an 18-month tour as a UN peacekeeper. Howard eventually remained with UNTSO for almost a decade, assuming positions of increasing responsibility. But the “last 6 days”, he reflected at the time, “have been some of the most momentous, exciting and interesting in my life.”

The Australian War Memorial’s Development Project will be sharing the stories of a new generation of Australian men and women who have served our nation in recent conflicts, and on peacekeeping and humanitarian operations. To share your story email: gallerydevelopment@awm.gov.au

To stay informed about the Development Project, sign up to the Our Next Chapter e-newsletter www.awm.gov.au/ourcontinuingstory/stayinformed