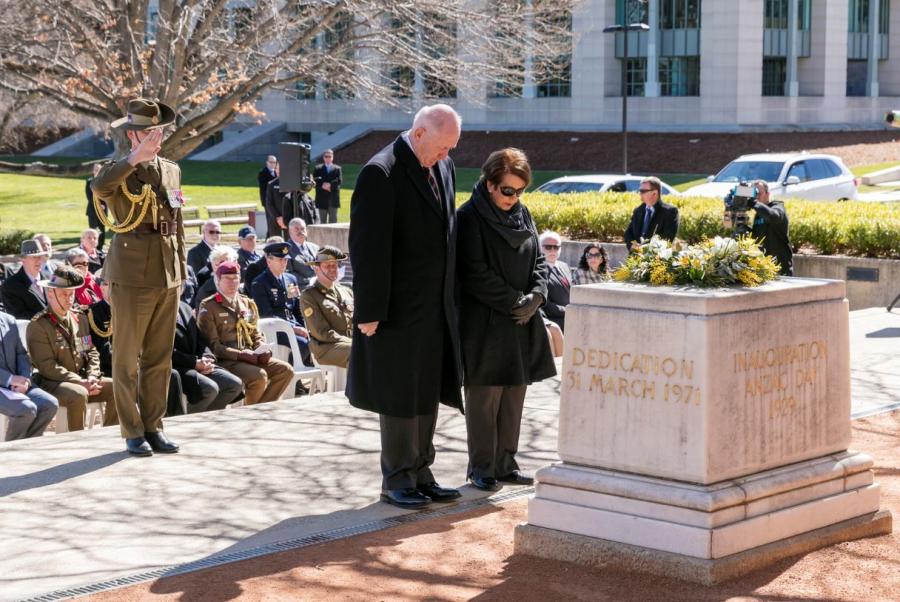 The Governor-General, Sir Peter Cosgrove, and his wife Lynne at the launch of Legacy Week at the Australian War Memorial.

Mark MacInnes was just 13 years old when his father Andrew died while serving with the Australian Defence Force.

“I felt as if no one would ever understand the pain that I felt,” the now 20-year-old said, speaking at the launch of Legacy Week at the Australian War Memorial.

“I felt isolated and unable to turn anywhere, and when Legacy first came to me, I brushed them off … I kept them at arms distance, but they still continued to bend over backwards … extending an arm of love and support at all times.

“Legacy, to put it simply, caught me mid fall. It’s given me a light inside … that I used to only see inside of everybody else. No more do I feel there’s blackness in and around me, and if ever I do, I’ve got people that I need to help me get through it, to move past it, and that feeling is indescribable.”

With its origins in the battlefields of the First World War, Legacy started in 1923 and continues to care for the families of veterans who have died or given their health.

Legacy Australia Chairman Tony Ralph said Legacy’s remit was simple. “We all understand, we all accept, that war is a terrible business,” he said. “There are few winners, but there is a great deal of pain and suffering and loss and anguish. There are always the families left behind, the families who will for ever more … grieve and who might wonder what their life might have been had their [loved ones] returned … [Legacy] is based on a very simple premise, but equally a very sacred premise, the dying request of a digger to his mate to look after the missus and the kids - a request made, and a promise kept, on the battlefields of France 100 years ago.”

The Governor General, Sir Peter Cosgrove, said Legacy ensured that those who were left behind were not forgotten.

“For every man, for every woman who has served in the Australian Defence Force, and in doing so, has given their life or become wounded, injured or ill, there is a story, there is a family,” he said.

“Their stories go on, but their life is never the same: there is grief to overcome, there is the shadow of regret and loss … But those left behind to carry on alone are not forgotten because Legacy is there, and Legacy remembers, keeping that solemn promise made a century ago, to care for the families of those who have served ...

“We think of the 65,000 widows receiving support today, leading a different life than the one they planned. We think of the 1800 children and dependants with a disability without a parent for whom Legacy is there … and we thank the volunteers, 5000 of them around the nation, who are the modern, living embodiment of the Legacy promise. I’m sure the founders of Legacy would be proud of what their idea has gone on to become …

Legacy merchandise, including badges, pens and the Legacy bears, are available across the country during Legacy Week. To make a donation or volunteer your time visit www.legacy.com.au or call 1800 534 229. 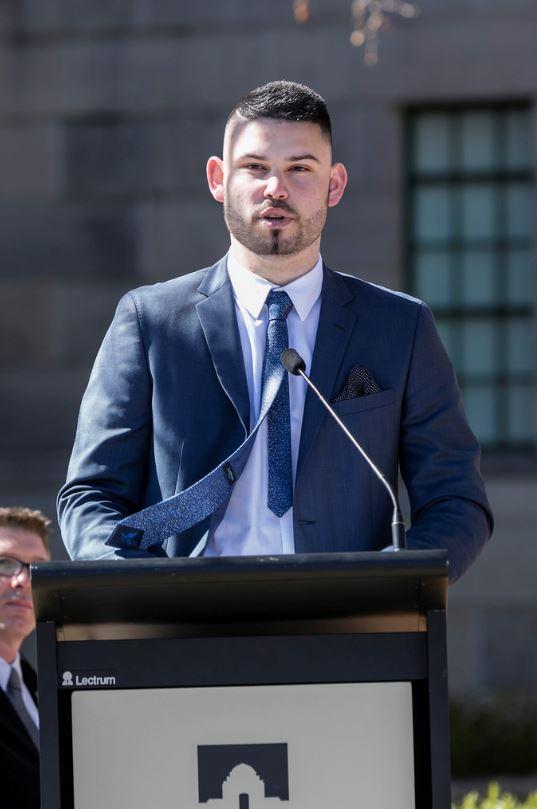 Mark MacInnes speaking at the launch of Legacy Week at the Australian War Memorial.