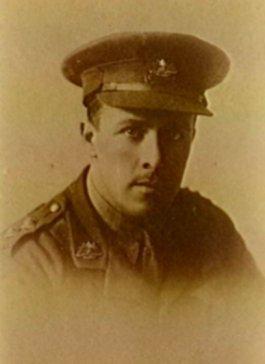 Stanley Colless was a 23-year-old wool-classer from Penrith, New South Wales who enlisted in the Australian Imperial Force in June 1915. The youngest in a family of nine children, he was known as a keen sportsman and a crack shot in recreational shooting competitions. Colless embarked from Australia on board the troopship Argyllshire in September 1915 as a sergeant in the 9th Battalion. He reached Egypt in early 1916, was trained in the operation of the Lewis gun, and transferred to the newly formed 55th Battalion during the doubling of the Australian Imperial Force (AIF). 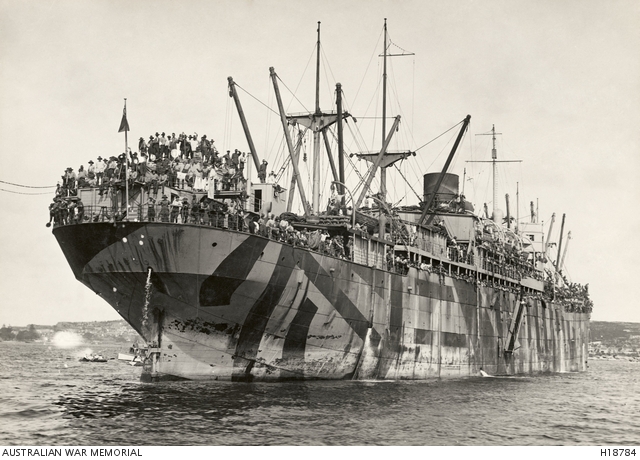 Colless was sent to France with his battalion in June 1916 and entered the front-line trenches near Armentieres the following month. A week later, the 55th Battalion entered its first major battle near the French village of Fromelles. The battle, which lasted 24 hours, was a disaster. The artillery barrage that preceded the battle failed to hit enemy lines, forcing advancing troops over the top and into a hailstorm of enemy fire as they attempted to push through no man’s land. By the end of the battle, Australian casualties amounted to more than 5,000 killed, missing or wounded. The battle was later described as “The worst 24 hours in Australia’s entire history”.

Sergeant Colless survived the carnage at Fromelles, and was awarded the Distinguished Conduct Medal for his role in the battle. His citation reads:

“He kept the teams of two guns working in the enemy’s second line from which he was finally driven out by overwhelming bombing parties. By his fine example he kept the teams steady and covered the retreat of his company, thus saving many casualties.”

After the battle, Colless was commissioned in the field, becoming a 2nd lieutenant. He was then sent to England where he served as a Lewis gun instructor for several months. After re-joining his unit in January 1917, Colless was promoted to lieutenant before joining the 14th Battalion for a brief secondment in March. He then returned to England to serve as an adjutant with the 14th Training Battalion where he was to remain for the duration of the war. Lieutenant Colless soon relinquished this appointment as adjutant, however, returning to France in October 1917. He spent the end of 1917 on leave, and re-joined the 55th Battalion near Corbie and Villers-Bretonneux in March 1918. It was here that Lieutenant Colless was awarded his second decoration for bravery in the field: the Military Cross:

“For conspicuous gallantry and devotion to duty in a raid on the enemy’s trenches. Strong opposition was encountered and as he led the final rush his party came under heavy machine-gun fire. He attacked the gun with his party and captured it, taking two of the gun team prisoners and inflicting heavy casualties on the enemy garrison. His men were attacked from the flank as they withdrew, but with seven men he covered the withdrawal of the remainder, causing further losses to the enemy. Owing to his splendid leadership and coolness the raiding party returned, having suffered only two casualties.” 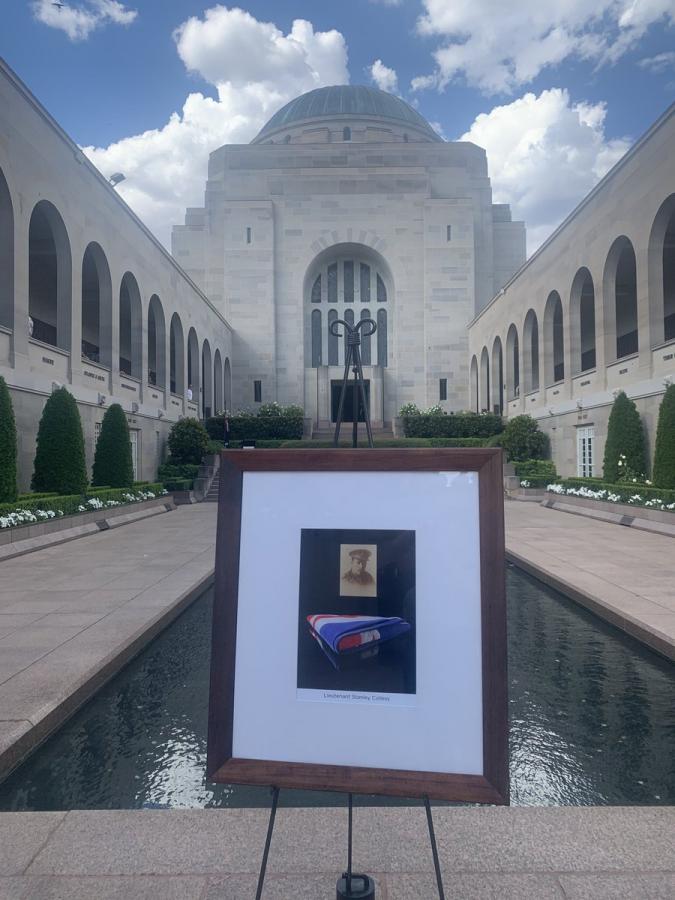 Stanley Colless was commemorated in a Last Post Ceremony at the Australian War Memorial on 25 January 2021. Photo credit: Meghan Adams

By August 1918, Lieutenant Colless had been serving with the AIF for more than three years. The allied offensive earlier that month crippled the enemy, and victory seemed increasingly likely. In what would become one of the final major battles of the war, Australian divisions were tasked with taking back the French towns of Peronne and Mont St Quentin. An attack was planned for the 1st of September 1918. Under heavy machine-gun fire, the 5th Australian Division pushed towards its objectives. During its advance, Lieutenant Colless climbed over the parapet and was hit by machine-gun fire, a bullet striking him through the head. Private Hubert Wade recalled the moment at which Lieutenant Colless was killed:

“I was beside him when he was hit by a machine gun bullet in the head. He fell at once on his side at the side of the trench and I believe he was killed instantly. He was an excellent officer, quite one of the best and was the most popular officer in the battalion.” 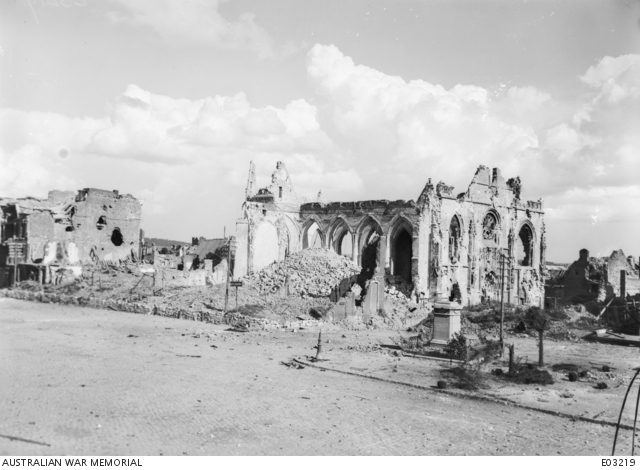 The remains of the shelled Church of Peronne. 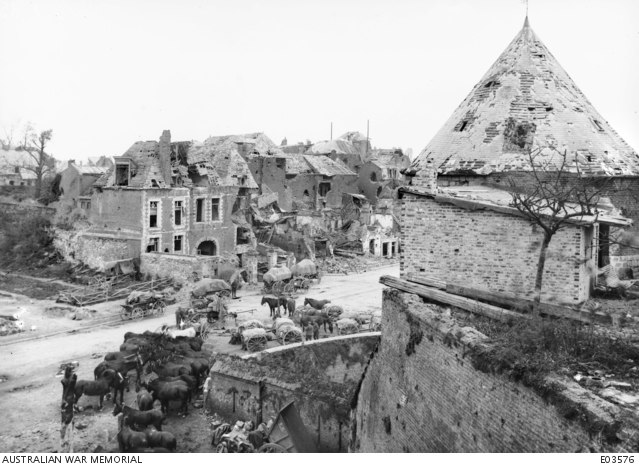 Australian transport halted in a ruined street of Peronne. The shell torn Citadel Tower can be seen on the right.

As news of Lieutenant Colless’s death reached his friends and family in Penrith, the Nepean Times wrote: “We trust it will be a consolation to the deceased soldier’s parents and family in their anguish of spirit at his demise to know that he died heroically, serving the cause of his God, country and civilisation.”

Lieutenant Colless joined the AIF in 1915 and fought through some of the war’s most difficult battles. He served as a non-commissioned officer and was later commissioned in the field, twice promoted and awarded two of the highest decorations for bravery. He rejected the safety of an adjutant’s role, instead returning to the front where he fought until he was killed in the final months of the war. Had he not returned to the front, he almost certainly would have returned to Australia in 1919. 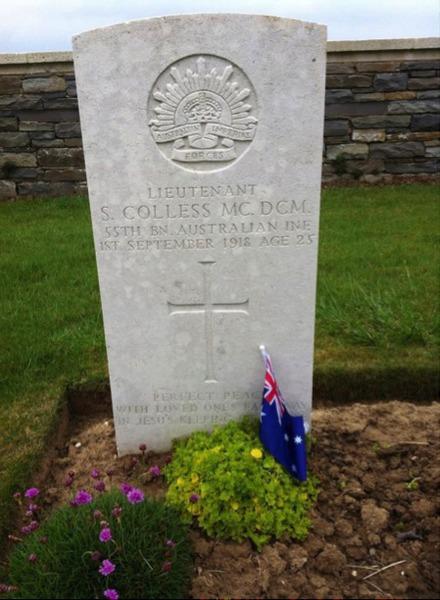 Lieutenant Stanley Colless was buried at Herbecourt British Cemetery, just outside Peronne under the words chosen by his family: “Perfect peace, with loved ones far away, in Jesus’ keeping he is safe.”