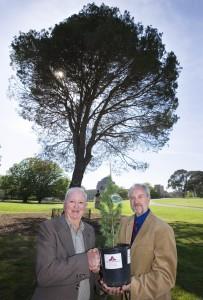 It has been 75 years since the Duke of Gloucester planted a tree in the grounds of the Australian War Memorial , in memory of all those who fought and died at the Battle of Lone Pine on the Gallipoli Peninsula on 6 August, 1915.

Men dressed in top hats and Boy Scouts from Braidwood, NSW, were among the crowd that attended the planting that warm Spring day on 24 October, 1934. The formal proceedings began at Parliament House, where a ceremony was held to mark the solemn occasion. The crowd then marched slowly through the valley and across the Molonglo River – there was no lake back then – to the site where the War Memorial was to be built, and watched on quiet and dignified as the Duke planted the tree.

Ray Hasler, a 13-year-old Scout, was part of that historic day. He returned to the Australian War Memorial last Friday to commemorate the anniversary of the tree planting and reflect on the many history-making events that have happened since that day.

Mr Hasler, now of Queanbeyan NSW, served in the RAAF during the Second World War. He was part of the aircraft ground crew stationed in the South Pacific.

He remembers well the day the tree was planted: “[There were] lots of people about, thousands actually. And not a tree in sight, bare as a paddock.”

“It was rather dignified, everybody stood to attention when the Duke moved and when he finished   [planting the tree] they all doffed their hats.”

The tree itself was “about as thick as your thumb, and up to about knee height”. Today, the Lone Pine stands at more than 20metres.

The tree was propagated from a pine cone that was sent to Australia by Lance Corporal Benjamin Smith, whose brother was killed in the battle for Lone Pine Ridge. Smith’s mother grew two seedlings, one of which was planted at the Australian War Memorial in honour of her own and others' sons who fell at Lone Pine.

Cuttings from the Lone Pine are now propagated and available from Yarralumla Nursery in Canberra.

Mr Hasler had planned to visit the tree on its anniversary with a mate, Jack Whitfield, who was also a Scout present at the time of the planting. Sadly Mr Whitfield died just weeks before the anniversary.

Australian War Memorial senior historian Peter Burness presented Mr Hasler with a seedling from the Lone Pine, which he accepted on Mr Whitfield’s behalf, and said that he would likely plant it in Braidwood.

"I hope one day, when it’s gone, like we all will be gone, they cut a section out of the butt of this tree and nominate what happened on each ring, each ring suggests a year of growth," he said.

"There’s 75 rings therein and they all tell a story, and it would be nice to read them."