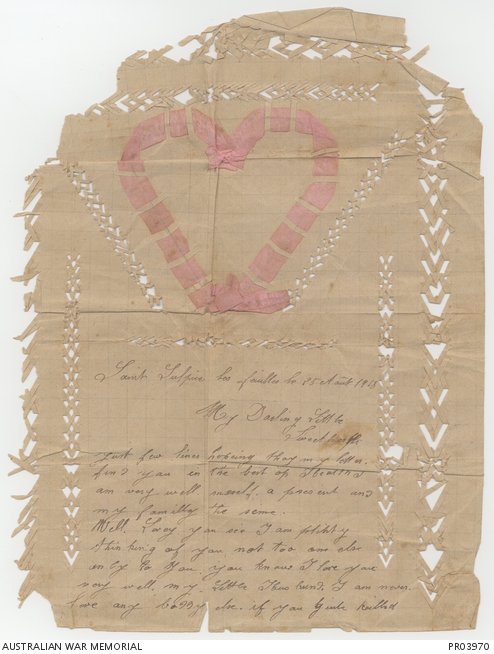 Collection consisting of a decorative love letter written by a young French woman, Marthe Gylbert, in August 1918, to an unidentified Australian soldier.

Those who regularly read the AWM blog might remember the Valentine’s Day blog post about a mysterious love letter from a young French woman to her soldier sweetheart.

This letter, and the mystery that surrounds it, created lots of interest. With the help of an enthusiastic member of the public, and her wonderfully helpful relative in France, we have since found a few more details about Marthe and her letter.

Marthe and her family were evacuated from Armentières, on the French/Belgian border, to Saint-Sulpice-Les-Feuilles during the First World War. Armentières was destroyed during the war and rebuilt afterwards.

It was in Saint-Sulpice-Les-Feuilles that Marthe met her sweetheart. However, the identity of Marthe’s sweetheart and his fate remain a mystery. The two never married as he rejoined his battalion and never came back to her. Marthe's nephew heard the story from his father but the family cannot recall his name after all these years. However, enquires continue and I’ll do another blog post if any more information turns up.

Marthe’s letter will be on public display as part of the Memorial’s Of Love and War exhibition opening in December.