Michael (Mike) Coleridge will always be remembered for the photograph he took on 26 August 1967 of a group of soldiers of 5 Platoon, B Company, 7RAR, waiting for an Iroquois helicopter to land and take them back to Nui Dat at the end of Operation Ulmarra. This photograph has become an Australian icon of the Vietnam War and is graphically featured on the Vietnam National Memorial on ANZAC Parade in Canberra. But this is just one of 558 still photographs and 54 films taken in Vietnam by Mike Coleridge in the Australian War Memorial's collection.

Coleridge was born in Slovenia on 11 July 1933. At the end of the Second World War his parents' marriage failed, and he accompanied his mother to Austria, before migrating to Australia as an unaccompanied 16-year-old. As a young man, he worked in a range of manual jobs in Sydney, always struggling to make his junior wages cover his expenses. At 18 he found work on a property in rural New South Wales, where his circumstances improved and his life assumed some degree of normality. A young man looking for adventure, he eventually found his way to Darwin. Life in the Northern Territory was exciting, and during this time he learnt to fly and was awarded a private pilot's license. 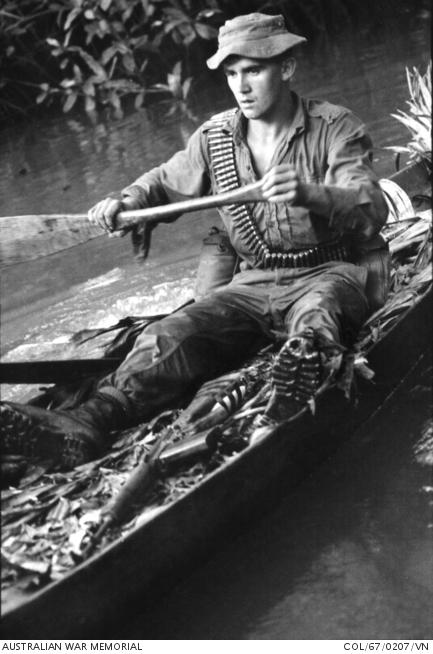 Vietnam. 1967. Private Peter Harding of Ballina (NSW), paddles out from the bank of a tributary

In 1957 Coleridge enlisted in the Australian Army, hoping to enter the fledgling Army Aviation Corps. Believing the recruiting sergeant's assurances that he could transfer after completing his recruit training, he signed up; however, his lack of formal education proved a barrier to army pilot training and he found himself a gunner in the Royal Australian Artillery Corps. He never realised his ambition to fly. Gunner Coleridge was posted to Malaysia in 1961, and during his tour he privately made films for the British Army using his own cameras.

On his return to Australia in 1963, Coleridge sought a transfer to the Royal Australian Army Education Corps as a public relations photographer. During this time he married and had two children. But his marriage failed, leaving him with his two children of his own and another his wife had brought to the marriage. Coleridge, now a single father, was posted to Vietnam. With much difficulty, and without any support from the army, he arranged for a family in Melbourne to care for his children. Sergeant Coleridge arrived in Vietnam on 19 November 1966, and although posted to Headquarters in Saigon, he spent most of his time at the new 1st Australian Task Force (1ATF) base at Nui Dat. Over the next 12 months he recorded the activities of 5RAR, 6RAR and 7RAR and other elements of 1ATF. There were no facilities at the 1ATF base for a photographer, so he constructed a makeshift darkroom, in which he developed his own films. 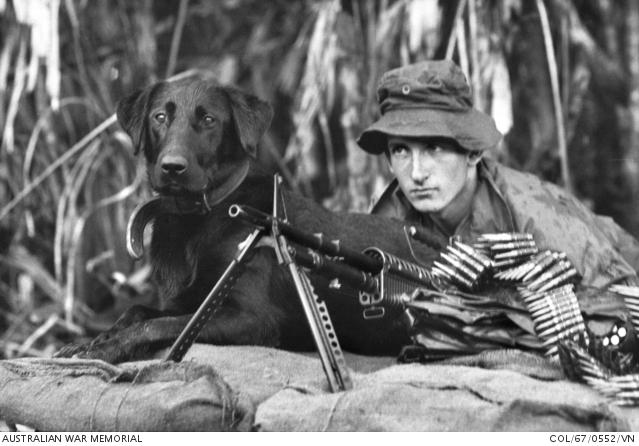 A digger with his dog and gun watch for the Viet Cong during Operation Paddington. Tiber 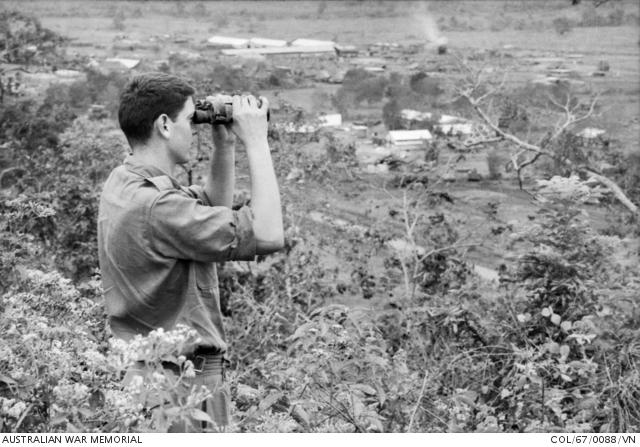 Vietnam. 1967. On top of Nui Dat hill, the highest point in the Australian Task Force area,

Coleridge operated independently, accompanying soldiers on operations, seeking out images to satisfy the needs of the Public Relations Officer in Saigon and taking many photographs in response to the conflict that surrounded him, including many shots of Australian soldiers moving through the Vietnamese landscape. Like many photographers of the time, he always carried a number of cameras, including 35 mm and 120 still cameras and frequently a 16 mm Bell and Howell movie camera. Using his own initiative, Coleridge started using colour film in both his still and movie cameras. However, the army was geared to providing the print media and TV with black-and-white images, and so initially it didn't support Coleridge's use of colour. Because the army only supplied black-and-white film, colour film and colour stock either had to be traded with other photographers or purchased privately. Colour film had to be processed privately in Saigon, and as most of his salary was spent supporting his three children back in Australia this must have been very difficult for him. Many of Coleridge's colour film stills, and the colour films of the photographers who followed him, were duplicated in black-and-white for use in the media. Coleridge's persistence was eventually rewarded by the Army Public Relations Directorate in Canberra: a signal sent to Saigon in September 1967 acknowledged both the high standard of the colour footage and the fact that Coleridge had provided the colour stock personally, and advised that replacement stock would be dispatched from Canberra.

After completing his tour of Vietnam on 21 November 1967, Coleridge was posted to Melbourne. His period of enlistment had expired and he resisted the army's efforts to keep him, realising how difficult it would be to continue serving as a single father. 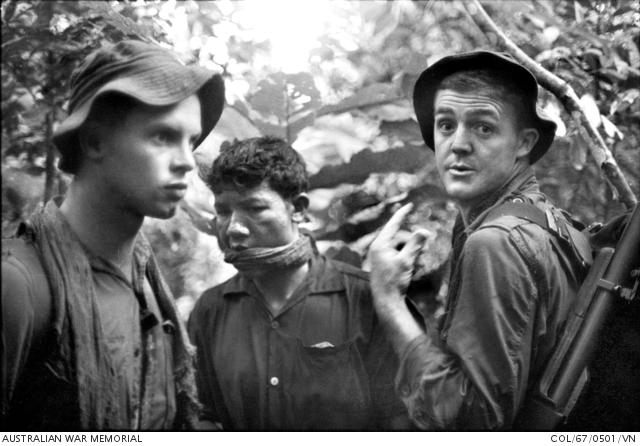 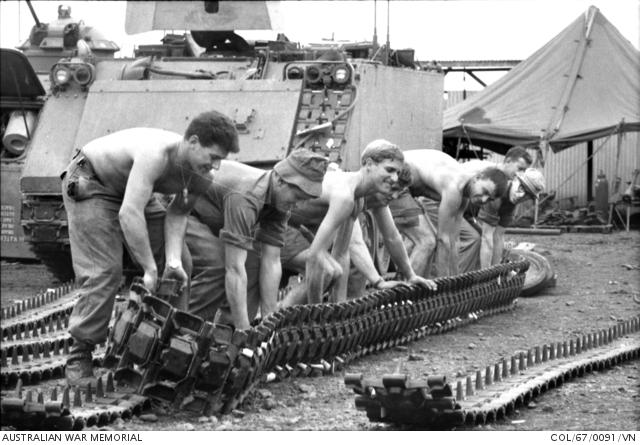 Vietnam. 1967. The tracks of armoured personnel carriers of A Squadron, 3rd Cavalry Regiment, ...

Over the decades that followed the war, Mike Coleridge traveled the countryside, finding work wherever he could. He worked for a time as a photographer for the Melbourne Truth and at other jobs, always supporting his two children. He moved to Darwin and then, in the early 1970s, to North Queensland, where he drove steam locos in the cane fields; from there it was on to Western Australia, where he mined gold, before moving to New South Wales. He and his children settled in Canberra in 1984, where he worked for a time as an attendant at the Australian War Memorial. With his children now grown up, he found some relief from his responsibilities and began growing walnuts on a small property at Jerangle, New South Wales. His final move was to a property on the outskirts of Braidwood, where he raised Angus cattle. 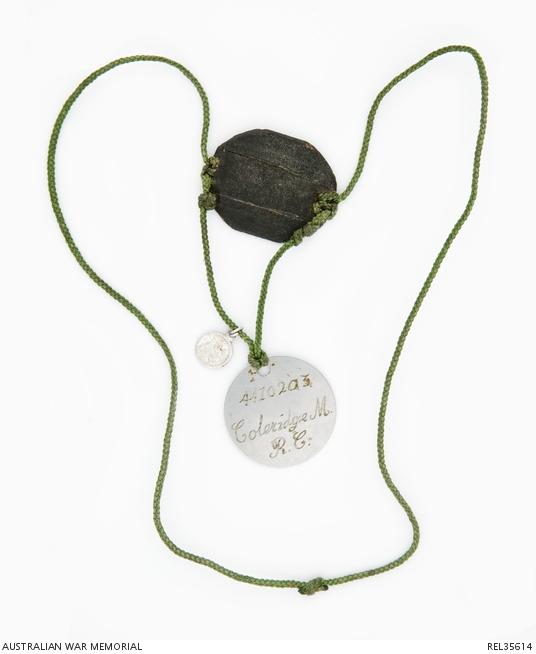 Like many Vietnam veterans, Coleridge experienced a range of health issues, including first cancer of the bladder and more recently lung cancer. Just before Christmas 2011 he had a bad fall in his house and was taken by ambulance to the Braidwood Hospital. He was transferred to hospital in Canberra, where an X-ray revealed he had two fractured vertebrae in his lower back.

Michael Coleridge passed away peacefully in hospital in the early hours of 10 January 2012. He is survived by his son, David, daughter, Rhonda, and granddaughter, Julia.