The below article was presented as a talk at the Memorial on 25 August 2017.

On 25 April 1915, a farrier from the small town of Childers in Central Queensland landed on Gallipoli with the 9th Infantry Battalion. Sergeant Joseph Cecil Thompson’s personal diary concentrates on recording the activities of the sixteen stretcher-bearers under his command. He does not mention his position as Bandmaster of the 9th Infantry Battalion Band, or that at least two of these stretcher-bearers were trained musicians. So begins the story of musicians under fire during the First World War.

Bandsmen were trained soldiers expected to support their battalions in battle. Regulations prescribed that 25 bandsmen could remain behind the lines but they had to be prepared to move to the Transport Lines and assist as carriers during emergencies. Sergeant Thompson and his stretcher-bearers of the 9th Battalion were among many bandsmen who became stretcher-bearers when their units were mobilised. Others carried food up to the trenches on the Somme or took part in combat.

Establishing battalion bands required a supply of sheet music, instruments and trained musicians. Instruments were donated by wealthy individuals or acquired with the assistance of organisations like the Victoria Racing Club, Queensland Patriotic Club and the West Australian Trench Comforts Fund. Enterprising units organised their own concerts to raise the money, while other bands drew upon personal supplies of sheet music and instruments brought from home.

Bandsmen became ill, went on leave, or were killed and wounded just like other soldiers during the First World War. Only 8 of the original 31 members of the 15th Battalion Band remained after Gallipoli; their bandmaster, William Frederick Crane, was invalided back to Australia before the end of the campaign. On Gallipoli, Crane received three hearty cheers for what was to be his final public appearance with the battalion, at a concert in the trenches at Walker’s Ridge on 2 August 1915. The author of the 15th Battalion history, T.P. Chataway, later described Crane at this event as “the moving spirit of the evening, and his sparkling humour was just the tonic his war-weary comrades required.” He had been the bandmaster since the days when the battalion was encamped at Broadmeadows, Victoria, before embarkation. The role of bandmaster was later taken over by Private William Joseph Speirs.

There were many other casualties among the bandsmen as well, including Alexander Burton, a member of the 7th Battalion Band who was killed during the battle of Lone Pine. He received a Victoria Cross for his actions.

With other battalions in similar situations, it was suggested that composite bands be formed at brigade level. Attempts to re-form battalion bands when units returned to Egypt, or after arriving in France, were met with mixed success. Chataway later recalled that the 15th Battalion band continued as a “sad affair” for two years after Gallipoli and “once or twice sounded like a band”. Late in the war, the 13th Battalion Band called for volunteers interested in learning an instrument and reading music. It was one thing to establish a battalion band, another to continue its existence.

By 1916, the importance of battalion bands was firmly established with orders from various division headquarters requesting that every battalion or brigade should have a “band of some kind”. These ranged from brass and pipe bands through to the efforts by the Fourth Division to establish mouth-organ bands. The nature of warfare and the dual roles of bandsmen meant that this was not always an easy task. Casualties among bandsmen continued.

Two members of the 20th Battalion Band, Bandmaster Shaw Wood and Jack McNeill, were killed on 5 May 1916. Charles Taylor and five other bandsmen of the 34th Battalion were wounded during their defence of a Lewis gun in 1918. Private Albert Bowring, of the 15th Battalion Band, was wounded in action during the battle of Hamel and died from his wounds on 4 July 1918.

Battalion bands assisted with maintaining troop morale and entertained troops when they were out of the lines. Hymns at church parades, concerts at football matches, accompaniment during route marches, and playing battalions to their destination were all part of the call of duty for battalion bands. This required skills in various musical styles; Charles Taylor’s diary reveals that he spent several days practising “all morning and afternoon”.

The dedication and musical talents of bandsmen were generally appreciated for cheering up their audiences. The 9th Battalion Band was complimented on their “thoughtfulness” for playing Veni, Vidi, Vici as Colonel Salisbury and his battalion marched through the French village of Dernancourt. Similarly, 13th Battalion Bandmaster Percy Copp asserted that only the band could dispel the misery of spending two weeks aboard a crowded troopship.

Battalion bands contributed to the lighter side of war through their keen sense of humour and willingness to engage in new experiences. These bands had the ability to read the mood of their audience and used this to strike up melodies that seemingly fit the occasion. On the second day of a march from Tel-el-Kebir to Ferry’s Post by the 53rd Battalion, the 14th Brigade Band struck up a merry rendition of It’s a long way to Tipperary and a report of the event stated, “The Band was quite right … if Tipperary represented our halting place.”

It is debateable whether Captain Reginald Harriman Heywood, a veterinary surgeon from Malvern, Victoria, was in good spirits when he awoke at 6 am on Christmas Day 1917 to the strains of the 15th Battalion Band playing Christmas carols. He noted that the band continued to play until the instruments had frozen. This was an occupational hazard, mentioned by Richard Roberts, a member of the 3rd Battalion Band:

The extreme cold was still with us, and gave our fingers a caning when playing on the route marches; no distance could be covered along the roads before they would be blue with the cold. To stop playing, meant warming the instruments at braziers along the route before we could strike up again, the valves would be frozen hard.

There were other benefits to being part of the battalion band, as Roberts noted about a concert party that the band supported:

The band was engaged to fill the bill of the orchestra, and although we saw the same artists every night, we enjoyed the shows as much as anyone. More in fact, as we could go right through the performances, and give a repeat in burlesque after our return to billets, and various liquids of dixies had been swamped.

Battalion bands were also called upon to respond quickly to unexpected events. Copp relates the arrival of the 13th Battalion for the Armistice Thanksgiving Service in Amiens Cathedral on 18 November 1918. The band was to play the Te Deum during this service. They were presented with ancient Gregorian sheet music that had not been performed in the cathedral for around 200 years. One can only imagine their reaction on this occasion, but they set about transcribing the score into modern musical notation, arranged the band parts, and played the music at the service 24 hours later.

Ingenuity was also required by bandsmen, particularly those musicians involved with the Anzac Mounted Division Band. These men were given the task of training white Sudanese donkeys to walk in formation while the band played. To resolve this, the four leading donkeys were tied together with their head ropes and led by the drummers of the band.

Perhaps one of the most moving stories involving battalion bands during the First World War, surrounds story of the 5th Infantry Brigade Band marching through the town square of Bapaume as they played the Victoria March on 19 March 1917. The band was led by Bert Peagam, of the 19th Battalion, and of this event he writes:

The day after Bapaume was captured I entered that town with my band, and we played in the streets while the official photographers were taking moving pictures of us as we marched through the streets of ruined and burning buildings. We gave programmes every afternoon in the square, opposite the big Town Hall before it was blown up. … We were in Bapaume for nine days and were billeted about two hundred yards away from the Town Hall when it was blown up at 11.20 pm. 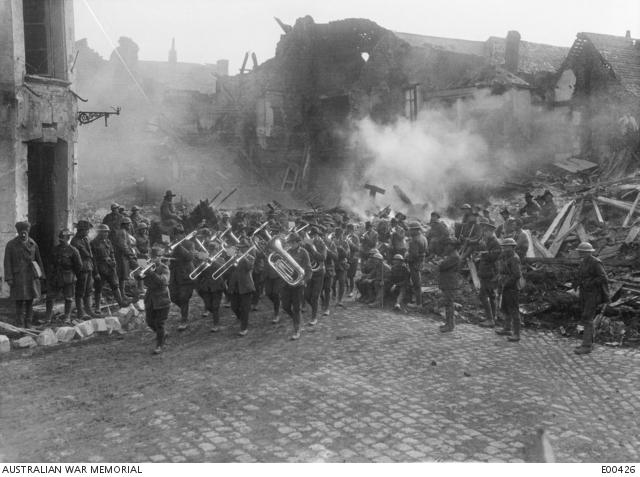 The Band of the 5th Australian Infantry Brigade, led by Bandmaster Sergeant A Peagam of the 19th Battalion, passing through the Grande Place (Town Square) of Bapaume, playing the 'Victoria March'. E00426

Percy Copp stayed in England until 1920, to ensure that every troopship returning to Australia had a band on board. When he did return to Australia, he rejoined the community band scene and used his experience to become bandmaster of several. John Henry, the conductor of the 15th Battalion Band, was another bandsman known to have returned to community bands in Ipswich, Queensland, after his return to Australia. At a welcome home to returned band members on 2 March 1920, both he and his wife Helen were recognised for their efforts in supplying the Ipswich Vice-Regal City band with approximately £30 worth of new music during the war. It is presumed that this was a joint effort of the music being posted from overseas and then passed on to the band when it was received in Australia.

Battalion bands were an important part of the Australian Imperial Force during the First World War, despite their unofficial status. They entertained fellow soldiers, maintained morale with their keen sense of humour, and adopted various roles when their battalions were mobilised. There are many other stories about what the bands did, too many to incorporate here, but I’ll finish with a quote from Percy Copp: “The battalion bands did their job.”