‘An artist draws with his head, not his hands’ 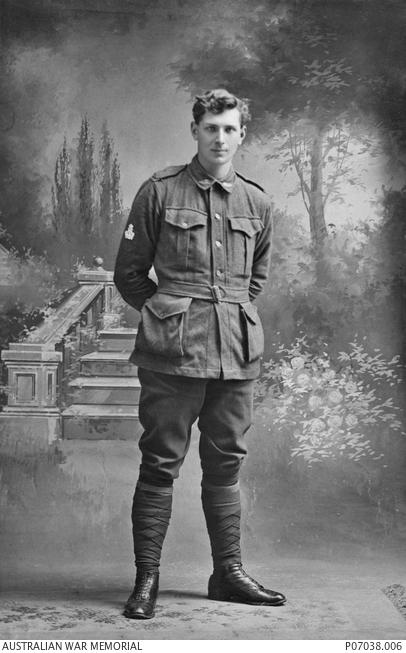 Studio portrait of Mervyn Napier Waller during the war.

Artist Napier Waller lost his right arm after being wounded in the fighting at Bullecourt in 1917, but he never lost his love of art.

Determined to paint and draw again, Waller taught himself to use his left hand, and went on to become a noted Australian muralist, mosaicist and painter, creating the magnificent mosaics and stained glass in the Hall of Memory at the Australian War Memorial.

Each year millions of people are moved by his work surrounding the Tomb of the Unknown Soldier, but Waller’s own story is also one of remarkable courage and determination.

Born Mervyn Napier Waller at Penshurst in country Victoria in June 1893, Waller left school at 14 to work on the family farm before moving to Melbourne in 1913 to study drawing and painting at the National Gallery schools.

He exhibited some of his watercolours and drawings at the Victorian Artists’ Society in 1915, but decided to put his artistic career on hold to serve on the Western Front during the First World War.

He enlisted with the 22nd Battalion, AIF, in August 1915 and trained at the Royal Park Camp in Victoria before being transferred to the artillery.

He married fellow art student Christian Yandell in October 1915, and embarked on HMTS Medic in May 1916 to complete his military training on Salisbury Plain in England.

By the end of 1916, Waller was serving with the 111th Howitzer Battery, 4th Division, in France. There he used his diary to detail his experiences at the front, complaining of the never-ending mud and cold, and making sketches of the scenes around him.

He had already taken part in a number of battles when he was severely wounded at Bullecourt in May 1917 and had to have his right arm amputated at the shoulder. During his convalescence in France and England, he trained himself to write and draw with his left hand, later reflecting that “an artist draws with his head, not his hands”. 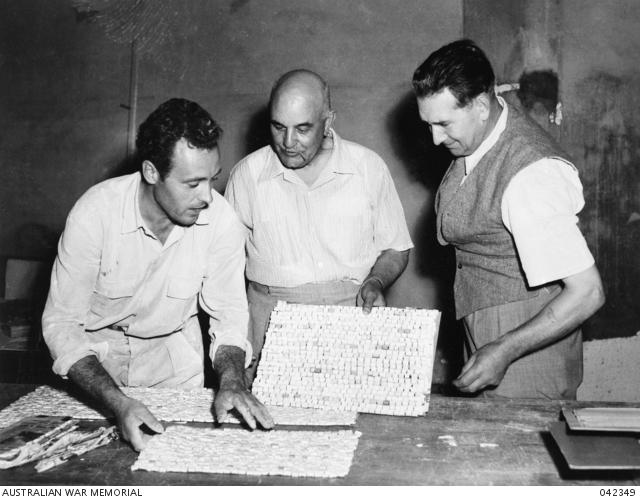 Napier Waller, right, examining the mosaic with Aldo Rossi and Severino De Marco prior to the first fixing in the Hall of Memory at the Australian War Memorial.

When he returned to Australia in November 1917, Waller resumed his work as an artist and completed a series of images called War sketches in black and white, watercolour and oil which were exhibited in 1918 and 1919 in Melbourne, Sydney, Adelaide, and Hobart. Based on his experiences on the Western Front, the works were mostly created while he was on active service and in camp, but some were made after his injury and based on earlier sketches.

Over the next two decades, Waller established himself as a noted mural artist and mosaicist, undertaking large-scale commissions for the Menzies Hotel in Melbourne and the State Library of Victoria.

Visiting Europe in the late 1920s to study stained glass, Waller travelled to Italy where he was deeply impressed by the Byzantine mosaics in Ravenna and went on to study mosaic in Venice. When he returned to Melbourne in 1930, he began to work almost exclusively in stained glass and mosaic. He completed a monumental mosaic for the University of Western Australia in 1931, followed by two important commissions in Melbourne: the mosaic façade for Newspaper House and the murals for the dining hall in the Myer Emporium.

In 1937, the Memorial invited Waller to design and install the stained glass windows and mosaics for the Hall of Memory. The stained glass windows were installed from 1947 to 1950 and Waller worked on the mosaics from 1955 to 1958. During that time, six million tesserae were attached to sheets of paper for the artwork with the help of his art students and war widows in Melbourne, creating one of the largest single mosaics in the world. Despite having only one arm, Waller was actively involved in the entire process.

Today, Napier Waller is also remembered at the Memorial through a new $10,000 art prize which has been named in his honour.

The inaugural Napier Waller Art Prize is open to current and former Australian Defence Force personnel and aims to promote the healing potential of art while raising a broader awareness of the military experience and the impact of service on the individual.

The winning entry will be displayed at the Memorial and the winner will also receive a two-week research residency in the Art Section of the Memorial, and a mentoring day with official war artist Ben Quilty. There will also be a $5,000 People’s Choice award.

Entries close Wednesday 11 July 2018 and the winner will be announced in September. An exhibition of the highly commended entries will be displayed in Anzac Hall’s mezzanine area from 20 September to 25 November 2018.

Learn more about the Napier Waller Art Prize and how to enter.