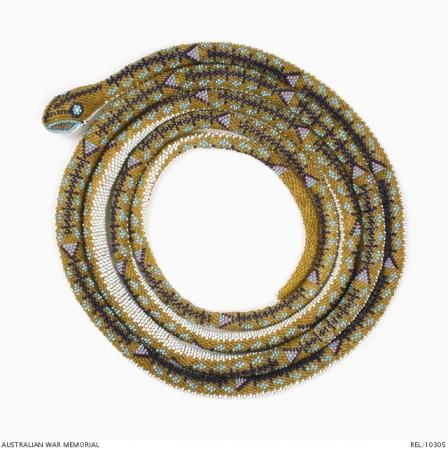 Beaded snake made by an Ottoman prisoner of war 1917.

During captivity, Ottoman (Turkish) prisoners used small glass beads to fashion snakes, lizards, bags, belts, bookmarks and jewelry. They would sell these creations to earn money in order to supplement their rations and purchase useful items. Some prisoners used them to barter with other prisoners, or sent them home as gifts. Crochet beaded snakes were the most popular of the beaded souvenirs created in the prisoner of war camps.

Limited information exists about the design and manufacture of these items. It seems that wherever there were major prisoner of war camps holding Ottoman prisoners – including Egypt, Great Britain, Salonika, France, and Mesopotamia– beadwork items were made.

The Memorial holds a snake believed to have been made in Malta in 1915. Due to the large number of prisoners held in Egypt, it is likely most prisoner of war beadwork was made there. Unfortunately, information about the provenance of most items has been lost. As there are similarities in designs and techniques between different camps and countries, it can be difficult to determine where the items were made.

In the United Kingdom, these handicrafts were sold by charities and societies involved in assisting prisoners. In Egypt they were sold in stores. The relationship between maker and seller was a two-way street, and some existing items show it was possible for items to be commissioned. The Memorial’s collection includes, for example, a personalised loom work belt made for Lance Corporal Edward “Ned” Harris.

Nearly half the items in the Memorial's collection of beadwork are snakes. Snakes are a symbol of good luck in parts of south-east Europe, perhaps giving them symbolic importance for their makers. A snake is basically a tube, which is a very easy shape to make with bead crochet. Beadwork snakes were made following a pattern from tail to head, with two basic designs on their backs: zigzag or diamond. Within both these options though there are many variation in the colours and complexities of the designs.

The bellies of the snakes are generally white, with beaded text in black or dark blue. Sometimes other colours were used. (The Memorial holds one snake with a gold belly and white beaded text.) The text on the belly usually says “TURKISH PRISONER” and a year of manufacture. However, this does not mean that all the prisoners who made the items were ethnically Turkish. The Ottoman Empire stretched from the Balkans to the Sinai. This means that the makers could have been Turkish, Kurdish, Arab, Greek, or Eastern European.

While fashioning the general shape of the snake is time consuming, it is not difficult. Ensuring that beads are correctly threaded in order to follow the design, and accommodating for any “twist” in the beaded crochet process, takes attention and skill. Some snakes in the collection illustrate how incorrect threading can lead to mistakes in the snakes.

While rarer than snakes, beadwork lizards were also made by prisoners. Small lizards would sometimes be combined with snakes, placed in the snake’s mouth. An example is held in the Memorial’s collection. (Unfortunately, by the time the item was donated in 1990 the lizard had lost its legs and was initially identified as a fish.) 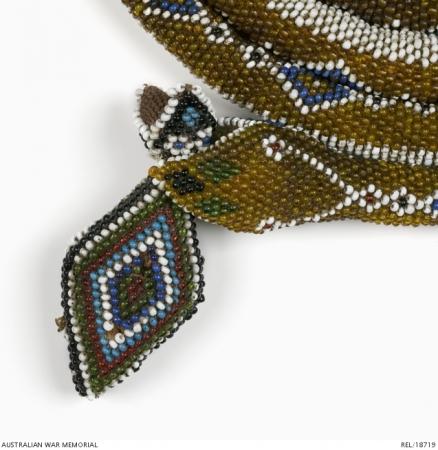 Detail of a beaded snake with a lizard in its mouth.

The lizards have the same shaped head as the snakes, but their bodies are wider and shorter. Larger lizards were made and sold individually. Legs were attached to the body and had wire running through them. 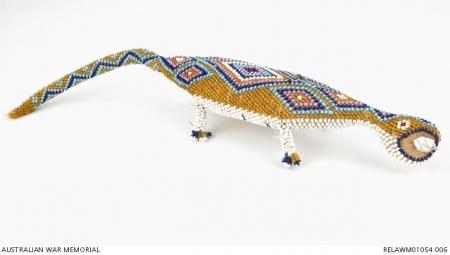 Necklaces and bracelets were also made by prisoners. Two main types of necklace were made. The Memorial holds examples of each. One has 21 large crocheted “beads” with a triangular pendant and is sometimes incorrectly referred to as Muslim prayer beads (misbaha). Misbaha have 99 beads (or sometimes 33, to be cycled through 3 times), and prisoner beadwork tends to lack the requisite number of beads. Other necklaces have a long tube of two alternating colours, also finishing with a triangular pendant. Occasionally combinations of both designs appear in the one necklace. 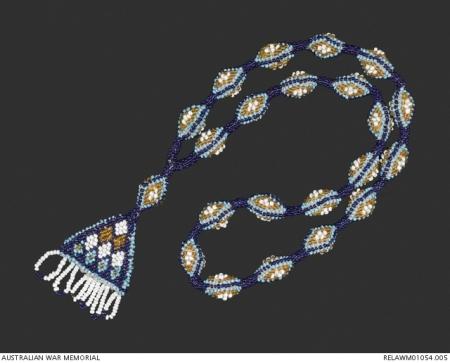 Necklace made by a Turkish prisoner held at Ghezira. Purchased for the Australian War Records Section on 13 January 1919. 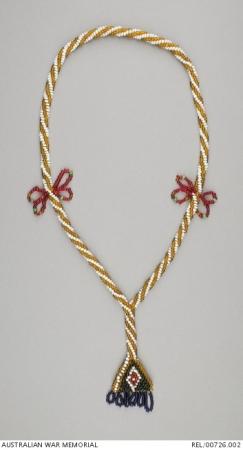 A necklace with a spiral design in gold and white.

Prisoners made two types of purses: purses with loom work openings and beadwork netting bodies; and beaded crochet purses, made in a similar fashion to the snakes and lizards.

The loom and netting purses have a loom work opening. 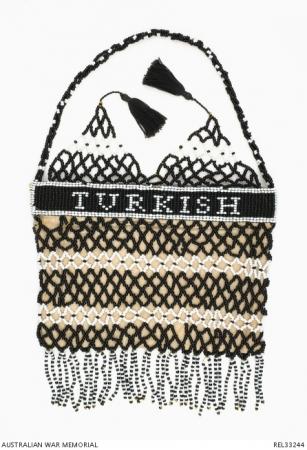 Turkish loom and netting beaded purse. On one side of the purse, the loom work reads “TURKISH”, on the other is “PRISONERS".

Crochet beaded purses were made using the same techniques as beaded snakes and lizards. More common patterns include a lion rampant, and two birds facing a tree. As with most other prisoner beadwork, these items usually feature the words “TURKISH PRISONERS” along with a date of manufacture. They are similar in shape to a miser’s purse, or money pouch.

Small looms were also used to make what are often referred to as “bookmarks”, although their actual intent is unknown, and belts. The bookmarks are the more common of the two, and usually contain the text “TURKISH PRISONERS”. The belts are less common.