'Our Hero We're Proud of Him' : Patriotic Crochet in the First World War

Filet crochet was a popular craft before and during the First World War. Women would make decorative or functional items for the home such as tray cloths, milk jug covers, tea cosies, tablecloths and cushion covers. They also made decorative items for clothing, such as crochet lace collars or cuffs. During the First World War patriotic military themes were popular. Images such as ships, flags, soldiers and medals, along with slogans such as: ‘Success to the Allies’, ‘God bless our brave boys’, 'God bless our khaki boys' and ‘Our hero we're proud of him’ were available. 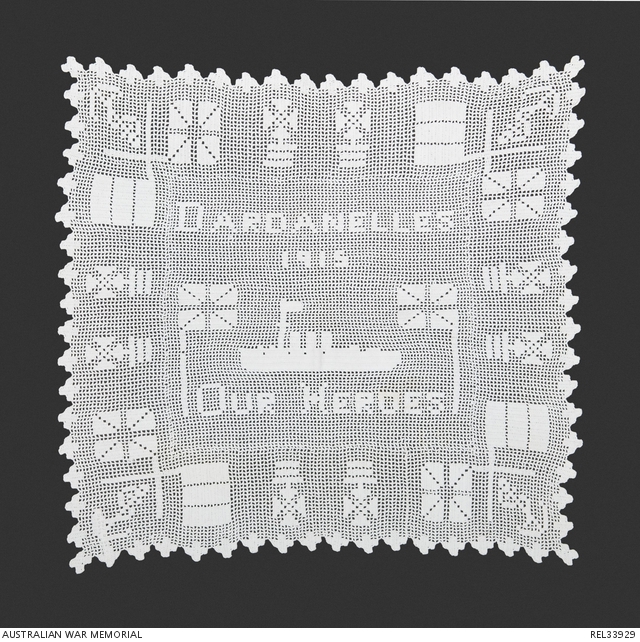 Patterns were published in popular ladies magazines and newspaper supplements. Often individuals would mix and match designs, creating a wonderful variety of items, or they would combine them to create large items, such as bedspreads. The magnificent bedspread below is 260 cm x 200 cm and was made by Mrs Mary Griffith of Cathcart, NSW. Rather than crochet each pattern individually and sew or crochet them together, she drafted a design for a seamless bedspread with the help of one of her daughters, combining the many patterns she held. 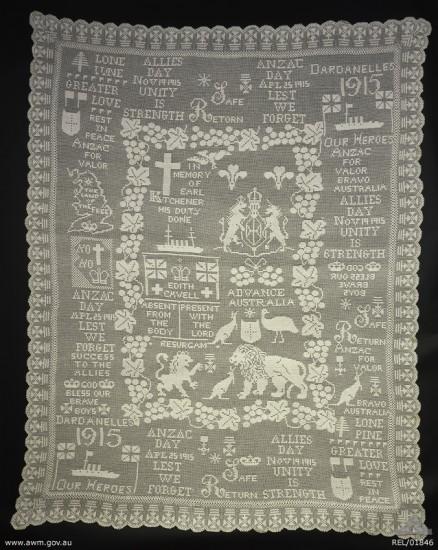 Sometimes the makers would personalise their items to commemorate a specific serviceman. The cloth below was made to commemorate the death of Private Cecil Atherton. Atherton served in France with the 21st Battalion for only three months before he was mortally wounded by a shell on 20 March 1917. The design was adapted from one published in women's newspapers and magazines in about 1916 which commemorated the death of Earl Kitchener. 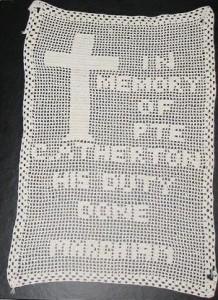 In addition to decorating the home or commemorating a loved one’s service, some items were made and sold at fetes and fundraising events for the war effort. One famous Australian designer, Mary Card, created a number of filet crochet doilies. She sold the patterns to the public, donating the money to war charities and also encouraged women to sell items made from her patterns to raise further funds for charity. Her most famous pattern was of an Australian soldier, which she designed in 1916 to commemorate the ANZAC landing on 25 April 1915. In 1918 she designed a matching sailor, which was published in October - a month before the First World War's end. 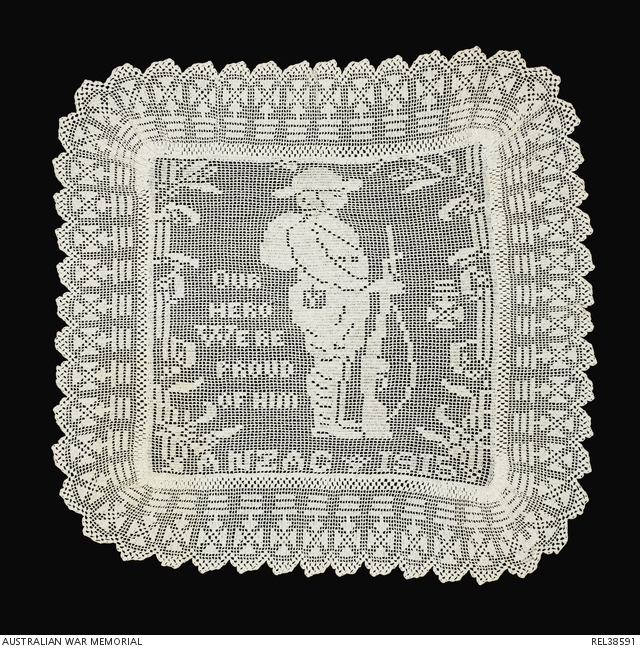 The cushion cover above is a nice example of how different designs were mixed together. The maker took Mary Card's Australian soldier pattern, which included the wattle and leaves design and the text 'ANZAC 1915' and added a Victoria Cross and the text 'OUR HERO WE'RE PROUD OF HIM', along with an elaborate scalloped edging, made up of a repeated pattern of Victoria Crosses. 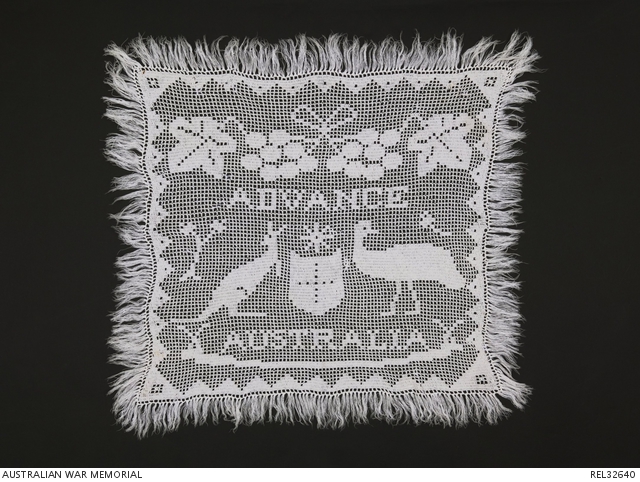 Not all patriotic crochet motifs were of a military nature, as shown by this Australian coat of arms tea tray doilie.

The filet crochet cloths in the Memorial's collection are a tangible link with women on the home front, illustrating how they displayed their support for the war effort in their homes and commemorated  loved ones and important events.