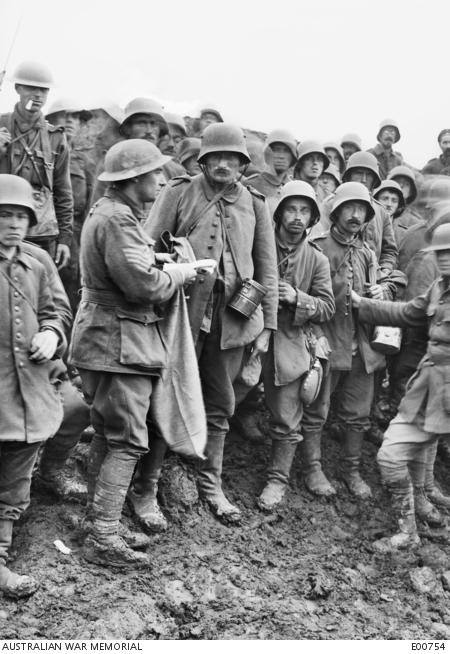 Along with the intensity of the fighting, the horrendous conditions and the heavy losses of Passchendaele, there is another reason why this campaign universally symbolises such great loss, tragedy and futility above others of the First World War.  This is simply because such a high percentage of men experienced it.  During the three and a half months it lasted, just over fifty British and Commonwealth infantry divisions, and almost one hundred German ones were committed.  It is therefore reasonable to say that about one and a half million men witnessed this battlefield first-hand.

In such a tiny sector of the front, it is difficult to fathom how so many men could have been involved.  Across the whole frontage of the sector, only about 10 miles in width, both sides would normally have 10-15 divisions at any one time.  But behind them in reserve positions lurked many more, ready to come up in support to either exploit a breakthrough, or (in the case of the Germans), stop one.  Due to the intensity of the battle, some units would go into the front line and be decimated in a matter of days so they had to be pulled out and replaced by another division.  This went on over and over again; some divisions went in only once, while others were committed several times.  It is also worth noting that as the campaign progressed, the frontage under attack gradually narrowed until at the end, it was barely one mile in width (see map).

Other arms of service supporting the infantry were also in the thick of the action, especially artillery, engineers, supplies, signals, tanks and medical services to name a few.  In the case of the Australians for example, while their infantry was committed to six of the eight phases of the campaign, their artillery was involved for its entirety.

The following illustrates the high proportion of divisions committed to Passchendaele throughout the second half of 1917:

A useful comparison is the dreadful campaign at Verdun; during this ten-month ordeal in 1916 that cost at least 700,000 French and German casualties, three-quarters of the infantry divisions in the French Army went through it.  For the French, Verdun is symbolic of their great sacrifice and the main focal point of their commemoration.

Total casualties at Passchendaele are estimated at 475,000; about 275,000 British and Commonwealth and about 200,000 German.  38,000 Australians, 15,654 Canadians and 5,300 New Zealanders fell there, either killed, wounded or missing.  Especially for these smaller nations, Passchendaele was their most costly engagement of the war, indeed their entire military history.  Because of the scale of losses and the fact that the Commonwealth nations committed their entire forces to the campaign, it was sadly not uncommon for families to lose several members during it (see article on Polygon Wood battle).

With these statistics in mind it is little wonder that after the war ended, the Ypres-Passchendaele area quickly became the focal point for commemoration for all the nations involved in this terrible campaign, and remains so to this day.