Records of the Royal Australian Corps of Signals

Official Records is pleased to announce that arrangement and description of the records of the Royal Australian Corps of Signals are now complete. The records have been assigned the series number AWM277, and are catalogued to the National Archives of Australia database, RecordSearch. 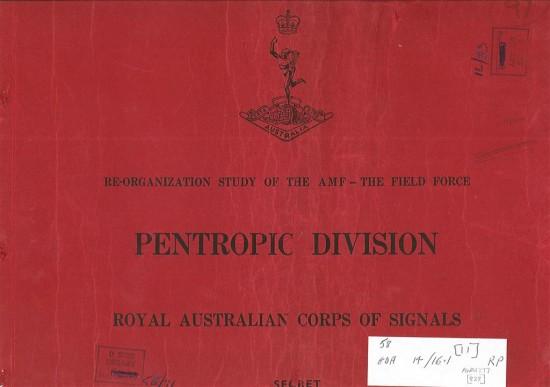 The basis of this series is the documentation created by units of the Corps to acquire, deploy and evaluate electronic warfare equipment from 1939 to 1997.

The Royal Australian Corps of Signals accumulated records detailing performance characteristics not only of its equipment, but the control and command structure and the many inputs used to determine its capability. The oldest item in the collection is a 1939 edition War Book of the Australian Military Forces. More recent material, such as item 296, describes Christmas Day 1974, when Cyclone Tracy struck Darwin and the Corps helped mount the aid and recovery effort.

As a technical collection of records, material usually associated with the conduct of military operations abroad - such as monthy war diaries, routine reports and orders - is not a feature of this series.

Reorganisations within the Department of Defence led to the disbandment of a number of these units. The records they yielded were arranged by security classification and dispatched to the Directorate of Communications (DCOMMS, later DSIGS – Defence Signals). Further adjustments and closures within the Defence organisation saw the records consigned to long-term storage. In 1999, the Australian War Memorial took custody of the records, later accessioned as AWM277.

Select the "Advanced Search" tab on RecordSearch. Click on the "Series" link and enter the series number. Refine your search by keyword or date. The records of the Royal Australian Corps of Signals are managed as Official Records according to the Archives Act 1983. Though all the records are catalogued to RecordSearch, only those in the "Open" period will be searchable (that is, from 1939 to 1981). "Not Yet Examined" material will need to be access examined prior to release. An "Open With Exception" item contains some material exempt from disclosure under the Act.

To view material, you are invited to visit our link online request system or visit the Memorial's Reading Room. An "Application for Access (S.40)" form will need to be completed for items with an access status of "Not Yet Examined."