In the last few days has come news of an important discovery for First World War historians (especially family historians), in the archives of the Red Cross in Geneva, Switzerland.  British historian Peter Barton, commissioned by the Australian government to conduct further research into a mass grave at Fromelles in France, made the find.  The records consist of ‘card indexes and registers compiled between 1914 and 1918; during that period the Red Cross had acted as a go-between, logging, and passing on information to 30 countries drawn into the conflict.’

Details include the whereabouts and condition of men taken prisoner by the Germans and the location of field burials. Astonishingly it seems no one has ever conducted research into, or used these records until now.

Barton stated, "To a military historian, this was like finding Tutankhamen's tomb and the terracotta warriors on the same day..."

While Red Cross records have not survived in some countries (such as the UK), those of the Australian Red Cross did, and are held here at the Australian War Memorial.  The unearthing of the corresponding records at this central archive in Geneva may prove a useful source for cross-checking the Australian records, or for conducting further research.

The Wounded and Missing Enquiry Bureau files have been digitised and are available to view online. 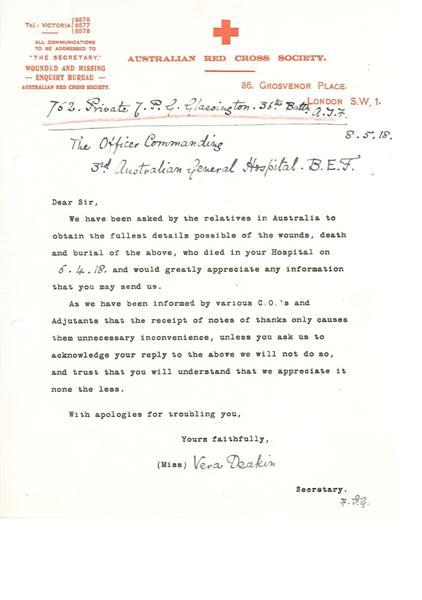 When the first lists of the Australian casualties at Gallipoli were published, as far as most people were aware, news about the fate of their soldier relatives could only be obtained through the Australian Imperial Force Base Records Office, located in Melbourne.  For most, dealing with the Base Records Office was a frustrating process; the office quickly became overwhelmed with correspondence from families, they were painfully slow to obtain information from overseas and were often just as ill-informed as the families.

The British Red Cross Society (BRCS) had done splendid work in France and had formulated a system by which they supplemented the work done by the War Office, and, later, a branch of the BRCS was established in the Mediterranean with Alexandria as its headquarters and stations at Cairo, Malta, Mudros and Salonika. Lady Barker, who was sent out by BRCS to take charge of the Wounded and Missing Bureau in Cairo, endeavoured as far as possible to answer the few inquiries for Australians, but this organisation was not generally known in Australia where in Sydney and later in Melbourne, enquiry bureaux had been founded by members of the legal profession in those cities. Gradually similar offices were opened in each of the state capitals in Australia. The Australian Red Cross Society had also been founded in August 1914 by Her Excellency Lady Helen Munro Ferguson as a Branch of the British Red Cross Society, and this organisation soon took the lead in this task, as well as a wide range of others.

The Australian Red Cross commissioners had taken control of the Australian Red Cross operations in Cairo, when in August 1915, 23 year old Miss Vera Deakin of Melbourne cabled asking if there were need for any help. Mr Norman Brooks, one of the Commissioners cabled in reply that there was much work to be done and advised her to come to Egypt, although he made no mention of any definite work.  Miss Deakin enlisted the aid of Miss Winifred F. Johnson, also of Melbourne, and together they left Australia in September 1915 with no idea of what work they were to do. 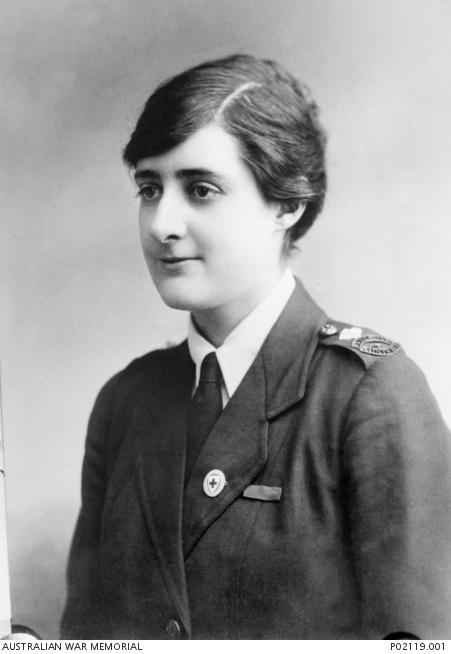 On 21 October 1915, the morning after their arrival in Egypt, the commissioners feeling that the enquiry work was in greatest need of help, introduced them to Lady Barker.  The ARC Wounded and Missing Enquiry Bureau was thus opened in Cairo with Miss Deakin as Secretary and Miss Johnson as Assistant Secretary.  The system of searching already in use by British Red Cross Society was adopted and Lady Barker gave invaluable assistance and advice.

The Bureau moved to London after the Australian Imperial Force was transferred to France in May 1916.  The Bureau re-opened in June at the Australian Red Cross Headquarters in Victoria Street. Employing agents to operate in Britain as well as in France and Belgium, official lists of the wounded and missing were scoured, letters written to men on active service, and where possible, comrades of missing soldiers were interviewed in camps and hospitals. Altogether 400,000 responses were sent back to those who placed enquiries with the Bureau. Where a death apparently occurred, the Red Cross staff tried to remove all doubt. Often letters back to families quoted reports verbatim from researchers; the language used in the reports was often unsanitised, from straight-talking soldiers and the descriptions sometimes quite graphic. Reports from various soldiers could be wildly contradictory or clearly wrong, but they were still passed on so that families would have as much information as possible.  For many families hoping that a loved one was wounded, missing or taken prisoner – somehow alive – the Red Cross reports brought confirmation of a death. 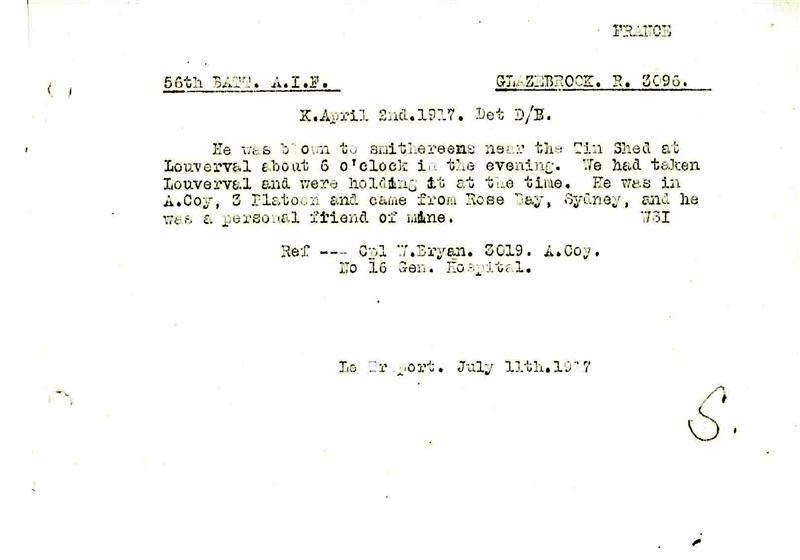 By late 1917 the size of the operation had grown so much that bureau had to move to new premises in Grosvenor Place to accommodate their now sixty-strong staff. After the war ended negotiations then commenced in 1920 with the nascent Australian War Museum, regarding the preservation of the Bureau’s records.  This resulted in the Wounded and Missing Enquiry Bureau records being transferred to the Australian War Memorial in 1921.  Also in 1920 Miss Vera Deakin became Mrs Vera White, after marrying Captain (later Sir) Thomas White (Australian Flying Corps).  Deakin had corresponded with White during his time as a prisoner-of-war in Turkey. After finally meeting in London upon his release, the two returned to Australia and were married in March 1920.

Australia was not the only country to carry out this work but in the Australian case voluminous records have been preserved. In 2002, the files were digitised to preserve the fragile original documents and to provide greater public access via the internet to this valuable and unique information.

These are files raised by the bureau for each individual case where an enquiry was received for a wounded or missing man.  There approximately 32,000 individual files. Included is a record of the date of the original inquiry or the date the man was officially reported missing or wounded or taken prisoner or date located by the bureau.  The files also include, where applicable, a copy of the bureau’s searchers’ report, eye-witness accounts, relatives and/or friends’ letter copies of the bureau’s replies to enquirers and correspondence between the bureau and the wounded or missing man.

The most complete files typically include: 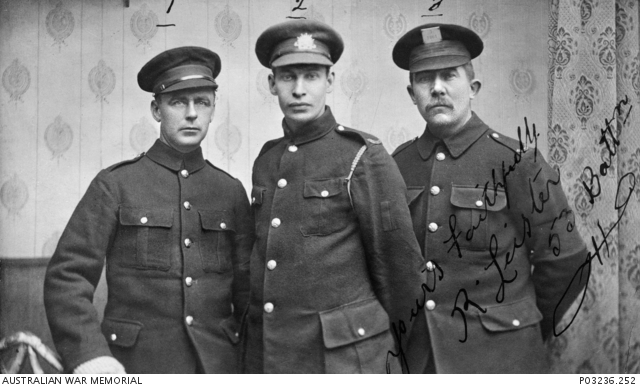 The Prisoner of War Department of the Australian Red Cross Society was established in July 1916 and existed to act on behalf of prisoners of war to trace missing soldiers and to provide information to their families. The Department also provided for the comfort of prisoners in the camps in Germany, Turkey and Holland. Elizabeth Chomley managed this department in London. The Department's records fall into two categories:

The lists of prisoners of war are typed lists of British and Australian prisoners of war in Germany from 16th November 1916 to 27 November 1918. They are in German and appear to be lists forwarded by the German Red Cross Society to the British Red Cross Society, via Geneva, Switzerland. The lists are chronologically arranged within each list. The following details are given for each man:

These lists were the working copy of the Department, often providing the initial notification of imprisonment. The Australians on the list are annotated. There are several carbon copies of each list.

Individual case files of correspondence from 1916 to 1920 relate to the administration of Red Cross parcels and other amenities to prisoners. Included are officers, non commissioned officers, other ranks and merchant marine servicemen. The files on prisoners of war cover the dispatch and acknowledgement of parcels, descriptions of imprisonment and information on repatriation.

Each file could include the following:

The bulk of each file consists of cards which record the content and parcel number and date of dispatch to that prisoner and the acknowledgement card included in the parcel and returned by the prisoner. The postcards also record any special requests for kit, books or supplies from the prisoner. The files often record the eventual fate of each prisoner; escape, repatriation and training on release, or death. They are arranged alphabetically by surname.

From the date of its inception until the armistice the ARCS dispatched 395,695 food parcels and 36,339 clothing parcels. These parcels also included requests or orders when possible. The Department was responsible for ordering the contents of parcels, packing them and administering the distribution and receipt of parcels. In certain cases the distribution of monies or supplies from general donations in Australia and specific donor/prisoner agreements were administered. As the entry of items to enemy territory was censored, the Australian Red Cross eventually had sole control of the distribution of items classified as ‘forbidden articles’. 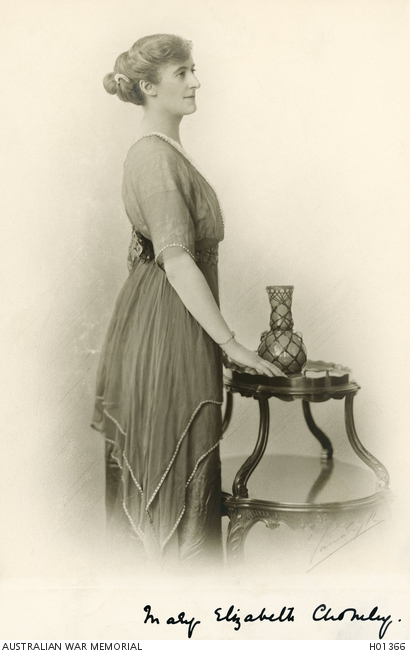 Elizabeth Chomley wrote in her final report that action in aid of prisoners of war had become one of the most important aspects of the work of the Red Cross:

‘When the first Australian prisoners of war were taken by the Germans in July 1916 a separate department of the ARCS was formed to take care of them. Up to that time the only other Australian prisoners of war had been captured by the Turks at Gallipoli and the care of these men had been left to their friends. The dispatch of private parcels was allowed by the War Office until December 1916 when it was decided to control the amount of food and clothing going to Turkey and Germany.’

It was at this time that the ARCS Prisoner of War Department took over the complete charge of Australian servicemen held in captivity.

When the Prisoner of War Department ceased operating, Chomley was directed by the Council of the ARCS to ‘...do all you can to reduce the records to a minimum consistent with their value’. The records that survived this process were transferred to the Australian War Memorial circa 1925.