103 years ago, in June 1917, Private Nain Singh Sailani and Private Sarn Singh were killed in action on the Western Front. These men were among at least 12 Indian Australians who are known to have enlisted in the Australian Imperial Force (AIF) during the First World War. They were also the only Indian soldiers known to have been killed in action while serving as members of the AIF. Other men, such as Desanda Singh, made it through the war and returned to Australia. We may never know what motivated these men to enlist, but their stories add to the richness of Australia’s wartime history.

Private Sarn Singh on the Roll of Honour

The first AIF included people from various ethnicities and backgrounds, despite being raised during the era of the White Australia policy. The Defence Act of 1909 stated that those “not substantially of European origin or descent” were not eligible to enlist, but despite this, people of Asian, Mediterranean, Aboriginal, Torres Strait and Indian descent were among more than 400,000 people who voluntarily enlisted in the AIF.

Australians came into regular contact with Indian troops from British forces throughout the First World War, fighting in close proximity to them on Gallipoli and in the Middle East. Indian troops of any unit were highly thought of by the Australians. In 1915, Private Charlie Beherendt said: “I have been fighting side by side with Kitchener’s army, and the Sikhs and Gurkhas. The Indians fight like tigers and are a great unit to the Empire.”

The bravery of such men was also found within Australia’s own ranks. Private Nain Singh Sailani was born in Shimla, India, and emigrated to Western Australia in 1895 when he was about 22 years old. He settled in Perth where he worked as a general labourer. He was 43 when he enlisted in the AIF in February 1916. He embarked from Fremantle in June that same year on board the troopship Suevic and arrived in England at the end of July. In November, he joined the 44th Battalion on the Western Front. Singh Sailani’s battalion moved to Belgium in late May 1917 where it was involved in working parties around Ploegsteert Wood, carrying out trench repairs and moving supplies, often under dangerous conditions and artillery fire. On 1 June the 44th Battalion sustained 22 casualties during a trench raid on German lines. Among the dead was Private Nain Singh Sailani. He was buried at Strand Military Cemetery in Belgium. 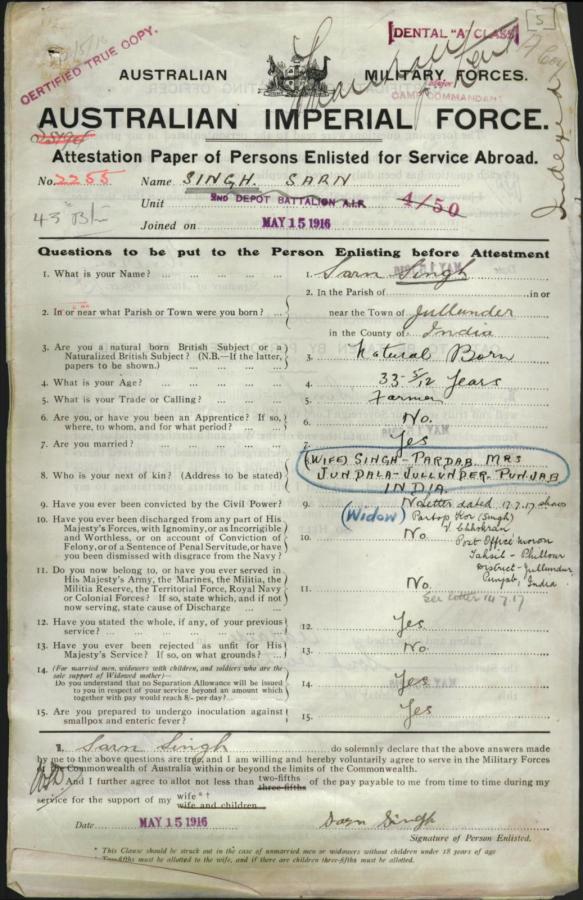 Sarn Singh emigrated to Australia from Jullundur, Punjab and settled near Loxton in South Australia’s Riverland where he worked as a farmer. Singh was about 38 years old when he enlisted in the AIF in May 1916. He embarked from Adelaide in August on board the troopship Ballarat and arrived in England in late September, joining the 43rd Battalion. During his unit’s advance on German positions at Messines Ridge on 10 June 1917 he was killed in action when the enemy unleashed artillery fire onto his position. In Jullundur, his wife faced a future without her husband and provider, writing to Base Records-

“Words fail to express my mournful feelings and my miserable condition… I therefore see no one else except you who may do me any kind of favour for supporting my life as well as saving my virtue… it would have been much better if I might [have] died before my husband did.”

Desanda Singh was a well-known travelling salesman from Kapurthala, Punjab, India who settled near Ceduna in South Australia. Described by newspapers as a “genial Indian hawker” renowned for his gold and blue turban, Desanda Singh was 38 when he enlisted in 1917. He joined the 3rd Light Horse and arrived in Egypt in April 1918. In May he was attached to administrative duties at the company headquarters where he served until August, when he was discharged and sent back to Australia. Singh’s discharge was ambiguously listed on his service record as “by discretion of authorities because of peculiar conditions existing in this theatre”. Singh survived the war and returned to Australia where he continued to live and work in South Australia, trading as a hawker until at least 1946.

Although enlistments of Indian Australians accounted for a small proportion of the AIF, their stories demonstrate the diversity and the changing face of Australia’s military past. We thank them for their service.