Remembering the war in New Guinea

Seventy years ago, in September 1943, Australian and American forces launched a major offensive against the Japanese occupying New Guinea. Tens of thousands of Allied troops participated in a series of operations that recovered great areas of occupied New Guinea and provided the springboard for General Douglas MacArthur’s successful later advance into the Netherlands East Indies and the Philippines. 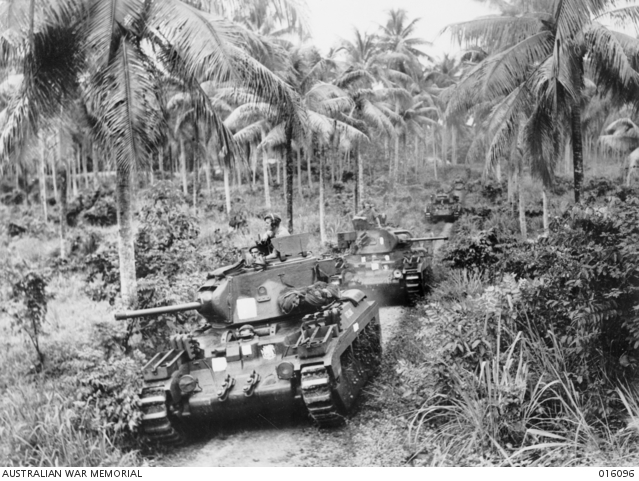 Finschhafen Area, New Guinea, 9 November 1943. Matilda tanks carrying out training manoeuvers preparatory to their use in action against the Japanese strong posts in the Finschhafen Area

Beyond the scale of operations, however, the New Guinea offensive is also significant as it produced the war’s closest and most successful cooperation between Australian diggers and American GIs. Now that defence planers in Australia and the United States are once again focusing on the Pacific, this anniversary is a timely reminder of when Australian and American soldiers served, fought and died together in our region, fighting to liberate what was then Australian territory.

For much of 1943, the ground war in New Guinea was fought in the rugged terrain around Wau and Salamaua. It was a slow, grinding campaign that acted as a magnet, drawing in Japanese troops from nearby Lae. Lae had been an administrative centre for Australia’s Mandated Territory of New Guinea and subsequently became a major Japanese base after its capture in March 1942. The Salamaua magnet worked exceedingly well, substantially weakening the Japanese garrison. 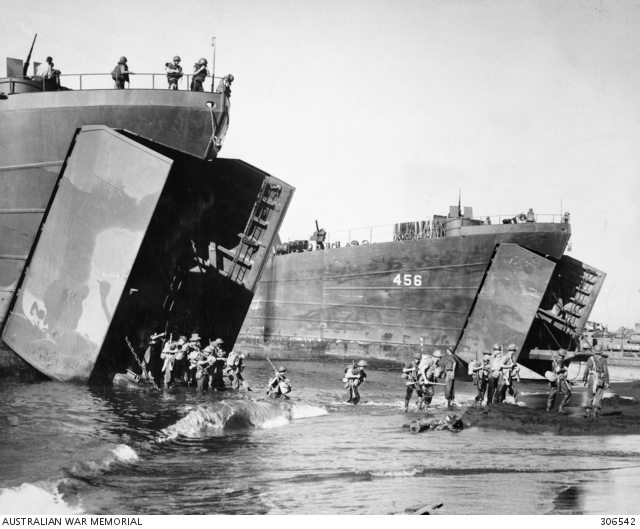 On 4 September 1943, Australian forces made an amphibious landing east of Lae. The next day, Australian troops were dramatically flown in to Nadzab, north-west of Lae. Lae was captured in a giant pincer movement, caught between two Australian forces advancing along the coast from the east, and Australians moving overland from Nadzab. Lae fell on the 16th.

Thereafter, Australian forces fought to clear the Markham–Ramu Valley and the Huon Peninsula. In February 1944, America forces made an amphibious landing near Saidor, linking up with Australian soldiers. As the Japanese fled,  Madang was liberated in April.

Experiences in New Guinea were diverse. Operations were conducted over vast and remote areas. The terrain and climate were tough and exhausting, and were as much an enemy as the Japanese. Large-scale airborne and amphibious landings were features of the offensive, and so were daring small-scale commando raids and ceaseless jungle patrols. Supplies delivered to base areas by sea and air-drops were carried forward by over-burdened New Guinean carriers.

Between March 1943 and April 1944, some 1,200 Australians were killed, and an estimated 35,000 Japanese died. That the Australian fatalities were so comparatively low is a testament to the army’s professionalism and its mastery of jungle warfare, as well as to the strong material advantage the Allies enjoyed over the increasingly desperate Japanese.  The dark days of 1942, when Australian units were deployed piecemeal to Papua with minimal preparation and equipment, were over.

Much is often made of Australia’s close wartime relationship with the United States. It is often falsely assumed that during the Second World War, Australia dumped Britain for America as its preferred great and powerful ally. This is a misleading simplification.

As was demonstrated through Australia’s ongoing contribution to the Empire Air Training Scheme (EATS), for example, Australia remained committed to Britain and the Commonwealth. Brought together by desperate circumstances in 1942, the Australian–American alliance worked exceeding well in 1943; but by late 1944 and 1945 the passion was gone, with Australia marginalised, relegated to “mopping-up” campaigns in the Pacific. This partnership was very much a wartime marriage of convenience.

Australian and American soldiers rarely served together in the front line. Buna in late 1942 is a notable exception. Another, and less known, instance took place on Mount Tambu in the mountains above Salamaua in mid-1943. This closeness is most powerfully illustrated by the actions of the stretcher-bearer Corporal Leslie Allen.

Allen was almost the stereotype of a bronzed ANZAC. Born in Ballarat East, his early years were difficult. After he was abandoned by his parents at the age of 12, he began working as a farm labourer. By the time he enlisted in the army in 1940, the 23-year-old was a tall and powerfully built man who earned the nickname “Bull” for charging through the opposition on the football field. Personally brave, Allen struggled with authority.

In 1943, Allen was awarded a Military Medal for recovering Australian wounded under fire near Wau in February. Five months later, on 30 July, he again repeatedly risked his own life when rescuing at least 12 wounded American soldiers during fighting on Mount Tambu. 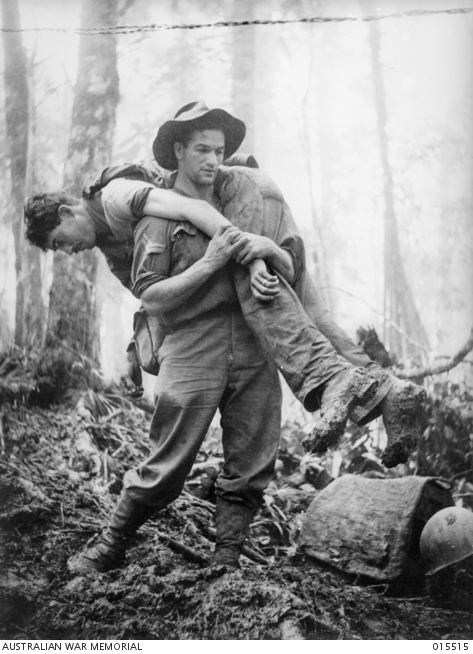 Allen’s selfless bravery was afterwards celebrated in Australian newspapers with headings such as “one of the war’s most gallant stretcher-bearers” and an “Australian ‘Superman’”. A photograph showing Allen carrying a stunned American to safety was first published in newspapers in mid-August, just two weeks after the incident. The photograph is a powerful image of courage and devotion.

Yet Allen was also a man badly affected by his war service. In the Middle East in 1941, he had been hospitalised with “anxiety neurosis” and when he returned to Australia from New Guinea his behaviour became increasing erratic. In February 1944, he struck an officer and was demoted. In September, Allen was discharged from the army suffering “constitutional temperamental instability”, “anxiety symptoms”, and malaria.

So traumatised was this veteran of the Libyan, Syrian and Salamaua campaigns, that Allen retreated to an uncle’s farm and lost the power of speech for a time. In early 1945, he was awarded the United States Silver Star Medal for his services to the Allied cause. Among the many people who expressed their congratulations was Eleanor Roosevelt, wife of President Franklin D. Roosevelt.  In 1949, Allen married Jean Floyd, who had been a nurse during the war. The couple had three sons and named their only daughter Eleanor, after the First Lady.

There have been recent calls for Allen to receive a posthumous additional award. Perhaps the best way to acknowledge his service, however, and that of the many other men and women who served in the islands, is to telling their story, to interpret their actions, and to ask new questions about the significance of their achievements.

People may never become familiar with exotic-sounding locations like Bobdubi Ridge, Komiatum, Finschhafen, Sattelberg, Kaiapit or Shaggy Ridge. But each was a hard-fought battle honour; each was a bitter struggle in the liberation of New Guinea; each was a stepping stone on the long path to the Allied victory that finally came in 1945.