A Revised History of the Menin Gate Lions

Part of the role of the Memorial’s curatorial team is to research items in the collection, and if need be, to update our records when new information becomes available. This article highlights new information that has come to light about the Menin Gate Lions.

With assistance and personal research from Dr Dominiek Dendooven of the Flanders Fields Museum in Ypres (or Ieper), this blog looks into the previously little-known origins of the Lions themselves – from their creation around 1822 and placement on either side of a staircase in front of the Ypres Cloth Hall, to their present place at the main entrance of the Australian War Memorial.

For those taking part in the British offensive of 1917, known as the Third Battle of Ypres, the Menin Gate was the point at which they left the town behind and headed toward the battlefield. The Menin Gate holds particular significance for Australia as all five of the Australian infantry divisions on the Western Front spent a significant amount of time in and around the town.

Today the Lions represent the ongoing friendship between Australia and Belgium, and are a reminder of the important role that Australians played in Belgium during the First World War. The Menin Gate today is home to a large monument featuring the names of the 55,000 allied soldiers who remain missing in France and Belgium, 6,000 of whom are Australian.

Before this new research, the Memorial’s records gave differing dates and origins for the Lions, and their only pre-war reference was stated incorrectly that they were created during the reign of Louis XIV (1638-1715) when the Menin Gate itself was first ‘modernised.’

The biggest hurdle in finding the origins of the Lions has been that many of the city’s records were destroyed during the First World War. It was interest in this lack of information that led me to contact Dr Dendooven. From old prints, Dr Dendooven was able to show that the Lions were once situated on the staircase leading to Ypres Cloth Hall, which functioned much like a town hall. The earliest known image of the Lions is an engraving by English artist John Coney (1786–1833), dating from around 1829: 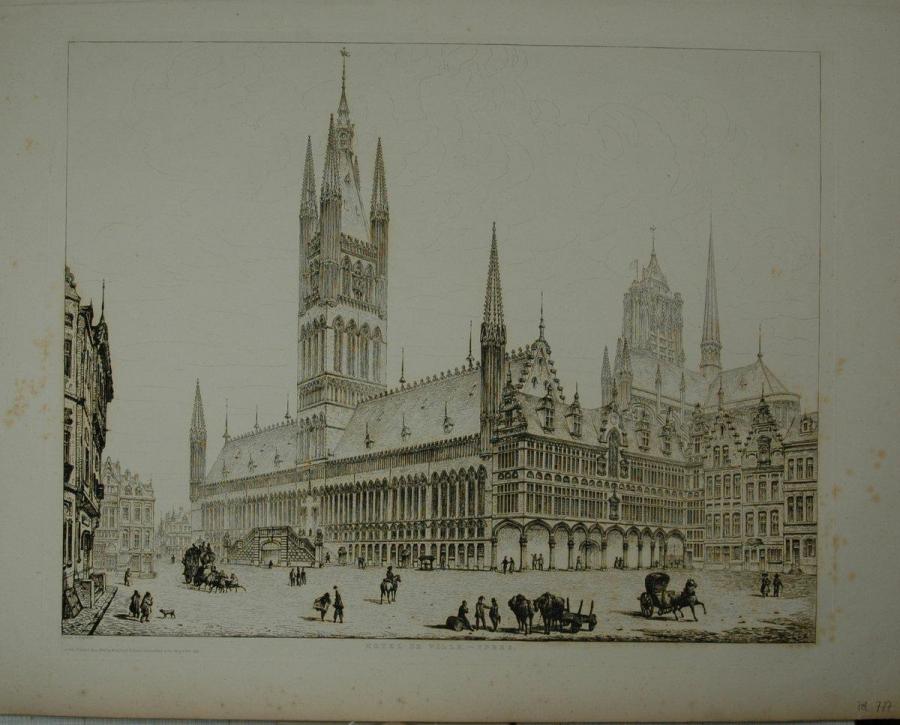 John Coney, Ypres Cloth Hall from Engravings of Ancient Cathedrals, Hotels de Ville, and other Public Buildings of Celebrity in France, Holland, Germany, and Italy, Drawn on the Spot and Engraved by John Coney, 1832 (London: Moon, Boys, and Graves); with a detail of the image.

Dr Dendooven identified a book in the Ypres town archives by historian Jan Dewilde, Restauratie van de Ierperse schepenkamer 1861–1869, on the restoration of the Cloth Hall. This book cites an original manuscript by Jan-Jacques Lambin, written between 1800 and 1833, which records that the staircase was completed on 2 June 1822. It also records that the lions were sculpted by a mason called Dubois, from the nearby town of Soignies. Unfortunately the name Dubois is very common in this area, so any further identification, including a first name, becomes impossible.

The Cloth Hall was built in the 13th century. It was regarded as one of the largest and most beautiful gothic-style civic buildings in Europe until the First World War, when it was almost completely destroyed by shelling. In the early 17th century, a new staircase had been built to replace the medieval original; but by the start of the 19th century, this new staircase had fallen into disrepair. It was decided that a third iteration of the staircase should be remodelled in the then-fashionable Neo-Classical style. This task was completed in 1822 by local architect Louis Roelandt. On either side of that staircase was a carved stone lion – today known as the Menin Gate Lions.

The Lions are made of calcareous bluestone (sometimes also called ‘little granite’), a blue-grey stone from the provinces of Hainaut, Namur and Liège in Belgium. The stone comes from fossilised marine organisms and is quarried exclusively in Belgium. The stone used for the Lions was quarried at Soignies, where industrial extraction of the stone began in 1668 when the Wincqz family established a small mine there.

Less than 20 years later, in the 1840s, it was decided that the Cloth Hall should again be remodelled, but this time to reflect its original medieval construction. This led to the demolition of the Neo-Classical staircase in 1848. Between 1848 and 1862, the Lions disappeared from the public eye and cannot be found in any records; parts of the staircase were recycled to build a pathway just beyond the city walls in a nearby forest. In 1862 the Lions reappeared atop two plinths in front of the newly remodelled Menin Gate, which guarded the city’s entryway from the road leading to the small town on Menin.

The lions sat on the plinths on either side of the Menin Gate – until some point between June 1915 and the Australian entry into Ypres on 20 September 1917. By then the Lions were no longer on their plinths: they do not feature in photos of the area taken on that day or afterwards.

Below are two images taken from similar viewpoints. In both the tower from the Cloth Hall can be seen in the background: 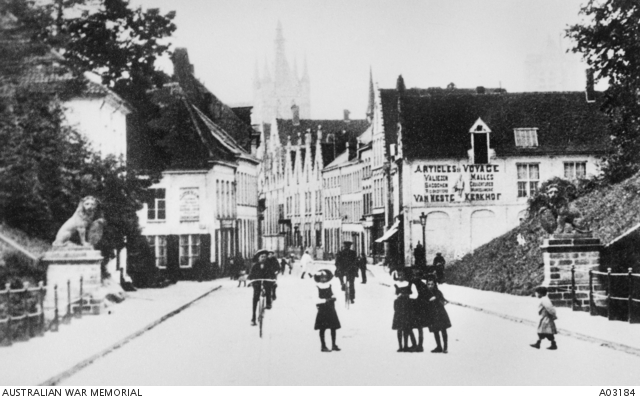 A Street In Ypres showing the two carved lions at the Menin Gate entrance, c. 1910, photograph. Attributed to Antony D’Ypre 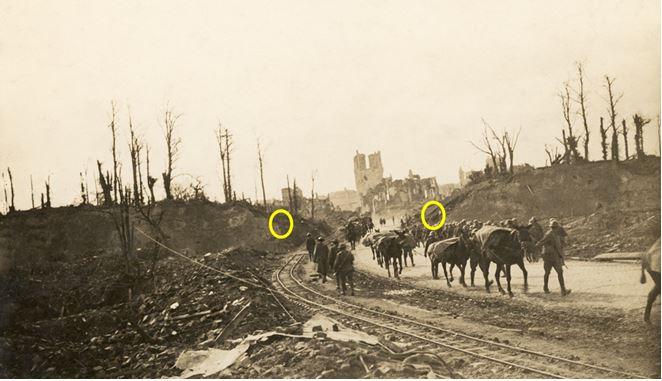 A group of German soldiers at Hellfire Corner, taken prisoner by Australian troops earlier that day, making their way out of the Menin Gate [with approximate previous locations of the Lions in yellow], 20 September 1917, photograph. Unknown photographer AWM P09435.010

This latter photo, taken on the day Australian soldiers entered Ypres, depicts German prisoners marching out of Ypres, with the notable absence of the Lions.

The first post-War record of the Lions’ whereabouts came in 1920, when one of the Lions was placed in front of the ruins of the cloth house. Victims of the destruction in Ypres during the war, the right-hand Lion remained largely intact, losing only its front right leg, however the left-hand lion sustained so much damage that all that remained was a head and trunk ending just below the ribcage.

Below is an image of the more intact of the two Lions; there is no sign of the other Lion: 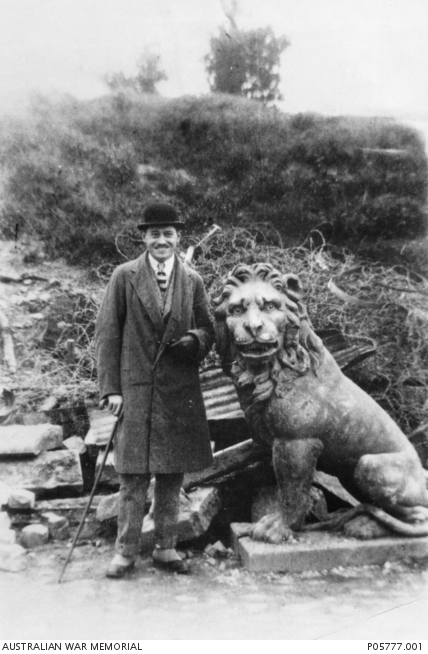 An unidentified man stands beside one of the two Lions, 1920, photograph. Photograph: C.H. Webster

In 1936 Australian Prime Minister Bruce made a request to the mayor of Ypres for the Lions to be presented to Australia as a gift. This request was granted by the Ypres City Council on 8 June, and soon after the Lions were crated up and shipped to Canberra. It is likely that Bruce, in his role as Australian High Commissioner to the United Kingdom, had first seen the Lions himself on a visit to the city in 1923. This may have led to his request 13 years later. In return, a bronze casting of Charles Webb Gilbert’s sculpture The Digger (ART12591) was presented to the city of Ypres in 1938.

When the Lions arrived at the Australian War Memorial in September 1936, the building was not yet complete and lacked a suitable space to display them properly.

At the opening of the Australian War Memorial on 11 November 1941, the right-hand Lion was displayed next to Will Longstaff’s Menin Gate at Midnight. The more damaged Lion remained in storage until it was decided that the Lions should be restored in the mid-1980s. During 1987 and 1988, Polish-Australian sculptor Lucas Zywuszko was commissioned to restore the Lions, leaving only the minor shrapnel damage without repair. Zywuszko’s restoration work can be seen only on close inspection; but to the many people who pass the sculptures every day at the Memorial’s front entrance, the restoration goes largely undetected.

In 1991, the Lions were put on display in the Memorial’s entryway, where they remained until September 2014, when they were loaned to the Canadian War Museum in Ottawa until their return in mid-2015. The Lions also returned to their original home in Ypres between April and November 2017 to coincide with the centenary of the battles of Passchendaele. It was during this latter trip that the Australian government presented the city of Ypres with exact replicas of the Lions, which today sit either side of the Menin Gate. These replicas were created by the Monument Vandekerckhove company, who used 3D scans of the originals to cut the lions out of stone with a 3D milling machine. 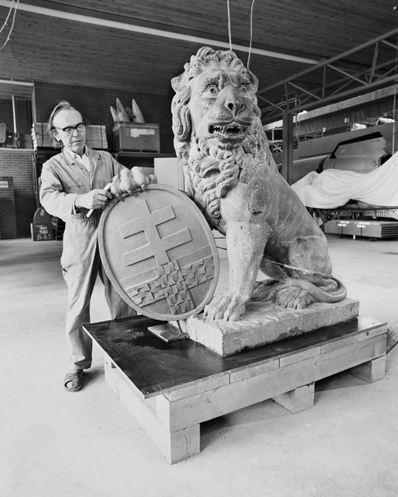 Today the original Lions greet visitors to the Memorial at its main entrance, just as they once did to visitors entering the city of Ypres by the Menin Gate.

A link to Dr Dendooven’s research on the Lions, from which much of this new information was initially drawn, can be accessed here.