'Everyone who survived that day was lucky'

The Australian War Memorial has worked with veterans and their advocates to commission a work of art to recognise and commemorate the suffering caused by war and military service. The art work represents those affected by operations and during training; in war and on peacetime service.
Learn more. 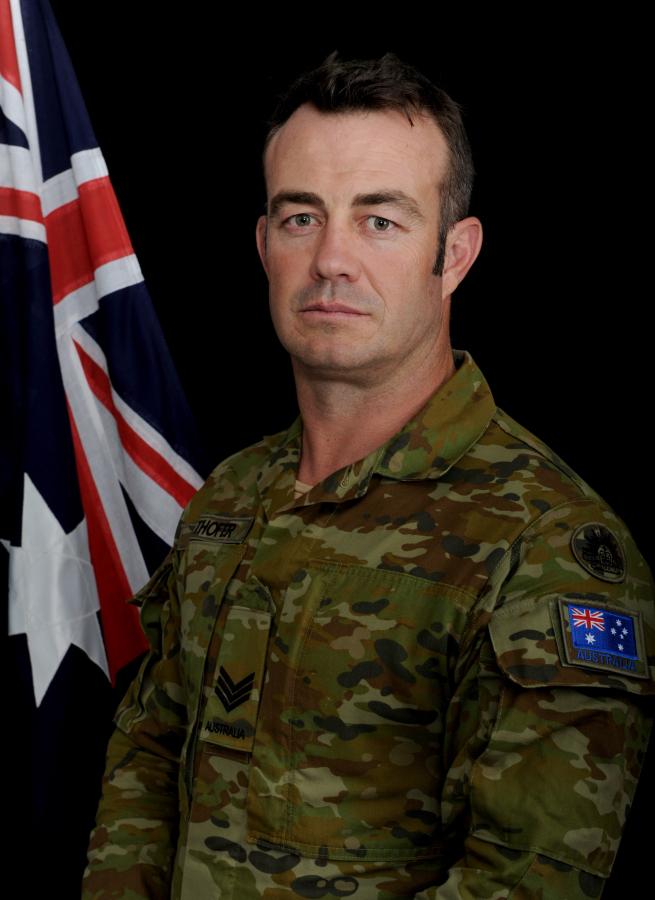 Sergeant Robert Althofer had returned from picket and was still in his body armour when he heard the gunfire.

“I just thought they were shooting into the air,” he said. “And then I got hit.”

It was 29 October 2011, and Robert was at Patrol Base Sorkh Bed in Afghanistan’s Kandahar province when, without warning, an Afghan soldier calmly fired his assault rifle at a group of Australian soldiers who had been tasked with mentoring the Afghan National Army.

“There were roughly 350 Afghan soldiers on parade, and I got there right at the end,” he said.

“He was only approximately ten metres away when he lifted up his weapon, and started firing at us.

“My interpreter, who was right next to me, was shot as well and we immediately tried to give first aid.”

At first, Robert didn’t realise that he’d been shot.

“The first rounds went off, and I was standing behind my 2IC, so I didn’t see him firing at us,” he said.

“The second burst of fire is when I fell to the ground.

“I didn’t know I had been shot at that stage, but I fell to the ground, and I looked up and that’s when I saw him with his weapon pointed towards me.

“For some reason, I thought my hand over my face would protect me, so I ducked away, and the rounds landed near my face.” 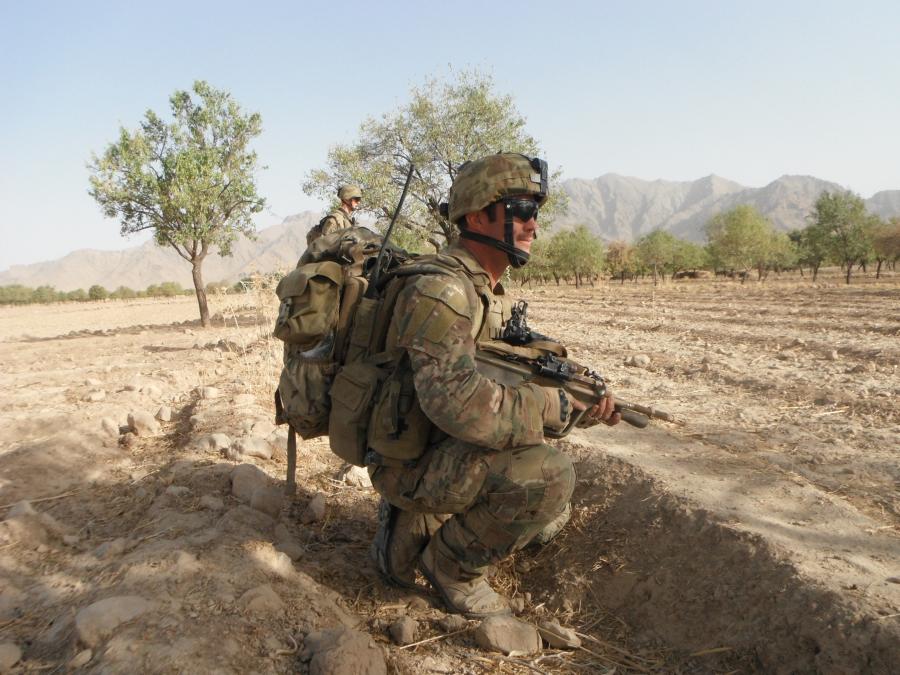 The rogue soldier was shot dead as Australian soldiers raced from a nearby compound and began treating the wounded.

“Our medic had been shot in the knee, and he was crawling around, trying to triage everyone who had been shot,” Robert said.

“The hierarchy of the whole company was essentially on parade that morning and had been shot up.

“So the other, younger diggers came running out.

“By this stage, I’d realised something was wrong because I couldn’t stand up.

“A young digger [then] started working on me, and he put both hands into the right side of my leg where the exit wound was.”

Robert was rushed to a small Afghan National Army hospital facility at the base, before being airlifted to Tarin Kowt.

“We knew by this stage that choppers were inbound to casevac us out of the area, so I got put on a litter,” he said.

“I was starting to feel the pain because they’d put two tourniquets around the leg, pretty high up.

“But I was directly opposite Luke Gavin, so that was pretty painful too. I was his section commander, and I’d been his platoon sergeant on two other operations, and had done two previous tours of East Timor with him, so I knew him really well.”

Robert was flown from Tarin Kowt to a US military hospital in Germany and then home to Australia.

“The bone in my upper leg was completely shattered, and I was lucky the bullet didn’t hit an artery,” he said.

“The first four days I was in and out of surgery, and when I got on the plane, I was still in a bad way.

“I had to get a couple of blood transfusions just to fly back to Australia, and when I got home, I couldn’t bend the leg at all.

“The first couple of months were just constant surgeries and there was a machine which forces your leg to bend. I was literally just pressing a button and forcing the leg to bend until I was pretty well in tears and I couldn’t take it anymore.

“But I was lucky.

“I was in rehab with this other guy who had been blown up by an IED. This guy was really struggling just to stand up and move around; and that’s what makes you put things into perspective. 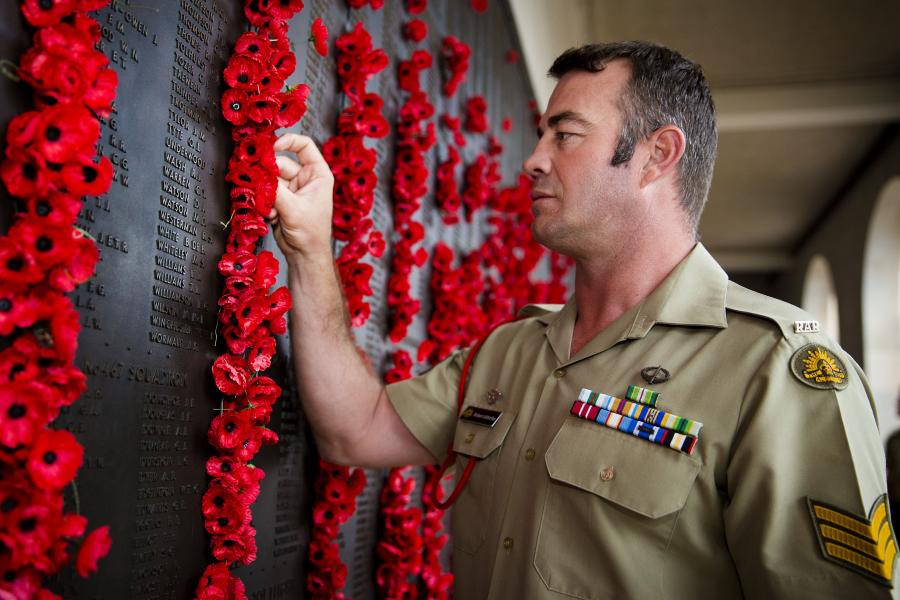 A sergeant in the 2nd Battalion, Royal Australian Regiment (2 RAR), Robert had grown up in Wellington in New South Wales, and enlisted in the Australian Army in 1994.

“I was halfway through Year 12, and it was something I always wanted to do,” he said.

“Both my mum and dad had been in the navy, and my brother was in the army, serving in Townsville.

“I wanted an adventure, and to experience a bit of life, so I joined when I was 17.”

He deployed to East Timor four times, to Solomon Islands, and to Afghanistan in 2011 with Mentoring Task Force Three as part of Operation Slipper.

He knows he cheated death in Afghanistan and hopes that sharing his story will help others.

He took part in the Soldiers-in-Residence program at the Australian War Memorial and walked the Kokoda track to raise money for Mates4Mates, a not for profit charity which supports current and former Defence Force members.

Robert also features in the artwork, Green on Blue: The Betrayal of Trust, by his friend, artist and veteran Rob Douma.

Douma’s work, which was created in response to the ‘Green on Blue’ attack at Sorkh Bed, won the Memorial’s inaugural Napier Waller Art Prize in 2018 and is now part of the National Collection.

“When Rob Douma approached me with his idea to bring to life this incident, my first thought was why would you want to tell my story? There are so many others whose story should be told before mine. But my family helped me to realise its more than that, it's about never forgetting our mates and fellow soldiers who sadly passed away that day,” Robert said.

“So, to me, what Rob has done, what he has imagined and created on paper, reflects that time in our Australia's Military history where trust was betrayed. To be given the honour by Rob to have this important event placed on a canvas where not just Australian soldiers' lives were lost, but also our Afghanistan interpreters, it is a very humbling experience. It is not something I have taken lightly as it is a reflection on what had occurred that day.

“The real heroes [are] the three Australian soldiers who died that day and their families who were left to pick up the pieces.” 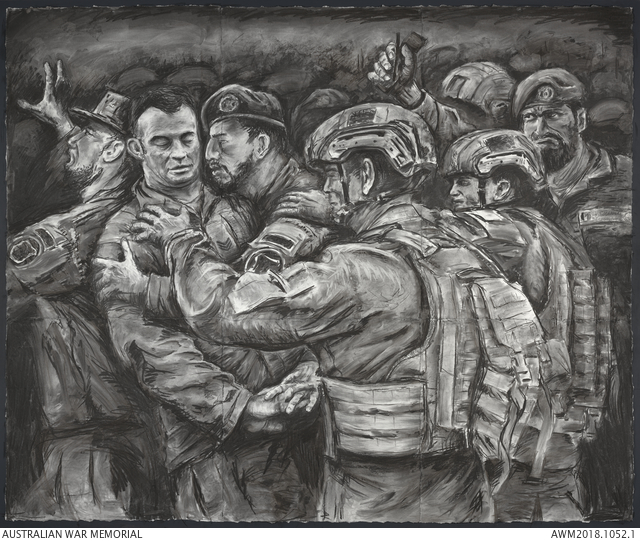 Green on Blue: The betrayal of trust by artist and veteran Rob Douma.

Douma’s work references Caravaggio’s The Taking of Christ to invoke the treachery and complexity of these ‘Green on Blue’ attacks. The chaos of the scene is captured in frenetic, expressive strokes of charcoal on paper – the medium itself becoming a metaphor for the ephemeral nature of life.

“Everyone who survived that day was lucky,” Robert said.

“There are days I don’t want to talk to anyone, but people need to hear this story, and they need to realise those soldiers who were killed gave everything for their country.

“Being a soldier, you feel like you have to be this stoic person …

“You don’t really hear too many stories of soldiers who got injured in Afghanistan, or about their experiences when they come home, but it’s a story that needs to be told.

“People don’t really realise. They just go on with their life, and that’s fair enough, but people need to realise, especially now, the struggles a lot of soldiers are having when they get home.

“Just because the war’s finished doesn’t mean there aren’t guys who are hurting.”

Robert credits his wife and his two children for helping him through.

“My family is everything to me,” he said.

“And as long as I can run around with my kids, then I’m happy.

“If I have to get a walking stick when I’m 60, so be it. I’ll worry about the future when it happens.”

The Australian War Memorial has worked with veterans and their advocates to commission a work of art to recognise and commemorate the suffering caused by war and military service. The sculptural installation, For Every Drop Shed in Anguish, by artist Alex Seton, will provide a place in the Memorial’s Sculpture Garden for visitors to grieve, to reflect on service experiences, and to remember the long-term cost of war and service. A field of sculpted Australian pearl marble droplets, it will be made by the artist over the next two years and installed in the Sculpture Garden in 2023. For more information about the Sufferings of War and Service sculpture, visit here.

Defence All-hours support line – The All-hours Support Line (ASL) is a confidential telephone service for ADF members and their families that is available 24 hours a day, seven days a week by calling 1800 628 036.

Open Arms – Veterans & Families Counselling Service provides free and confidential counselling and support for current and former ADF members and their families. They can be reached 24/7 on 1800 011 046 or visit the Open Arms website for more information.

DVA provides immediate help and treatment for any mental health condition, whether it relates to service or not. If you or someone you know is finding it hard to cope with life, call Open Arms on 1800 011 046 or DVA on 1800 555 254. Further information can be accessed on the DVA website.