This blog post was written by Justin Powell, a post-graduate student from the Australian National University who briefly worked at the Memorial as an intern in our Military Heraldry and Technology section. The Memorial’s collection houses a number of First World War trench signs and notice boards.  Perhaps the most interesting of these signs came from Peronne which was captured by the Australian troops of the 14th and 15th Brigades on 2 September 1918 as part of the 2nd Division’s assault on Mont St. Quentin.

Within days of the capture of Peronne a number of signs with Australian themed names appeared on the streets of Peronne, painted on bits of old ammunition boxes.  These included Wallaby Lane, Wombat Road, Ding Bat Alley, Digger Road, Dinkum Alley but perhaps the most iconic of these was Roo De Kanga.  These names were found to be a sharp contrast to the German sign post which they replaced such as "Hohenzollern Street," and "Tirpitz Avenue.”

Roo De Kanga is a classic example of the Australian sense of humour, transforming the word Kangaroo into a French sounding street name (as the word 'street' in French is 'rue')The sign was photographed on  3 October 1918 and was likely collected Australian War Records Section (AWRS) shortly after.  Roo De Kanga was recorded as having been collected in October and had reached the AWRS depot on 2 November 1918, exactly two months after the town had been liberated by the AIF. 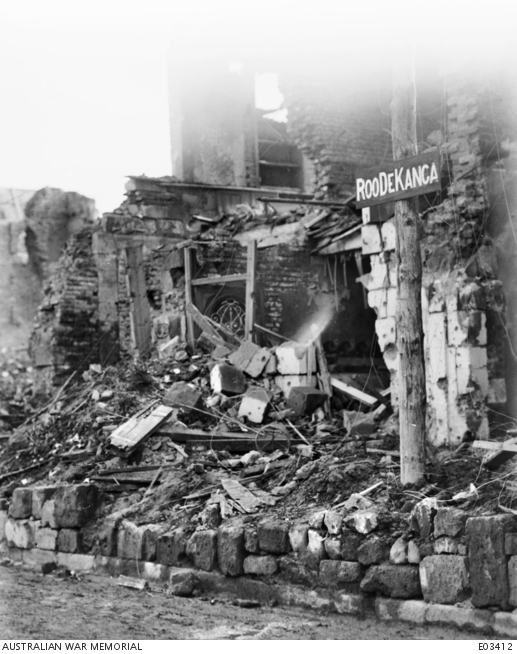 A sign which reads 'Roo de Kanga', a characteristic example of Australian street nomenclature, in Peronne, a month after its capture by the Australian troops. 3 October 1918.

In May of 1919, Sir John Monash toured the battlefields of France and Belgium with his daughter, Bertha.  Bertha recalled seeing a sign that read ‘Roo De Kanga’ in her diary.  However, given the fact that the sign currently on display in the Memorial’s Western Front Gallery had been collected in October 1918, it can be assumed that this was a replacement. Few towns in France, with the exception of Villers Breonneux, have retained the street names afforded to them by the A.I.F.  However, in 1997 the commune of Peronne restored the name Roo De Kanga to a stretch of the rue de St Savour, by the Hotel de Ville, where the sign had hung briefly some seventy nine years before.