Back in 1990 as I was flying back to Australia after a month in England I noticed the flight path took the plane over the Middle East.  I didn’t think much of it at the time, as the Earth usually does from 20,000 feet, the area looked serene.  Little did I know that in less than two weeks this serenity would be broken on 2 August 1990 when Saddam Hussein’s armies rolled into Kuwait and started what was to become the First Gulf War 1990-1991. 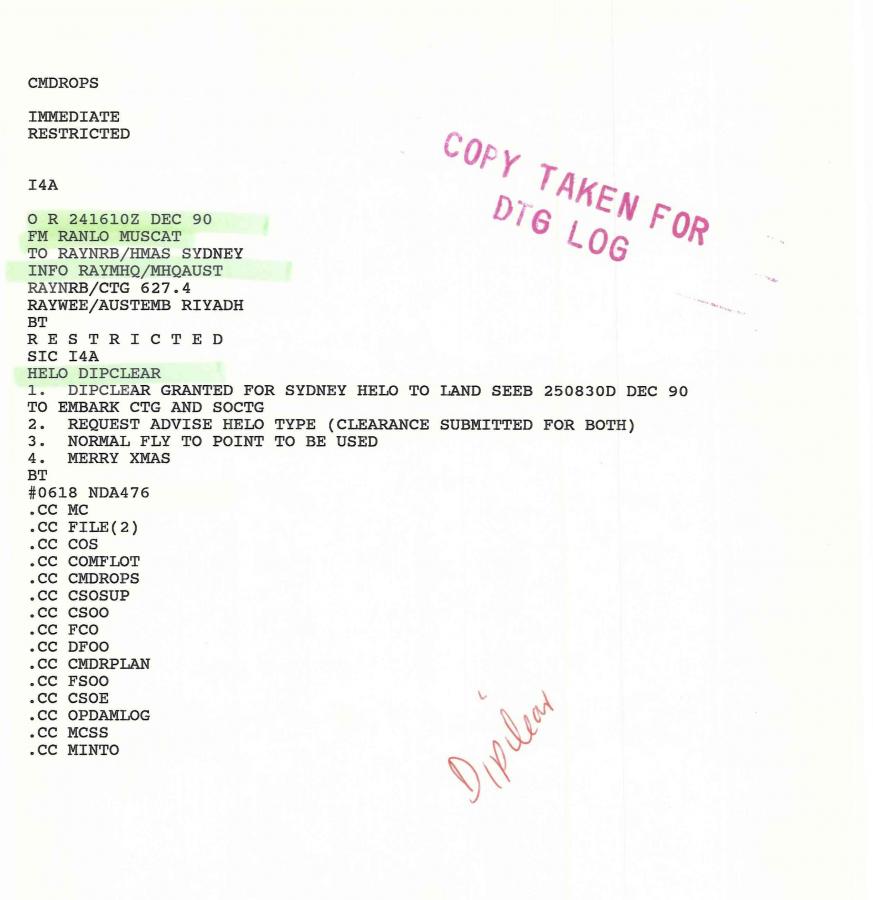 In an otherwise comparatively peaceful 1990 we were all soon to learn of some new conflict concepts, such as “Smart Bomb”, “Scuds” and the first “live War”, brought to us by 24 hour CNN coverage.  Meanwhile, following near global outrage at the invasion, an American led effort in the UN resulted in a series of sanction.  United Nations Resolution 665 called on UN members to contribute naval forces to assist in implementing the trade sanctions.  To this end, Australia contributed a Naval Task Group of 3 ships including Liaison Officers and Logistics support as part of Operation Damask.

By the end of the conflict six Australian vessels has served in the multi-national naval force. These included the replenishment ship HMAS Success, which, having no air defences of its own, relied on the army’s 16th Air Defence Regiment. HMAS Success was later relieved by the replenishment tanker HMAS Westralia. The four warships which were deployed were the Guided Missile Frigates HMAS Sydney (IV), HMAS Adelaide and HMAS Darwin, and the Guided Missile Destroyer HMAS Brisbane. A Royal Australian Navy (RAN) Clearance Diving Team “CDT3” was also deployed.  These RAN units were coordinated out of Maritime Headquarters (MHQ) which was located in garden Island, Sydney.

The Australian War Memorial (AWM) has received from the Navy’s SeaPower Centre the records generated by MHQ during this period; and these records now form series AWM 386.  In a first, these records include complete sets of signal logs, which in previous conflicts had usually been destroyed.  Included are logs on communications and intelligence, logistics, personnel, boardings, media relations, operations; including operational summaries, urgent defects, situation reports and duty commander’s logs.  From this series of signal logs it is possible to build up a comprehensive image of what was occurring in the Persian Gulf at that time.

The records included in the series can be viewed via RecordSearch and then using “AWM386” as the series number. Although this is the National Archives search portal the records are located at the Australian War Memorial and any requests to view them will need to be made to the Memorial’s Reading Room (see below).

Records from previous conflicts have usually only been available after 30 years. However due to changes in the Archives Act this availability is transitioning to 20 years, in 2016 it will be 25 years. Therefore on 1 January 2016 the government records from 1990-1991 became available to be requested. This conveniently places all of the records for the First Gulf War into the “Open period” in 2016.

As the records may still contain sensitive material an access request will need to be placed with the AWM Reading Room before they can be viewed. Because it may take some time (from days to months) to process these access requests it is best to contact the Reading Room staff prior to coming in to the Memorial.