'It’s the dreadful moments … the terrible moments that you remember' 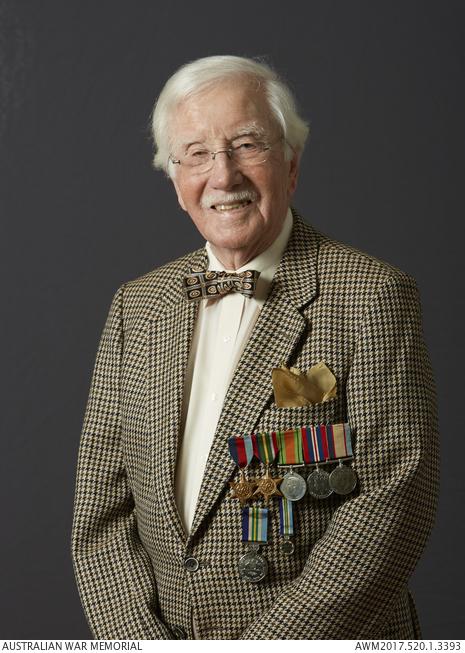 Don Collins doesn’t like to talk about the war. A sergeant with the Second New Guinea Infantry Battalion, he was wounded in New Guinea and lost two of his mates within days of one another.

“I got a bit of shrapnel from a grenade,” he said.  “The head piece came into my arm here, but that was nothing … A lot of fellows went through a lot worse than I did...

“[You were] frightened to death; but one compelling thing you knew, you knew you didn’t want to be buried in that place.” 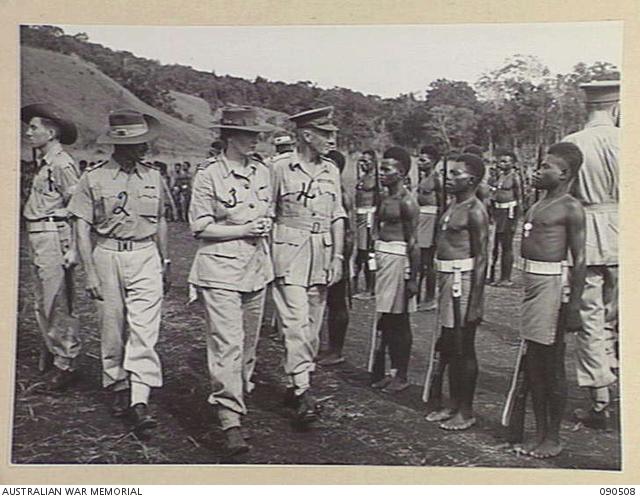 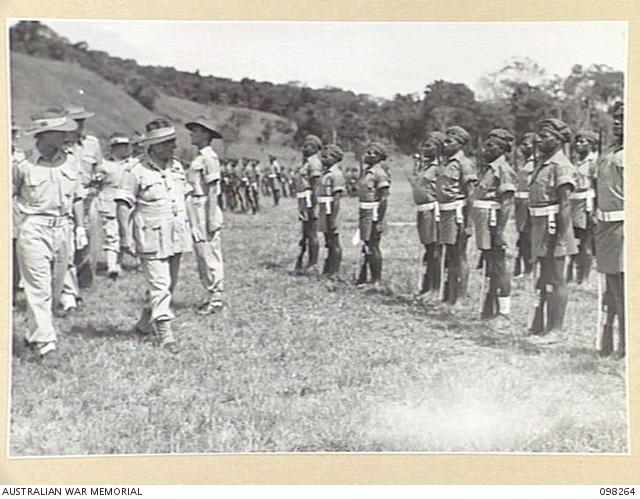 Born in Melbourne in March 1923, Matthew Donovan Collins was studying commerce at the University of Melbourne when he signed up in 1941.

“I had just turned 18,” he said. “I went off to university and at the end of that academic year, there was compulsory military training.

“We were at war with Germany, and my brother, John Collins, was overseas in the 2/11th Army Field Regiment. He would have been 21 or 22, and he was a sergeant in the artillery. He was in the Middle East in Syria and then went to New Guinea and Bougainville …

“We [students] had to do compulsory military training, and the date that we had to go up to Bonegilla in New South Wales happened to be 7 December 1941; the date of the Japanese attack on Pearl Harbour.

“We had assembled on the platform at Spencer Street [Station], and by the time we got to Bonegilla we were at war with Japan as well, and then all of us – all of us students – were in the army.” 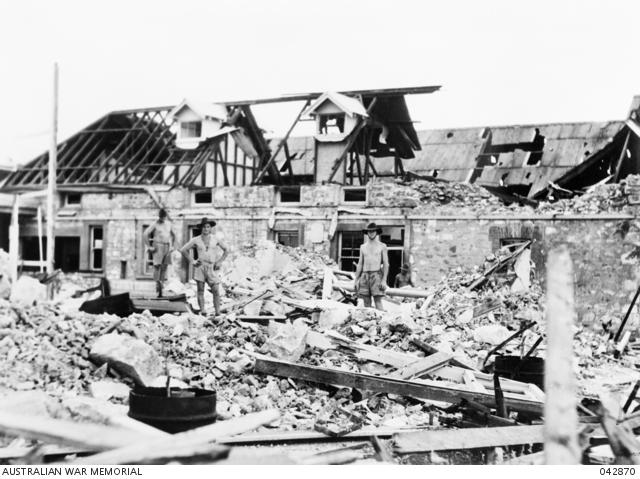 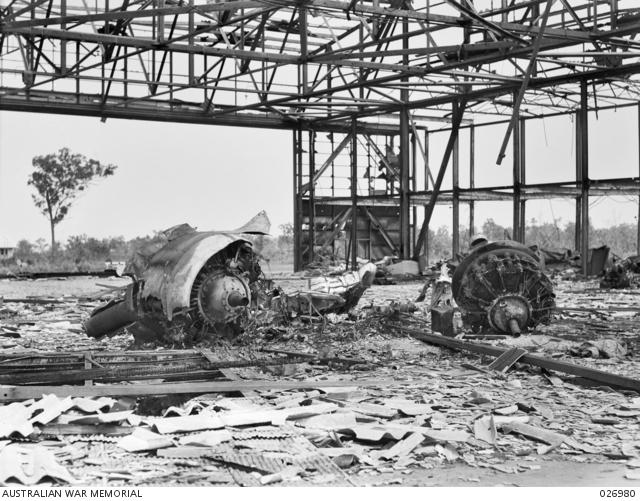 Darwin, October 1942. Part of the engines was all that was left of two Wirraway planes in a hangar at the Darwin Aerodrom after the Japanese bombed the area in February 1942.

Don was sent to Darwin, and was there for most of the Japanese air raids.

“It was only a small town, and all of the civilians had gone south,” he said. “The Japs used to come over on a Sunday – I think they didn’t like us going to church, or something like that – and I spent the first six months digging slit trenches.”

Don was then sent to New Guinea where he served as a lance sergeant with the 2nd New Guinea Infantry Battalion. The battalion, which was formed in New Guinea in 1944 to augment Australian troops fighting against the Japanese, was primarily made up of Papuan soldiers, who served under the command of Australian officers and NCOs.

“We trained at Nadzab,” Don said. “And eventually one day I saw General Blamey walking through our lines. I knew then that something was going to happen, and it happened very shortly afterwards.

“We were sent into action up in the highlands behind Aitape and Wewak, and we were fairly successful as a battalion.

“The natives were extraordinarily good in patrols … We’d fed them up with rice and meat, and trained them, and they came out pretty good soldiers. 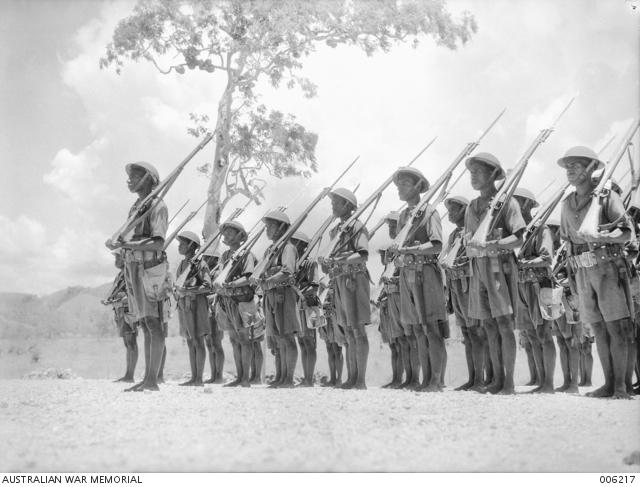 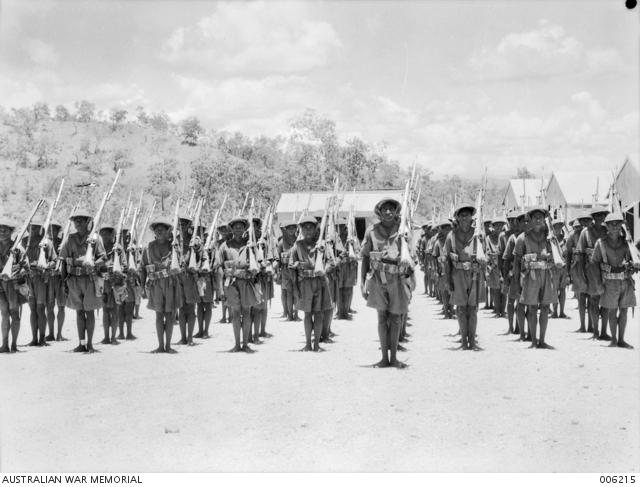 “In training, at Nadzab, [the conditions] were excellent. We were next to the 247th American General Hospital, and we were able to have first class food, but when you were in action, you were on bully beef, and you had to make the best of it, wherever you were.

“You slept in your boots; and that was it; you got used to it.

“You were there and that was it; I think you get inured, and you just take it as part of life.”

He remembers planning an attack one night with one of his superior officers.

“The Japs would have only been about four or five hundred yards away,” he said. 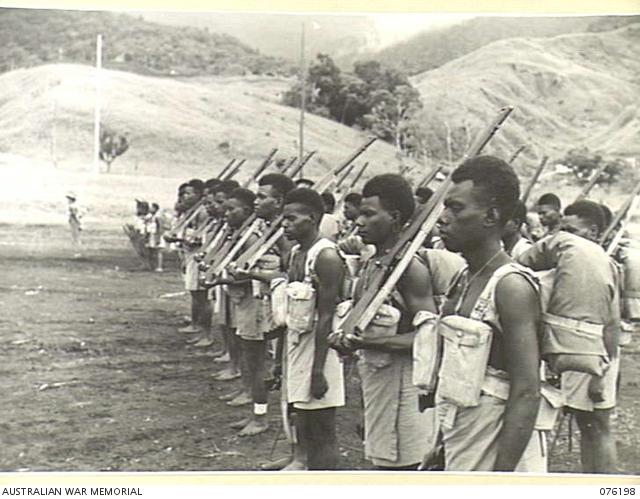 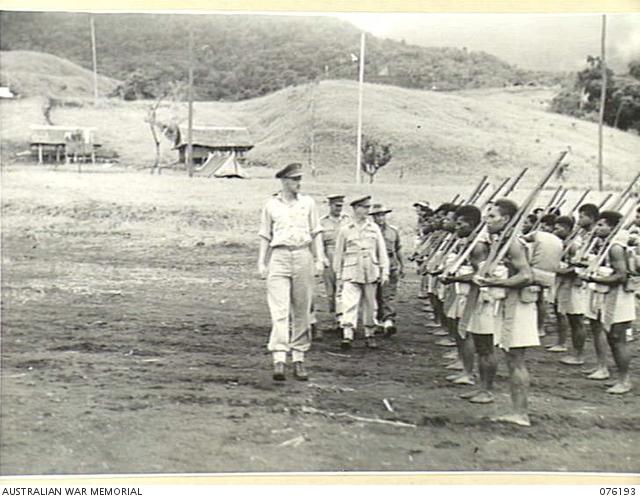 “When that morning came, we blackened all of our faces so that we looked like the natives ...

“Another fellow, another lieutenant and I, went round the back of this hill.

“His name was Dave Hatfield, and we waited together as the Japs came in, but nothing happened, and we went back.

“All we saw was Harris being carried in; he had got it right in the face, and one of our natives, a sergeant major, claimed that he saw the spirit of Lieutenant Harris walking through the lines that night.

“It’s the dreadful moments … the terrible moments that you remember.” 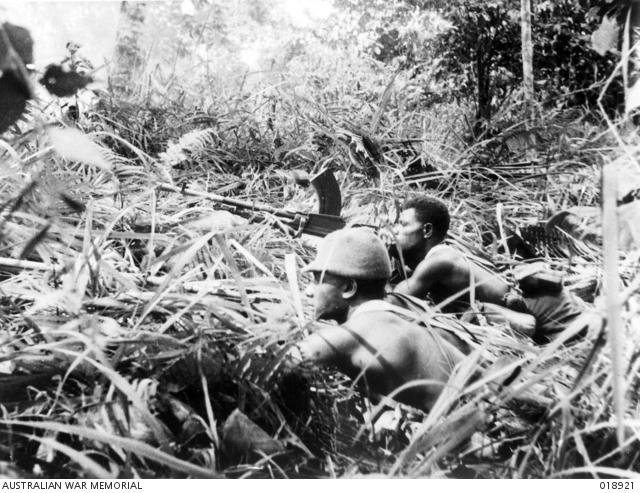 A few days later, he lost another mate.

“We were sitting there, and Watson, a lieutenant said, ‘I think I’ll go out and take my patrol out, and see if I can find some Japs.’

“About two hours went by and I was sitting there and I saw two natives; they were carrying a pole and Watson was tied to the pole. That was the only way they could bring him back.

“He was dead. He wore berets and I took off his beret, and it had a little hole in it and that was all; that was all [it took]. 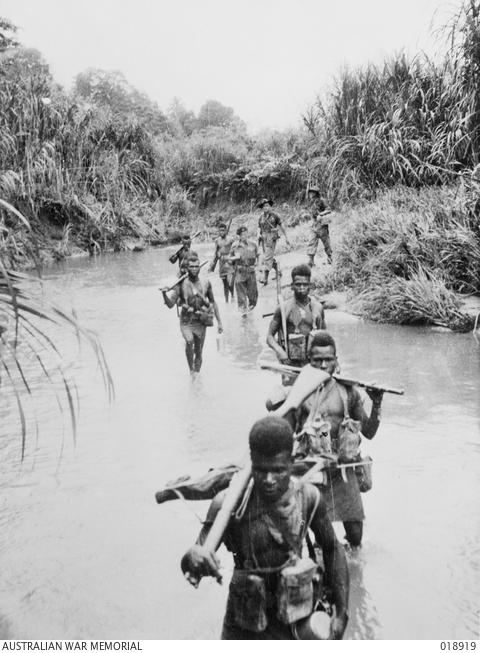 New Guinea, July 1945. Troops of the New Guinea Infantry Battalion wade through a stream on their way to attack a Japanese position. 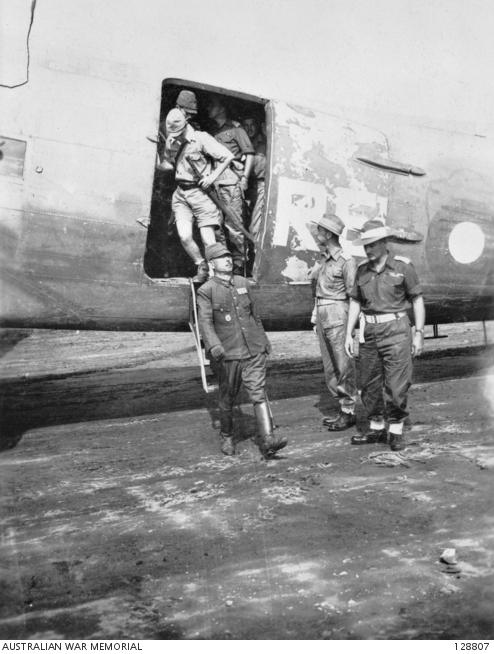 Wewak, New Guinea, 13 September 1945. Lieutenant General Hatazo Adachi, Commander of the Japanese 18th Army in New Guinea, arrives for the surrender ceremony. At 10am on the same day, at Cape Wom, he signed the surrender document and handed over his sword to Major General H.C.H Robertson.

He remembers the day Lieutenant General Hatazo Adachi, the Commander of the 18th Japanese Army in New Guinea, officially surrendered.

“Eventually one of our patrols went in and got General Adachi and brought him out,” he said.

“We put him on a plane, and flew him down to an airstrip near Wewak.

“Australian soldiers were lined up all along this airstrip, and it was magnificent.

“Adachi handed over his sword to our general in charge of the 6th Division, a fellow we called Red Robbie.

“He was General Sir Horace Robertson, and he accepted the surrender of something like 20,000 Japanese in that area and that was it – that was the finish. 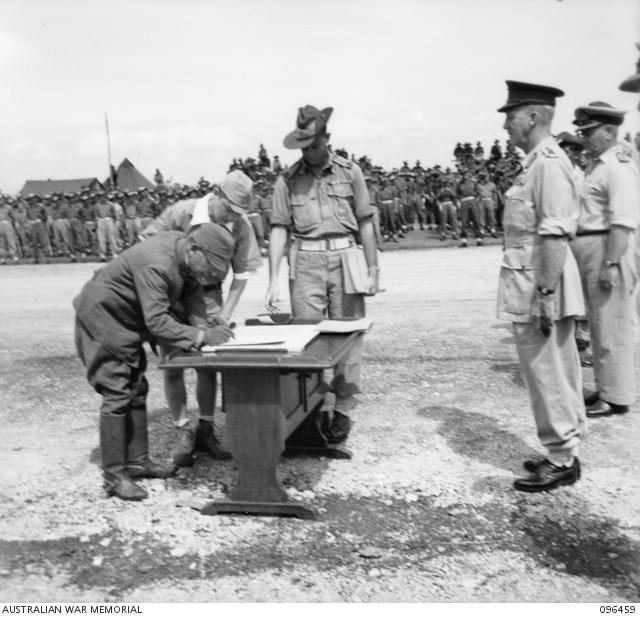 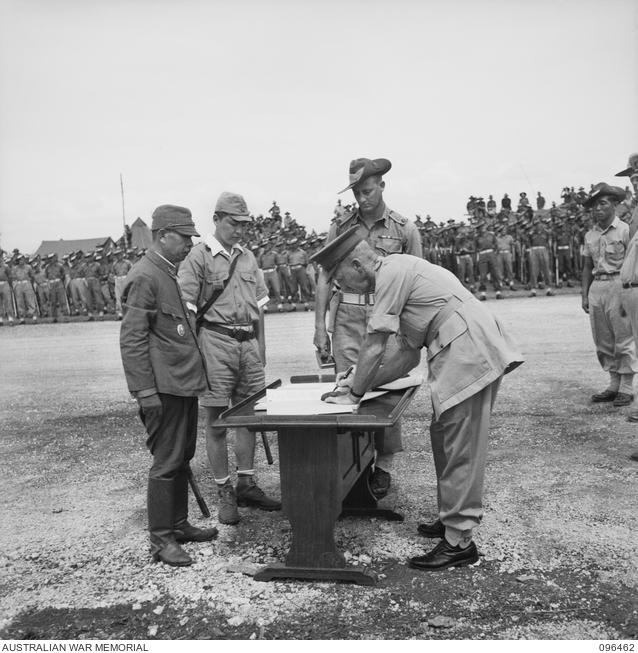 “When the authorities pulled out all the Australian battalions, they left us in there to round up all the Japs and send them back.

“If the Japs were sick, or something like, that we would put them on a plane, but if they were fit, we made them walk out to the coast where they were assembled on an island and eventually taken over to Rabaul and eventually … Japan.

“We were very happy that the bloody war had finished; we had thought that it would go on, and it would have gone on for years, if Douglas Macarthur had had to invade Japan.

“The thing that saved us was the bomb, and that finished it.

“I was up in the mountain area of Aitape and Wewak – the Maprik District, and we went out with machine-guns. We were shooting down all the coconuts, and pineapples, and whatever else was growing, and in those moments of joy, we were thinking, ‘Thank God, it’s finished; it’s finally finished.’” 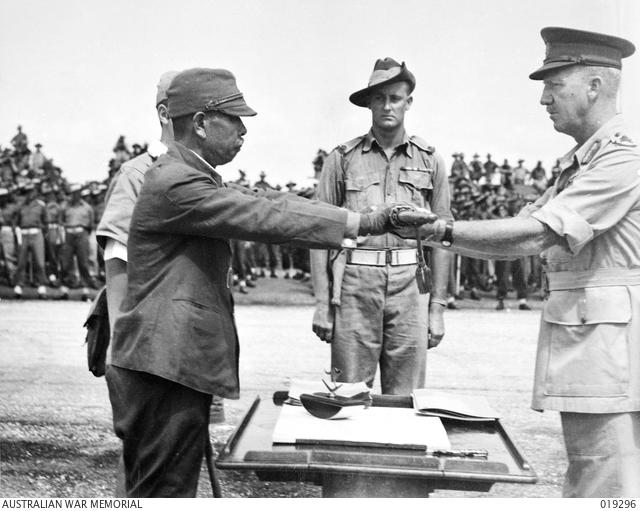 Don felt lucky to have survived, but found he faced another battle when he returned home to Australia in 1946.

“One of our sergeants who I was quite friendly with used to go out on patrol and just sit; he wouldn’t go anywhere, and eventually he was placed under arrest, and sent back, and charged,” he said.

“When I finished, I came into Brisbane by ship, and in a camp there, I happened to run into him. He said to me, ‘I had a wife and a daughter, and I wasn’t going to go stick my nose out there; at least I’m still alive.’ And really I don’t blame him.

“I can remember one fellow got wounded in the buttocks, and he was so pleased that had happened [because] he went home.

“There was great delight at getting back into civilian life, but I think I was all mixed up. I couldn’t go back to university at that stage; I just couldn’t.

“I eventually studied accountancy and became qualified, but then when I was 70, I decided I was going to finish that degree I started when I was a boy, so I went back to university and stuck that out and came out with a Bachelor of Business.” 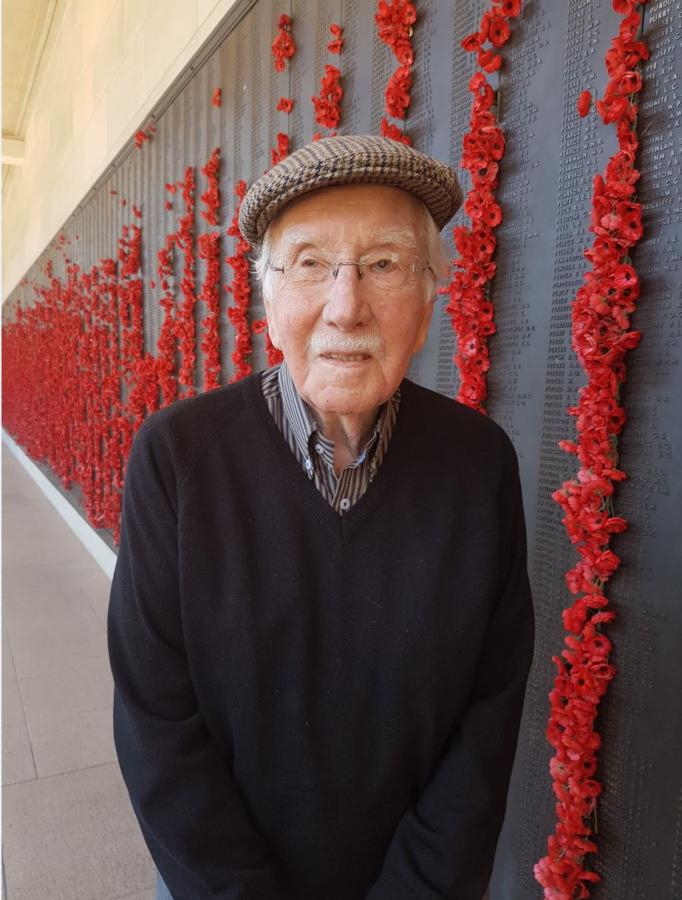 Years later, he visited the Australian War Memorial to pay his respects and remember his mates.

“It’s natural that I would want to come here,” he said.  “I know some of the men [whose names are on the Roll of Honour] …

“Take that fellow Watson, his name’s out there, and my superior officer, a friend of mine, Lieutenant Harris, he’s out there too, and there are others …

“I’ve never talked about this before … but I remember them … and when I see those poppies, I know they are there somewhere...

“War is a terrible thing, and I’m very critical of [people who try] to glorify it.

“There’s nothing glorious about war; it’s terrible and it’s disgusting, and it should not be glorified ...