If you were compiling a list of maritime “firsts”, you might want to include the SS Cumberland: she has the distinction of being the first civilian ship to be lost in Australian waters due to an enemy mine.

The SS Cumberland was a four-masted steamer owned by the British Steam Navigation Company. Early in the First World War, she was being used to transport cargo around Australia and to England. In July 1917 she was heading for England with a cargo of frozen meat, wool bales and Red Cross parcels. In fact about 95 per cent of her cargo consisted of ingots of copper and lead, but this was kept secret at the time due to wartime censorship. 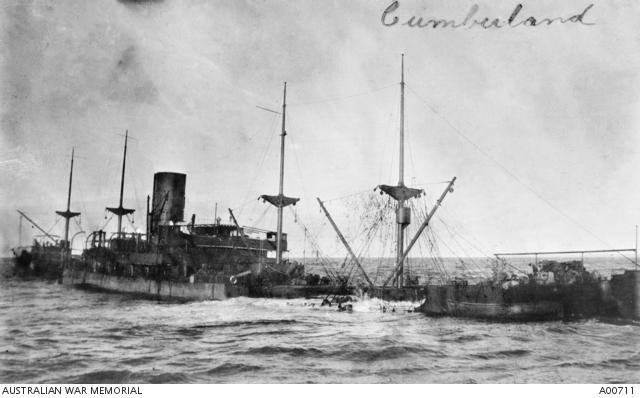 On the morning of the 6th July, the Cumberland was steaming near Gabo Island just off the north eastern coast of Victoria. About 8.40am, two explosions rocked the steamship. The captain and crew thought they had been torpedoed or struck a mine. The explosion blew a hole in Hold No 1. While water poured into the hold and smoke billowed out of it, frozen beef was floating around the ship.

After a request from Garden Island, the Japanese Navy cruiser Chikuma proceeded to the area to provide assistance to the Cumberland. A navy diver from Chikuma reported that the damage was caused by an internal explosion. This report was accepted, despite Australian divers the next day reporting the explosion was external. Two days later newspapers were claiming the Cumberland had been sabotaged. The government allowed the story of sabotage to continue rather than admit there could be a minefield lying ten kilometres off the south coast of Australia.

At the end of September, the Naval Board decided to sweep the area using crews from the recently establish mine sweeping section of the Royal Australian Naval Brigade. Operations commenced on 8 October. The next day, the first mine was discovered. Three days later another mine was found. On 15 October the Minister for the Navy announced that there was a minefield near Gabo Island. 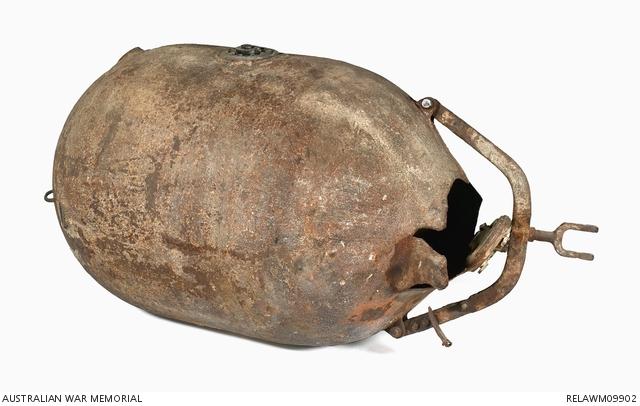 As the sweeping took place, residents in Mallacoota could hear the explosions. But it was not known how the mines got there until 15 January 1918 when the Commander-in-Chief of the Royal Navy’s China Station in Singapore received a message  that a bottle had been found in the sea off Toli Toli, Celebes, by natives. The bottle contained a message from a captured prisoner on the German raider SMS Wolf giving information about the Wolf’s operations and identifying the raider as the former Wachtenfels. It also contained a descriptive drawing of the vessel.

During its fifteen-month voyage, the crew of the Wolf captured or sunk fourteen vessels. As well as a field of fifteen mines near Gabo Island and fifteen mines near Cape Everard, the Wolf laid mines off Cape Town, Bombay and New Zealand. The SS Cumberland was one of thirteen ships which struck mines laid by the Wolf, but the only Australian vessel to become a casualty.

Despite the sweep in October 1917, more mines were found during November and December. The Navy conducted another sweep of the area in September-October 1918. It was not completely successful either, as eleven years later the crew of a fishing trawler received a shock to find a mine in their nets. This is the mine now held in the Memorial’s collection.

The Wolf also laid mines in New Zealand waters around Farewell Spit on the north-west tip of the South Island and near the Three Kings Islands in Cape Reinga. One of these mines was found on a west coast beach as recently as December 2008.

After lying beached at Gabo Island for five weeks, an attempt was made to tow the Cumberland to Twofold Bay. However a rush of water into hold No 1 caused her to become unmanageable and she sank. Fortunately there were no casualties during either the original explosion or the final sinking of the vessel.

In 1938 the Viking Queen hoped to salvage the cargo but was not able to locate the wreck. The salvage vessel Foremost 17 successfully recovered approximately 1825 tons of ingots, which they believed to be 95% of that cargo, in 1951.

The wreck of the Cumberland lies in open water some five miles off the southeast coast of Green Cape, New South Wales, at a depth of over 94 metres. She is now a protected Historic Shipwreck under the provisions of the Commonwealth Historic Shipwrecks Act 1976.