In August 1915, the SS Warilda was requisitioned by the Commonwealth and fitted out as a transport ship. HMAT Warilda made two trips to Egypt and one to England, carrying more than 7,000 troops. Following the Warilda’s conversion to a hospital ship in July 1916, she spent a few months stationed in the Mediterranean, before being put to work transporting patients across the English Channel. Between late 1916 and August 1918 she made over 180 trips from Le Havre to Southampton, carrying approximately 80,000 patients. 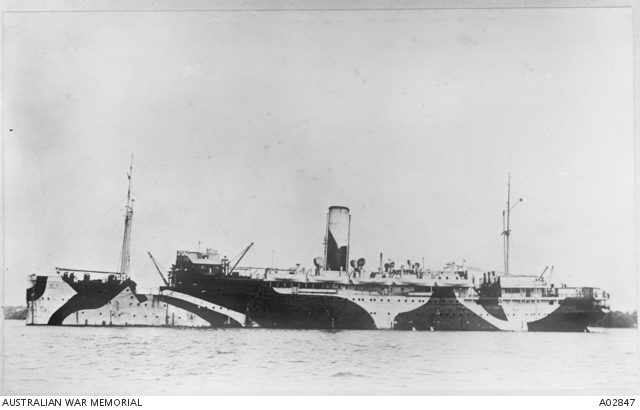 Warilda in camouflage paint added in 1917 after Germany stated all vessels operating in the English Channel would be attacked.

HMAT Warilda survived two potential disasters in early 1918. She narrowly missed being sunk in February when she was struck by a torpedo which failed to explode. Then, in March while her regular captain was having a month break, she collided with the SS Petit Gaudet near the Isle of Wight. The Petit Gaudet was seriously damaged and had to be run ashore in St Helen’s Bay.

On 3 August 1918, the Warilda’s luck ran out. The night was very dark, the sea was smooth and visibility was about half a mile. At 1.35am, a torpedo fired from the German submarine UC-49 took out Warilda’s starboard propeller. The port engine could not be shut down as the engine room had been flooded and the steering gear blown away, so the ship continued moving in a circle at about 15 knots. Life boats could not be lowered until the engine ran out of steam.

HMS P.39, one of the escorts, attempted to tow the Warilda, but had to cut the line when it became clear the Warilda was going to sink. She finally sank by the stern at 4.10am.

That night, the Warilda had 801 people on board. Sadly 123 lost their lives, including all the engine room staff, all the occupants of “I” ward (the lowest ward containing 101 “walking” patients), and 19 people from capsized lifeboats. The fifteen Australians who died in the sinking of the Warilda are commemorated on the Australian War Memorial’s Roll of Honour. 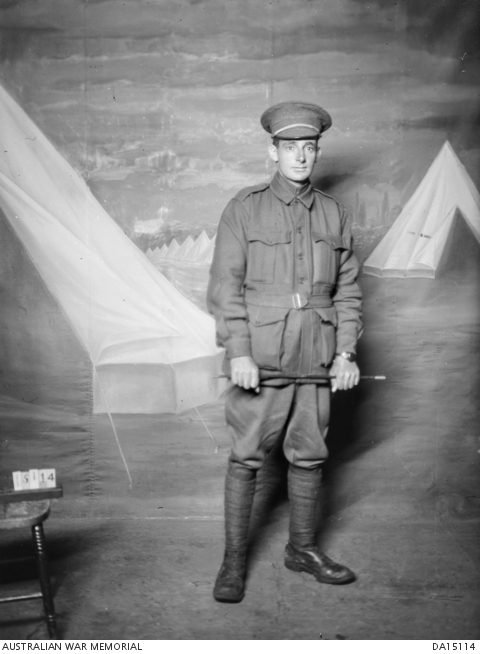 Private Thomas Faulks (3231, 29th Battalion) from Koorong Vale, VIC, was one of 15 Australians who lost their life when the Warilda was torpedoed and sunk on 3 August 1918.

Private George James Tevelein (2403, 38th Battalion) was on board the Warilda that night. He later wrote “we were all shocked by our boat being lifted out of the water, and then seeming to roll over on her side, with all the men tossed out of their bunks. This was accompanied by the roar of a torpedo… It was not necessary to ask what was the matter, as the smell of the explosive soon permeated through the ship”. He described the horror of the occupants of I ward: “Suddenly came terrible screams and shouting from under the deck, which, fortunately did not last long, caused by, as we found after, 153 [actually 101] poor beggars who were trapped in the lower deck and were drowned like rats in a trap.” (AWM, MSS1457)

Private Alfred Edward Taylor (1253, 29th Battalion) was also on board the Warilda when it sank. He had an even luckier escape. He wrote to his mother from the Alexandra Hospital at Cosham, telling her “I was to have gone as a walking case but the Sister and Doctor kept asking me if I could make the trip. I naturally said yes but this wouldn’t satisfy them so they dumps me on a stretcher and the way events turned out later on this saved my life.” (AWM, PR01110)

Many reports praise the discipline on board the Warilda that night. Private Tevelein wrote that “although we were not supposed to be any good at discipline, it seemed as it if came automatically”. Captain James Sim was commended in the London Gazette in recognition of his conduct that night.

Paris newspapers of the 11th inst. publish the following message from Havre, dated 10th instant – “News has reached Havre that the German submarine which sank the Ambulance Ship ‘Warilda’ was herself sunk by a number of British destroyers. The submarine lost a lot of her crew, and the remainder, including the German commander, were captured and taken to England.” (AWM7, Warilda [5]).

The Warilda now lies about 50m underwater, approximately mid-way in the English Channel between Le Havre and Portsmouth. An underwater video of the wreck of the Warilda has been posted on YouTube.