Stoker Norbert McCrory experienced and recorded two of the most dramatic events of the First World War: the raid on Zeebrugge and the surrender of the German fleet. McCrory’s original account of the events is now online as part of a major digitisation project. 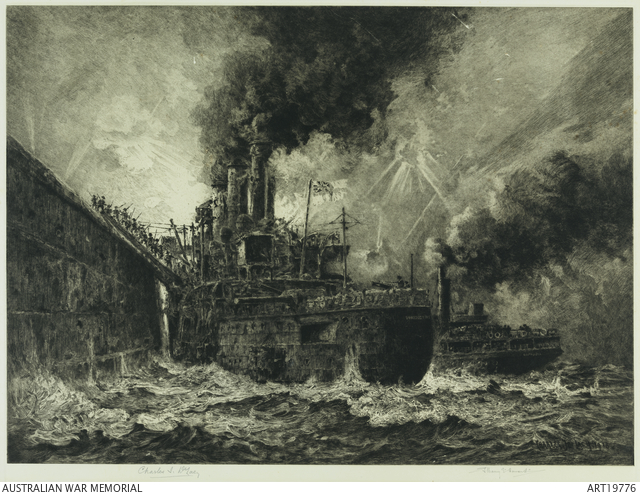 The Storming of the Mole at Zeebrugger, Belgium.

As a stoker on HMAS Australia, then in the North Sea with the Royal Navy, McCrory took part in one of the most daring and dangerous operations of the war at sea. In February 1918 he responded to a call for volunteers for special service.

“Soon it was seen all who wished to go could not be accepted, much to their disappointment.  Only eleven were chosen.”

It would be a dangerous mission.  The plan was to block German-held Belgian ports at Zeebrugge and Ostend.  HMS Vindictive would land forces at Zeebrugge to secure the port’s breakwater – or mole – which the Germans protected with artillery and machine guns.  A naval force would then sink three obsolete cruisers – or block ships – filled with concrete and scrap iron, where an inland canal entered the harbour. With access blocked and lock gates destroyed, German vessels would be unable to reach the open sea. 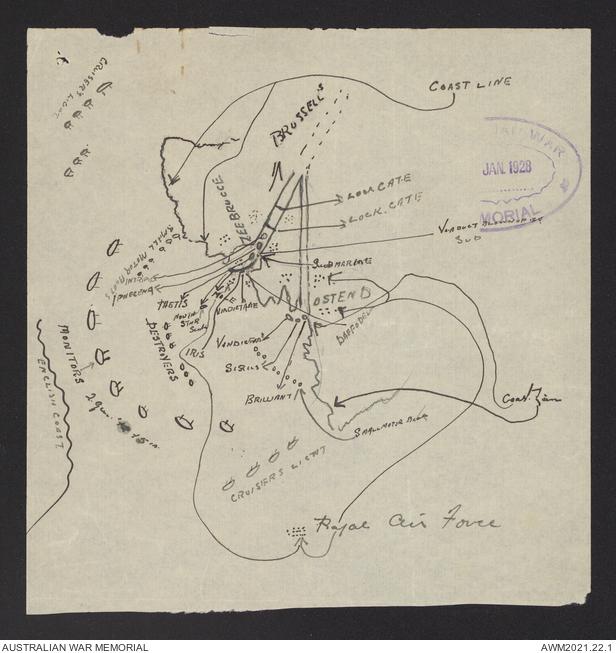 Among the almost 1800 Royal Navy and Royal Marine personnel was a small group of Royal Australian Navy volunteers.  There was some competition between the services.

“Our jobs came along, the sailors to learn all about trench warfare, bomb-throwing and special bayonet drill.  Our seamen did their share and came out with most marks after the Marines had a good try to beat them.”

While the sailors were prepared for landing at the Mole from Vindictive, McCrory and other stokers from Australia joined HMS Thetis, one of the three block ships slated to take part in the attack at midnight on 22 April 1918. Some 165 vessels in all, from warships to submarines and motor launches, were to take part.

“It was our duty while the attack on The Mole was in operation to take our ships, Thetis leading [and] break through the boom defence and penetrate the first [lock] gate and fire, if possible, to sink the second one.

“The Thetis broke through the boom defence at Zeebrugge but went aground in the Channel owing to our starboard propeller fouling the ‘boomed defence’.

“After 25 minutes we released ourselves but not before we had suffered from gunfire our forward gun was blown overboard taking crew with it.  We also had a shot go right through from starboard to port side, leaving a hole large enough for three men to walk through and just clearing the top of our engine room.”

Taking on water and listing heavily, the Thetis was scuttled short of the objective at the entrance to the canal, and the crew retreated on a lifeboat until picked up by a small motor boat.

All the volunteers from Australia returned safely to their ship, the only one that posted no casualty list.  More than 200 sailors and marines were killed, over 300 were wounded.

“You will see by the reading how great was the performance of this great and only successful blockade carried out under the orders from British Naval authorities not only allowing the supply of thousands of troops from America but assisted in hastening the war to an early ending.   We as Australians serving in the R.A. Navy attached the British Grand Fleet were thankful to be offered the grand opportunity to show we were ready to assist in the defence of the empire in this grand and only naval attack of its kind.”

In fact, German access to the ports was hindered for only a few days. The first U-boat slipped past at high tide just two days later. The German widened and dredged the canal so submarines could pass as before.  However, the Zeebrugge raid was a dramatic operation praised in the press for the daring and courage of those who took part. The bravery of the men involved was recognised through the award of eight Victoria Crosses.  The 4th Battalion Royal Marines was awarded the Victoria Cross, requiring the recipients to be selected by ballot.

Seven of the 11 Australians who took part were decorated for bravery. Stoker McCrory was Mentioned in Despatches and was awarded the Belgian Croix de Guerre in September 1921.

“Thus you will see that Australians serving afloat did their little share to keep the Southern Cross before the eyes of all nations and prove their worth.”

From a naval perspective, Britain’s greatest moment came ten days after the armistice, on 21 November. Stoker McCrory witnessed the dramatic surrender of the Imperial German Navy, escorted into the Firth of Forth, Scotland by the Grand Fleet of Allied Forces in the greatest gathering of warships the world had ever seen. Nine German battleships, five battle cruisers, seven light cruisers and 49 destroyers – the most modern ships of the German High Seas Fleet – were handed over to the allied forces. 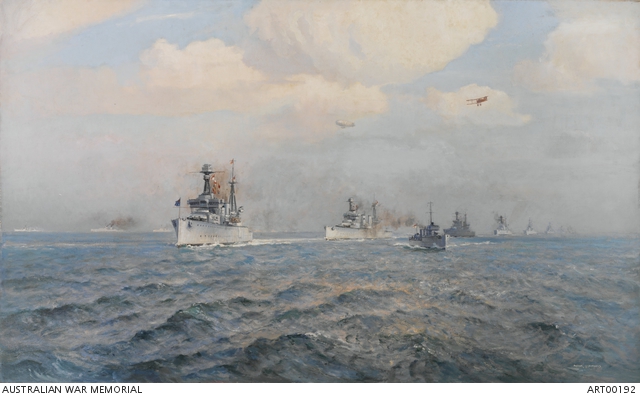 HMAS Australia at the surrender of the German fleet in the Firth of Forth, Scotland.

“The morning was cold and bleak and before long a heavy mist and rain began to fall thereby forming a curtain around the downfall of the second greatest navy in the world.

“The German Fleet received orders from the [HMS] Queen Elizabeth ‘at sunset you will lower your flag and never to fly again without my permission’ this is how the famous German Fleet came to an end before the British Fleet they once they challenged for the Supremacy of the Seas. Now the people may know what the English Navy is to the Empire.

“We were detailed to search the SMS Hindenburg.  On arriving on board we were surprised to find AB’s in charge of the ship. Of course the German Navy had mutinied that is why the Admirals had to take second place on board.  We were treated with the greatest respect and courtesy.  After making a thorough search we arrived on deck to return to our ship but not before we were surrounded by eager Germans asking for food and tobacco etc.

“This fleet, the German, was never built to travel further than the North Sea.  All the space available was used to make the ships one for fighting only.  The personnel was second consideration.  We were told that after 48 hours manoeuvres they would return to port and all live on shore.”

On 25 November, he described the end of the German fleet:

“The German Fleet sails the seas once again but under escort of the British Navy to Scapa Flow for internment.  Their last sail in the North Sea. They were anchored well inside and under strong guard to await further instructions from the British Admiralty.  While awaiting these instructions the Germans opened the sea-cocks and sunk every ship of the once famous and pride of their nation.  This is the end of the German Fleet that tried to tell the world they won the Battle of Jutland.”

Norbert McCrory was discharged in 1922 and later worked as a bank caretaker. He loaned his eyewitness account of events to the Memorial in 1927 as a primary source for the writing of the Official History. Following a request by the Director of the Australian War Memorial he donated his records to the collection in 1928. The records, now online, form part of the Memorial’s major digitisation project enabled through recent funding provided by the Commonwealth Government.