'We scurried into safety' 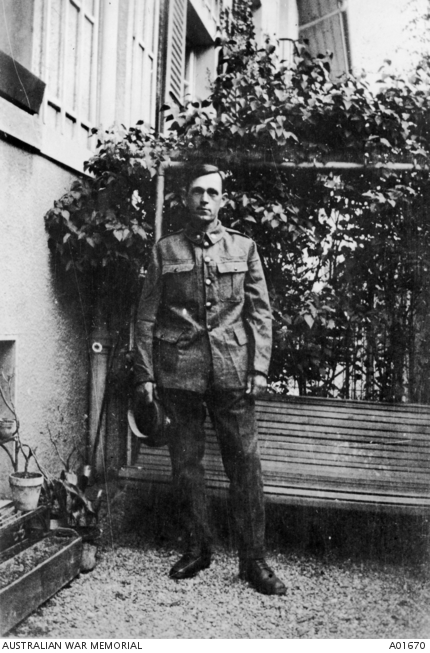 When Sydney Edwards was taken prisoner on the Western Front, he escaped to Switzerland using a bedsheet, a stolen pair of pincers and an Automobile Club map of southern Germany.

A stock and sheep breeder from Western Australia, Edwards travelled 160 kilometres on foot, becoming the first Australian to escape to Switzerland during the First World War.

Edwards had served on Gallipoli, and was captured in France while taking part in the 51st Battalion’s attack on Mouquet Farm on 3 September 1916.

“Somehow the Germans had got in behind the position and were hurling bombs in over the back of the trench,” he wrote. “We had no bombs with which to reply … [so] about seven of us made an effort to reach the shell-holes. We found the shell-holes so crowded with wounded men that to put up a fight there was impossible. We then made an effort to get back to the farm, some 200 yards in our rear, but a sniper’s bullet got me in the thigh and effectively put me out of action.”

A company quarter master sergeant, Edwards was interned at Grafenwöhr in Germany before being transferred to a prisoner-of-war camp at Nuremberg.

As a non-commissioned officer, Edwards was not required to work for his captors, but in June 1917 he was transferred to a punishment camp at Lechfeld for refusing to carry out manual labour.

“The food was atrocious,” he wrote. “The staple diet of the issue ration was turnips and water … We practically lived on the food parcels we got from the Australian Red Cross Society … Without the parcels we might have managed to exist, but not more.”

Edwards eventually volunteered for farm work, and was sent to the village of Deisenhausen.

On 29 April 1918, he escaped with a French sergeant named Levasseux. Using a stolen pair of pincers, the pair cut barbed wire from a window and wrenched the bars from the woodwork before lowering themselves out of the window using a bed sheet. 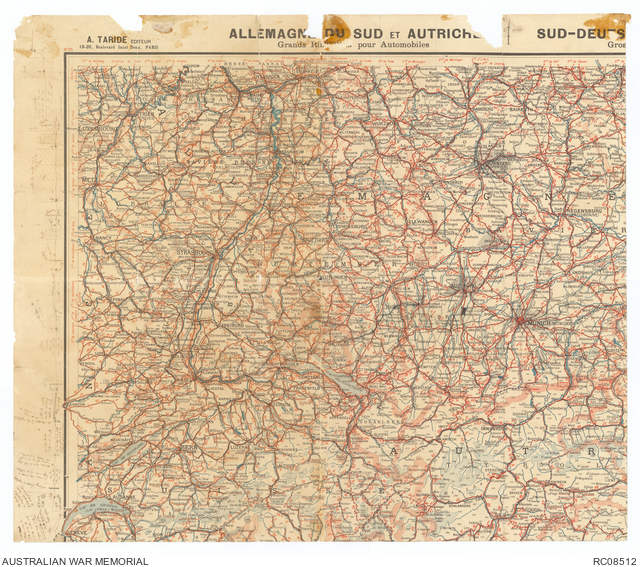 French road map of southern Germany and Austria used by Sydney Edwards, the first Australian to make a successful escape to Switzerland during the First World War. On the map Edwards plotted his route from Lechfeld prisoner-of-war camp, just south of Augsburg, to the Swiss frontier near Schaffhausen, a distance of 160 kilometres which he travelled on foot from 29 April to 9 May 1918. In the margin are Edwards' handwritten notes describing his progress and conditions along the way.

“It was midnight when we got clear of our quarters,” he wrote.

“We had to clamber down past the room in which the sentries lodged. It was immediately beneath the room occupied by us.

“My French comrade lowered down our haversacks which we had stocked with provisions for the road… rations biscuits … chocolate and Oxo.

“We had a map and a compass. The map was a German Automobile Club Map of South Bavaria. I had swapped some food stuff to a German for it. The compass I obtained from a German at Lechfeld in exchange for a piece of soap.

“To lower these and ourselves we used a bed sheet, the only sheet I had seen in Germany.

“We had very little sleep for it was very cold in the woods, even in the daytime.

“We had some cocoa and I had improvised a sort of ‘camp-cooker’ out of a Havelock tobacco tin and some fat. In the circumstances, the warm cocoa we were able to brew did us the world of good.”

Travelling at night and hiding during the day, the pair successfully crossed the Swiss border on 9 May 1918.

“The frontier line is guarded by sentries about 100 yards apart, but happily for us the sentries did not properly patrol,” he wrote.

“The country was fairly devoid of cover at the frontier, but we managed to crawl the last few hundred yards between the sentries without being seen.

“We were not noticed until we were about 100 yards on the Swiss side. Then one of the sentries fired, but neither of us were hit, and we scurried into safety.

“We were just about done up, but we were safe on neutral soil.”

They surrendered themselves to the Swiss gendarmerie at the tollhouse at Thaingen and were sent to Berne where they were interviewed about their escape.

“I was taken in hand by the British Consul and my comrade was handed over to the French Military authorities,” he wrote.

Edwards was repatriated to Australia in June 1918, and awarded the Military Medal for "gallant conduct and determination displayed in escaping ... from captivity".

The map Edwards used during his escape is now part of the collection at the Australian War Memorial.

“The escape map collection is really interesting,” she said.

“At this point in the war, German supply lines had been severely disrupted, so the luxury items in the Red Cross parcels became a really good source for prisoners to use as a form of bribery to get their hands on the items that they needed.

“Edwards plotted his route on the map and made handwritten notes in the margin describing his progress and the conditions along the way.

“More than 100 years later, it gives us a fascinating insight into Edwards’ story of bravery, daring and luck during the First World War.”