Concert parties were one of the ways soldiers were able to entertain themselves during the war. They were created on board troopships, within units, divisions, prisoner of war camps, training and convalescent camps. One example was the Perham Stars who later became known as The Aussies. 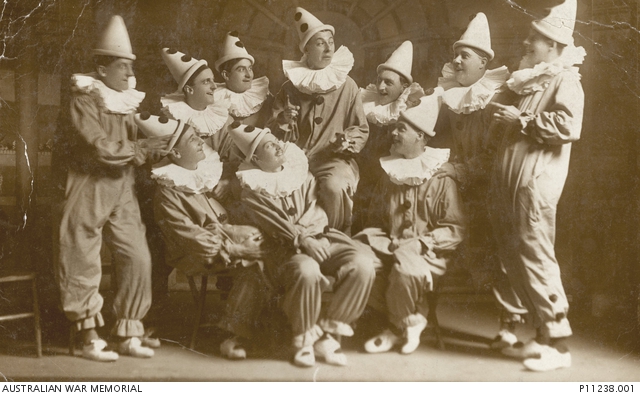 The Perham Stars was established at 1 Command Depot at Perham Downs in Wiltshire, England. The men at the Depot were those who had been wounded or succumbed to illness and their physical ability was being assessed or improved so they could return to the front.

Men were graded into three classes:

These classes became more complex as the war progressed but more detailed information about this and about how the Depots operated is available in Volume 2 of the Official History of the Australian Army Medical Services.

Those that had regained their fitness to become “A” class men were “hardened” in Training Brigades before being sent overseas again. “B” class men would undergo special treatments, exercises and courses to try to attain “A” class status. Those determined to be “C” class men would usually be sent home. Between July 1917 and November 1918 134,104 men went through Australian Command Depots. Of these, 46,871 were invalided home as permanently unfit. Some of the “B” and “C” class men served in the Perham Stars concert party.

The Perham Stars was originally established under the direction of Lieutenant Gustav Schemalleck in 1916 and had a rotating cast as men moved in and out of the Depot. In late 1917 the depot moved from Perham Downs to Sutton Veny, also in Wiltshire, but the concert party decided to keep the name Perham Stars.

Some of the men in the concert party were amateurs, while others had come from professional entertainment careers. One professional was “the irresistible comedian” Lieutenant Arthur Boorman. Born in Britain, he had previously worked in comedy under the name “Arthur Riscoe”. In Australia he spent two years with a group called The Dandies before he enlisted in the AIF under his real name – Arthur Charles Boorman and he performed under this name while with the Perham Stars and The Aussies. He was also its manager and producer in 1918.

Boorman was described as a “rubber-faced star of comedy theatre” and he requested an early discharge in December 1918 in England in order to play the leading comedy part in the  operetta ”The Lilac Domino”, one of the three most popular musical plays in the United Kingdom at the time. After his discharge from the AIF, he returned to his stage name of Arthur Riscoe. As well as his work on the stage, he later went into cinema, performing in several films.

In addition to entertaining the troops, the Perham Stars began to spread their talents through the community. In the latter part of 1917 they gave concerts at the Aldwych Theatre in London and also began to tour their performances to help raise money for various charities, including for Red Cross Hospitals and Prisoners of War funds. They also raised money from early 1918 for the General Officer Commanding’s [GOC] fund for widows and children, established by Lieutenant Colonel William Mansbridge.

Around April-May 1918 the concert party changed its name to The Aussies. It continued to perform through various English town and cities, raising money for charity, before disbanding when many of their number were sent back to France as “A” class. The party was re-established in June with a new cast. 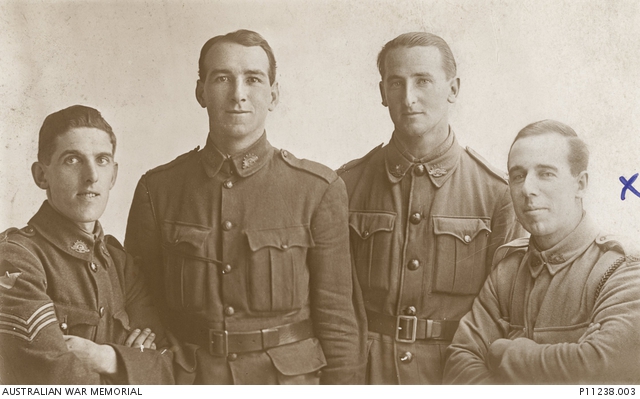 The Memorial holds a number of costumes and props used by the Perham Stars and The Aussies that were owned by Ernest ‘Nick’ Nicholls. Like Boorman, Nicholls was also born in England and he performed with a children’s group there before coming to Australia where he worked as a film operator in picture theatres. He enlisted in the AIF and served on the Western Front until 1917. While with the Perham Stars he wrote 'Laughing Song' and co-wrote the song, 'The Kit Inspection Hymn' with Staff Sergeant George William Waight. Both were performed by the Perham Stars and The Aussies. While the lyrics still exist, unfortunately the music appears to have been lost.

The Memorial holds three pairs of 'bones', probably made from cow ribs.The bones (a type of clapper) is a percussive instrument held in one hand as a pair. The bones have a history spreading back thousands of years and were played by minstrels in the 19th century and so were used in the concert parties for their minstrel performances. The bones are still played today – particularly in folk music.

One costume worn by the concert party was a handmade red and white striped tail coat with matching trousers, possibly adapted from some pyjamas. An interesting feature of this costume is the buttons on the jacket – they are small gilded navy style buttons.

With no females in the cast, some soldiers played the role of women and were attired accordingly. Female impersonators were an important part of any concert party, both for comedic value but also for more dramatic pieces. The female impersonator’s jewellery is of particular interest as it is large and ostentatious – both to fit a man, but also be effectively seen on stage from a distance.

This diamanté heart ring is made from a costume jewellery brass ring with a decorative design on the front. It may have originally featured a central stone or other feature. A diamanté and brass heart pendant has been soldered to the front of the ring. The original pendant hoop on the heart has been squashed down so it is not obvious but not removed.

This large diamanté ring may have begun life as something else, maybe a napkin ring or some type of decoration, although there does not appear to be any adaption to the item, so may have been a piece of inexpensive, ostentatious costume jewellery. With the stone as large as it is (3 cm in diameter) it certainly would have looked effective reflecting the house lights. 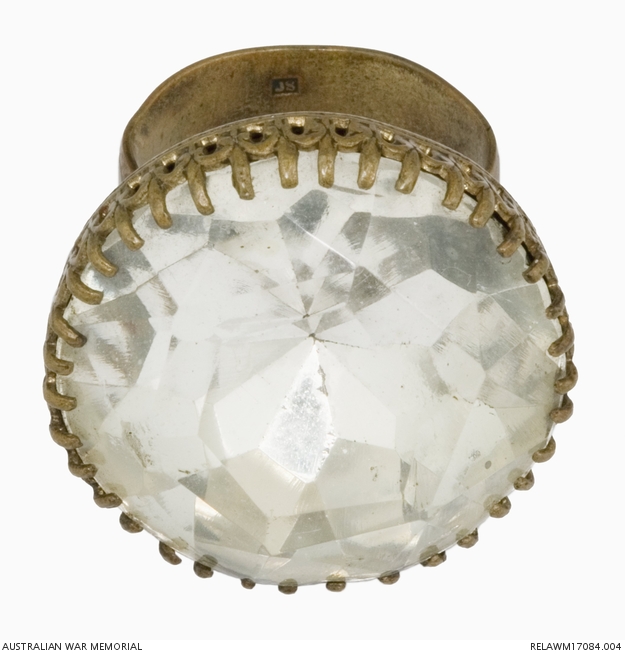 Large ring for a female impersonator.

The gilded bracelet may have been commercially made, rather than improvised, but it would have been a perfect size for a man's wrist. 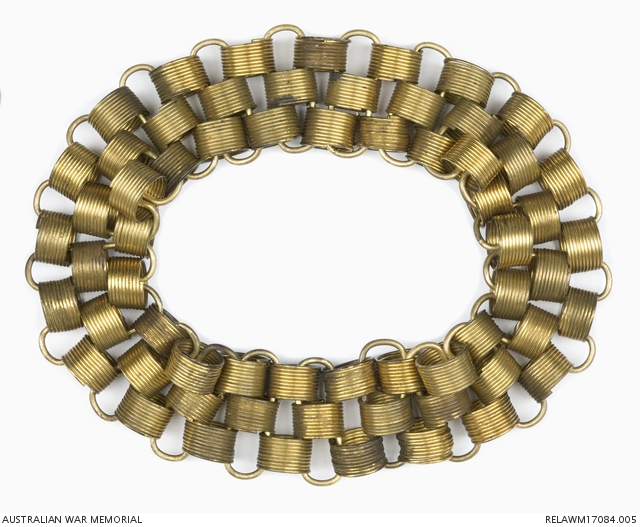 Bracelet worn by one of the female impersonators.

This brooch is one of my favourite items because of how it is made and what it is made from. It shows how the concert parties would use anything they could get their hands on to make something that could look glamorous from a distance. The brooch is made from a cut down food tin lid and has had length of diamantés attached by solder to cover the front of the lid. It no longer has its pin, but you can see where it was once soldered to the back of the tin lid.