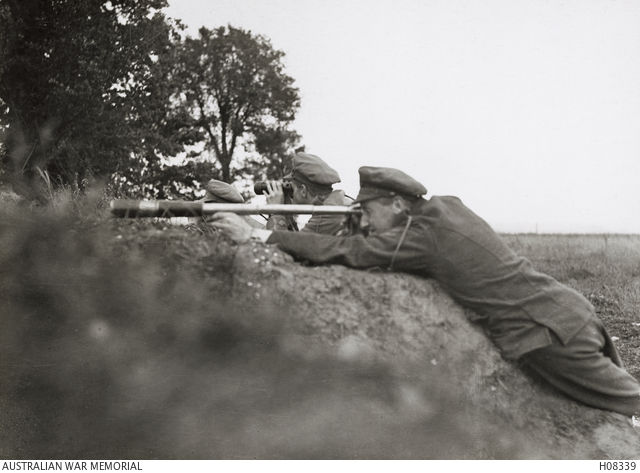 Pozieres, France. c. 1916. British Army artillery observers using a telescope and binoculars to assess the result of a bombardment.(Donor British Official Photograph A141)

In the early morning of 1 July 1916, more than 100,000 British infantrymen were ordered from their trenches in the fields and woods north of the Somme River in France, to attack the opposing German line.

Within 24 hours, the British army would suffer almost 60,000 casualties, a third of whom were killed, and record the most costly day in its history.

Today marks the 105th anniversary of the start of the Somme offensive, a series of fierce and ultimately futile battles that consumed the British, Australian and Dominion forces for much of 1916. The offensive was eventually abandoned on 18 November with staggering troop losses and little ground gained.

The assault was originally planned as a joint French–British offensive which was part of a wider strategy of attacking Germany simultaneously on the Western and Eastern Fronts, with the aim of destroying Germany’s reserves of manpower. The massive German attack launched on the French fortress of Verdun on 21 February 1916 significantly reduced the French contribution to the Somme campaign, which was also being launched, in part, to divert the Germans’ attention from Verdun. Britain’s “new army’’ – a volunteer force similar to the AIF – was required to step up.

“At the start of 1916, the French called on the Brits to play a bigger role on the ground, which they agree to do at the Somme,” explains Peter Burness, a former senior historian at the Memorial. “But these were not professional forces, or large conscript ones such as the German and French armies were – these were men from all walks of life who joined up in their communities.” Hundreds of men from communities large and small would join up together, give their units nicknames such as “Pals”, and die together, leaving their towns and villages devastated. 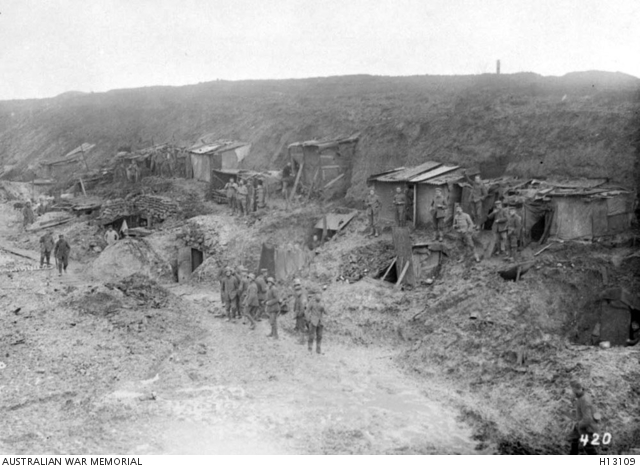 Britain’s generals lacked confidence in the abilities of their men, which meant there was a distinct lack of imagination or innovation in the tactics employed.

“The application of artillery was still rather simple in 1916: to bombard the enemy’s position, then send in the infantry and charge through after with the cavalry,” Burness says. “The British and French were always looking for the breakthrough, to fracture the enemy and drive them out. They wanted to see the Germans in disarray, to make a wild retreat.”

The Germans, however, were deeply entrenched on the Somme. They had been honing their defences and their war weapons since the trench line zig-zagged its way across France and Belgium in the autumn of 1914. The Germans had built an impregnable and sophisticated wall of barbed wire, deep dugouts and machine-gun posts on favourable locations in difficult country. They had a formidable position on the Somme, and the British underestimated their preparedness.

Despite days of shelling immediately before the assault on 1 July, the British were unable to smash the German dugouts, and belts of wire remained uncut. The Germans also had many guns that outranged those of the British, or were kept silent and well hidden until the offensive began.

In his memoir The old front line, British poet laureate John Masefield, who spent months at the front, includes a German’s account of the start of the assault, at 7.30 am on July 1:

They came on at a steady easy pace as if expecting to find nothing alive in our front trenches ... a few minutes later, when the leading British line was within 100 yards, the rattle of machine-guns and rifle fire broke out from along the whole line of craters.

The advance rapidly crumpled under this hail of shells and bullets. All along the line men could be seen throwing their arms into the air and collapsing never to move again. Badly wounded rolled about in their agony, and others less severely injured crawled to the nearest shell-hole. The noise of battle became indescribable ... Again and again the extended lines of British infantry broke against the German defence like waves against a cliff, only to be beaten back. It was an amazing spectacle of un-exampled gallantry, courage and bull-dog determination on both sides.

All along the 30-kilometre front, the same annihilation was taking place. In his book, The first day on the Somme, Martin Middlebrook records the experience of Private W. Slater, 18th Battalion, West Yorkshire Regiment (known as the 2nd Bradford Pals):

For some reason nothing seemed to happen to us at first; we strolled along as though walking in a park. Then, suddenly, we were in the midst of a storm of machine-gun bullets and I saw men beginning to twirl round and fall in all kinds of curious ways as they were hit – quite unlike the way actors do it in films. 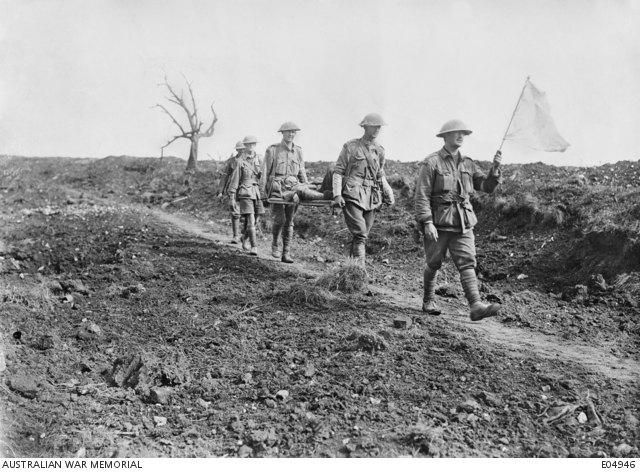 Australian stretcher bearers coming in under a white flag, passing the old cemetery of Pozieres, having come from the line near Mouquet Farm. 28 August 1916

The first day of the Somme offensive has a relevance to the British today that is akin to the landing at Gallipoli for Australians.

“It was a day of high hope and expectation, and it ended in disaster,” Burness says. “To a new generation, that realisation had a real impact. There was so much expectation that was destroyed on the battlefield.”

Despite the enormous losses of that first battle at the Somme, the offensive continued through summer and a particularly wet autumn until the first snow fell on 18 November 1916. The Australian Imperial Force, consisting of men who had fought at Gallipoli and fresh volunteers from home, arrived at the Somme in late July.

The major contribution of Australian troops to the Somme offensive was in the fighting around Pozières between 23 July and 3 September. The 1st, 2nd and 4th Australian Divisions suffered more than 24,000 casualties at Pozières, including 6,741 dead. Official war correspondent C.E.W. Bean described the small village as “more densely sown with Australian sacrifice than any other place on earth”.

When the Somme offensive ended, the allied forces had managed to advance only 12 kilometres. It had come at a cost of 430,000 British and Dominion troops and 200,000 French casualties. The offensive destroyed Britain’s mass volunteer army, and for the rest of the war it would be reliant upon conscription for reinforcements. It had also resulted in heavy German casualties, about 230,000 according to current scholarship. The German army never recovered from its loss of experienced junior officers and non-commisisoned officers on the Somme. To those who fought there, and for the present generation, the Somme was synonymous with slaughter.

This article was originally published in 2011.