Forty years ago, in May/June 1968 Australian soldiers fought their largest, most sustained and arguably most hazardous battles of the Vietnam War. Units of the 1st Australian Task Force (1ATF) confronted regimental-sized formations of the North Vietnamese regular army in fierce actions around Fire Support Patrol Bases (FSPB) Coral and Balmoral in what was then known as Bien Hoa province. The location of FSPBs Coral and Balmoral are marked by blue symbols on this satellite map.

Representatives of the units involved in the battles have established the National 40th Coral and Balmoral Anniversary Committee, which is coordinating commemorative events in Canberra and Townsville starting on 12 May 2008. More information can be found on the DVA website.

The first of the battles occurred at FSPB Coral when massed enemy units attacked the base in the early hours of 13 May 1968. Australian units withstood heavy enemy attacks during which a mortar platoon and two gun positions were partly over-run. The Australians drove off the enemy after fierce close-quarter actions. The battle lasted over two hours. The task force suffered 11 killed in action and 28 wounded. In one mortar platoon five soldiers were killed and eight were wounded from a total strength of 18 men. One howitzer and two mortars were damaged. The enemy left 52 dead strewn throughout and around the fire support base. 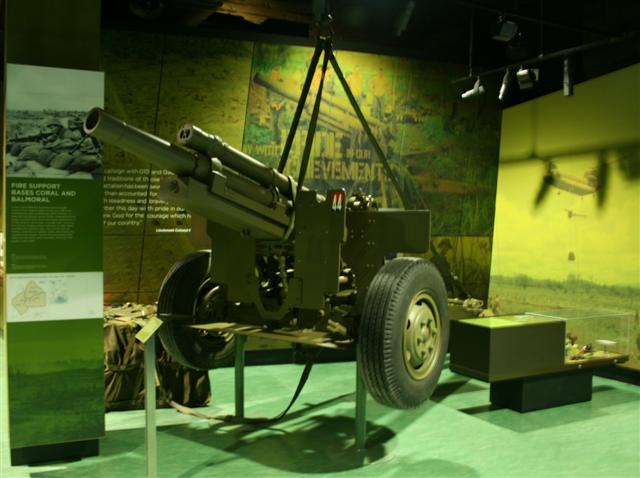 One of 102 Field Battery’s six 105 mm M2A2 howitzers which was overrun by the enemy and then re-taken by Australian troops. It is shown here on display in the Memorial’s “Conflicts 1945 to today” galleries.

A history of Australian artillery records that the attack on Coral was "the most sustained ground attack on an Australian field gun position since the Pacific war. Yet the gunners recovered their guns and were in action, supporting the infantry, the following morning."

Over the following four weeks, in further actions around FSPB Coral and Balmoral, Australian soldiers accounted for over 300 enemy soldiers killed. They also captured hundreds of enemy weapons. In return, 26 Australian soldiers died: two from 12 Field Regiment; one from 104 Signal Squadron; 16 from 1 RAR; 6 from 3 RAR and one from 161 Independent Reconnaisance Squadron. Over 100 Australians were wounded. Australian Army regiments involved in the series of battles were later awarded one of the five battle honours approved for the Vietnam War.

Operation Toan Thang I (‘Complete Victory’) which ran from 21 April to 7 June 1968 was one of the largest operations mounted by the 1st Australian Task Force (1ATF) in South Vietnam. All available combat units and support elements from the 1ATF base at Nui Dat were committed beyond the borders of Phuoc Tuy province during the course of the protracted operation.

A forward element of 1 Field Squadron Group deployed at Fire Support Patrol Base (FSPB) Coral on 12 May 1968 and was present when the hastily-prepared base was partially overrun by regular forces of the North Vietnamese Army (NVA) on 13 May. The remainder of the unit arrived with the 1ATF combat and support units later that day and were allocated a segment of the base perimeter. The engineers “occupied almost one-third of the fighting perimeter for the full duration of the operation of 26 days and repelled human-wave ground attacks from NVA units during the heaviest fighting at FSPB Coral on 16 May 1968”, according to George Hulse, who (as a Lieutenant) commanded 1 Troop, 1 Field Squadron, Royal Australian Engineers, during the battle. “The engineers held fast”, Hulse proudly recalled.

For details of records, film, photographs, relics and other items related to 1 Field Squadron, Royal Australian Engineers (RAE), in the collections of the Australian War Memorial, see: /collection/U53457

Two short video clips from action at Coral/Balmoral have now been uploaded to YouTube: 3 RAR Action in Vietnam and Attack repulsed at Australian base.

A recently donated letter written by Tom Loughridge from 1 RAR, details his impressions of the battles. The letter may be read in full here (0.4Mb PDF file). Descriptions of more Private Records of interest can be seen here. In addition, there are over 200 images in our collection relating to the battles. Here is a representative selection of 40.

Digitised unit war diaries for some units which were involved in the battles are now available on our website. You may view the diaries for the following units over the period May and June 1968: 1 RAR, 3 RAR and C Squadron 1 Armoured Regiment. You can also view the full Combat Operations After Action Report from the 1st Australian Task Force, Vietnam for Operation Toan Thang (Phase 1).

Other items from our collection including films, sound recordings, heraldry and technology items can be found via our Collection Search. Try an Advanced Search using "Coral" OR "Balmoral" (as Search Terms) and "Vietnam War" selected from the conflict drop-down.

We would be interested to hear from anyone who has further material to add the the Memorial's collection regarding the battles of Coral and Balmoral.

For a detailed account of the battles of Coral and Balmoral, see: Ian McNeill and Ashley Ekins, On the Offensive: The Australian Army in the Vietnam War 1967-1968, volume eight of The Official History of Australia's Involvement in Southeast Asian Conflicts (published by Allen & Unwin in association with the Australian War Memorial, 2003), chapters 12, 13.