The bomb: what it meant to Australians

The announcement of the dropping of an atomic bomb on Japan brought an uplift of spirit among personnel. The end of the war, hitherto a nebulous source of conjecture, suddenly became a definite possibility within a matter of days, even hours. Crowds imbued with eager anticipation mustered round the unit’s radio sets for each news session and gasped with amazement as statistical information about the potentialities of the bomb were unfolded. [57th/60th Australian Infantry Battalion war diary, 8 August 1945]

Whether fighting in the jungles of Bougainville or working in a factory at home, Australians were rocked by the news that an atomic bomb had been dropped on the Japanese city of Hiroshima on 6 August 1945.

The action – one of the most divisive and debated in military history – came as a surprise to the Australian government, who as minor allies with Britain and the United States had not been privy to such top secret developments. But it was not an unwelcome decision: after almost six years of fighting on fronts in Europe, North Africa, Asia and the Pacific, the war-weary troops were itching to return home, and their loved ones were desperate to have them back. The bomb, it was anticipated, would bring the war swiftly to an end.

More than 200,000 Japanese were killed by the two atomic bombs, nicknamed Little Boy and Fat Man, dropped on the cities of Hiroshima and Nagasaki on 6 and 9 August respectively. On 14 August, following subtle assurances from the United States that the Emperor could stay on the throne, Japan surrendered.

In Australia, the first news of the blasts was focused on the power of the bomb. The Sydney Morning Herald was the only newspaper to report the story on 7 August (other newspapers were a day behind), its front page headline announcing “Atomic Bomb on Japan. Huge Blast Effect”.

“An atomic bomb, with more power than 20,000 tons of TNT and producing a blast 2,000 times greater than the largest bomb previously used, was dropped on Hiroshima (Japan) today,” the correspondent in Washington wrote. “This is the first of many that will be used to complete the destruction of Japan.”

There was no mention of the damage done, or the lives lost.

The following day’s Sydney Morning Herald headline announced that the bomb “May End War. Big Possibilities in Peace”, but its editorial reflected considerable anxiety about this new weapon.

The first atomic bomb to be dropped on Japan has done far more than wreck the city of Hiroshima. It has shaken civilisation to its foundations ... If the invention of gunpowder revolutionised the art of war, the release of atomic power may very well, in time, spell the very end of war itself: either that or the human family is doomed to perish by its own hand.

Such concerns were far from the minds of those Australians still at the front. They were focused on the prospect that this new weapon would win the war. Victory could not come quickly enough for the men of the 8th Battalion, who were still engaged in a difficult and dangerous fight against an aggressive Japanese force in north Bougainville.

“Morale of the troops was raised considerably by the news of the first Atomic Bomb being dropped on Japan,” it was recorded in the battalion’s war diary on 8 August. “Bets are being taken for the day of Japan’s surrender.”

It took weeks, even months, before the real level of damage and destruction in Hiroshima were known to Australians and the international community. By 23 August The Sydney Morning Herald, quoting a Tokyo report, carried news that the death toll in Hiroshima was 60,000 people; another 60,000 had died instantly at Nagasaki, it said. In her essay, “‘The world was black’: initial Australian reactions to the dropping of the atomic bomb on Hiroshima and Nagasaki”, Kay Saunders noted that journalists knew that “slow lingering deaths ensued from radiation”, but “could not find the words to define or describe the dimensions of suffering ... Certainly no images of the damage to human beings was produced in Australian newspapers in 1945.”

But there was another group suffering, too: Australian prisoners of war, many of them starving in prisons and camps throughout Asia, captives of the Japanese.

Former prisoner Hugh Clarke believed that if the bomb had not been dropped, he would surely have been killed by the Japanese when the Allies invaded the home islands – two massive invasions were being planned, for the island of Kyushu in November 1945 and Honshu in March 1946.

“There was a directive by the Japanese high command that all prisoners were to be eliminated at a certain date [if Japan was invaded],” Clarke told The Independent Monthly in an interview before the 50th anniversary of the bombings.

Clarke was working in a naval dockyard in the Japanese port city of Fukuoka when the bombs were dropped. He said that while he did not know what had occurred, after the first bomb hit Hiroshima on 6 August, “the behaviour of our guards changed ... They stopped bashing us, for a start, and they were pre-occupied among themselves.” Before then, the Japanese had shown no signs that they would be likely to surrender; blanket bombing of the country by the Americans seemed only to strengthen their resolve to fight to the finish.

“They were training women and children to fight with sharpened bamboo sticks and I am quite convinced they would have fought to the last man if there was an invasion,” Clarke said. “Suddenly a whole bloody city was obliterated, they [the Japanese] were absolutely stunned. In the circumstances, it had to be something incomprehensible to the Japs to make them stop. They could not comprehend it; well, we couldn’t either.”

In the decades since the bombs were dropped, debate has raged about the morality of using such a weapon of indiscriminate power, and whether it was necessary to end the war. Back in 1945, Australians were not immune to feelings of unease about atomic power, but there seemed little question about the need for something drastic to be done to bring the bloody fighting to a close. But for the following 40 years of the Cold War, the spectre of nuclear power made very real the possibility of MAD – mutually assured destruction – and shaped politics on both sides of the Iron and Bamboo Curtains. 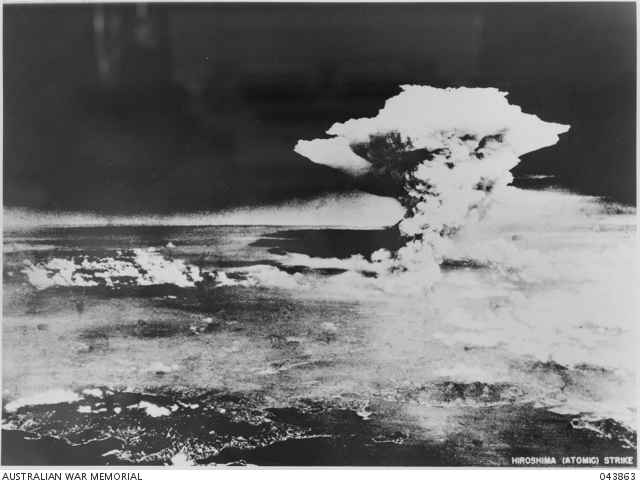 HIROSHIMA, JAPAN, 1945. THE FIRST ATOM BOMB WAS DROPPED ON HIROSHIMA ON 1945-08-06. SHOWN, THE MUSHROOM CLOUD RISING AFTER THE IMPACT. (PHOTOGRAPH DONATED BY MR HIROSHI MIYAZAWA, GOVERNOR OF THE PREFECTURE OF HIROSHIMA).