The Kokoda “Track” or “Trail”?

That terrible track which is now known as the Kokoda Trail. George Johnston, New Guinea diary, 1943

In recent years, many hours have been wasted and much ink has been spilt debating whether the foot route across the Owen Stanley Range, in Papua New Guinea, should be called the “Kokoda Trail” or the “Kokoda Track”. Both terms were used interchangeably during the war, and at the time they were not considered to be mutually exclusive. Now, though, as Kokoda takes on an ever-increasing prominence in Australia’s military pantheon, second only to Gallipoli in the nation’s sentiment, the “track” versus “trail” debate has become an impassioned, and at times almost belligerent, argument. Supporters of “Kokoda Track” object to the use of the word “trail” on the grounds that it is considered to be an American word, whereas “track” is strongly associated with the language of the Australian bush. Those who favour “trail” are quick to point out that the “Kokoda Trail” is the title of the army’s battle honour and the name gazetted for the route by the Papua New Guinea (PNG) government.

The foot path across the Owen Stanley Range was first used by Australians during the 1890s to reach the Yodda goldfield on the north coast. In 1899, the government surveyor H.H. Stuart-Russell spent three months marking out and mapping the route. It came into regular use in 1904, when a government station was established at Kokoda and an overland mail service between Port Moresby and the north coast began [1]. The central problem at the heart of the “track” versus “trail” debate is that this mail route over the mountains did not have a formal name before the Second World War. 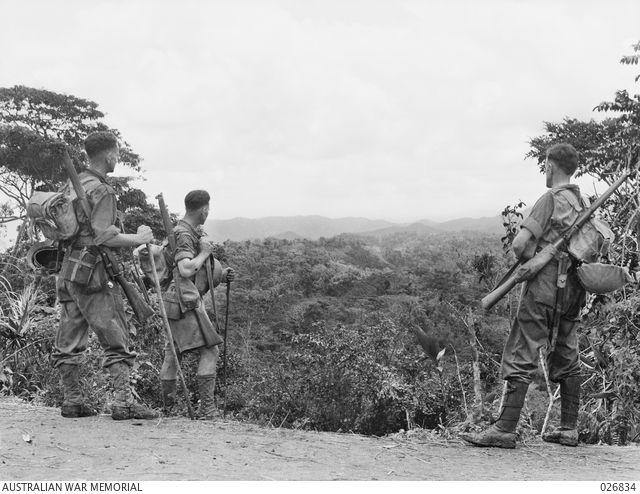 Pre-war records regularly used the word “road” as a way to distinguish regularly used paths in the territories, regardless of their actual condition. The British New Guinea Annual Report for 1921–22, for example, stated that there was “a pedestrian road” from Port Moresby across the Owen Stanley Range and noted that “the scenery en route is magnificent” [2]. The name “Kokoda Road” was used up until the early part of the Kokoda campaign, but with the influx of Australians new to the territory during 1942, the description “road” was largely replaced by “track”.

This use of “track” is reflected in the new maps that were produced by army survey units in September and October; on these maps, all routes across the Owen Stanley Range were referred to as “tracks” [3]. The terrain study Main routes across New Guinea, printed by the Allied Geographic Section in October 1942, similarly describes the route from Port Moresby via Kokoda to Buna as a “track” [4].

The overwhelming majority of soldiers who fought the campaign also used “track”. In a survey of unit war diaries, letters and personal diaries written during the campaign, Peter Provis, a Memorial summer scholar, found that the word “trail” was used only once in a war diary, in the 2/31st Battalion on 11 September 1942. There were, however, also references to “track” [5].

Transported by lorries as far as UBERI track which was trafficable. Proceeded per foot along UBERI trail – through OWERS CORNER down to GOLDIE RIVER – up to UBERI where night was spent. This track was particularly tough – single file – mud up to knees. [6]

Provis likewise found that “trail” was used only once in a soldier’s personal diary. On 25 July 1942 Warrant Officer II George Mowat, a Great War veteran serving with the 39th Battalion, wrote in his diary that the “Trail [is] rough steep and slippery”. But two days later he wrote: “Track slippery some places had to crawl. ” [7] Although both terms were used, it is clear that the diggers themselves preferred “track”. It is also reasonable to conclude that soldiers would have used “track” in their speech. It is worth mentioning, however, that rarely were the fuller expressions, “Kokoda Track” or “Kokoda Trail”, used. “Track” was usually used in a generic sense, in reference to a particular track leading to a village or between villages. 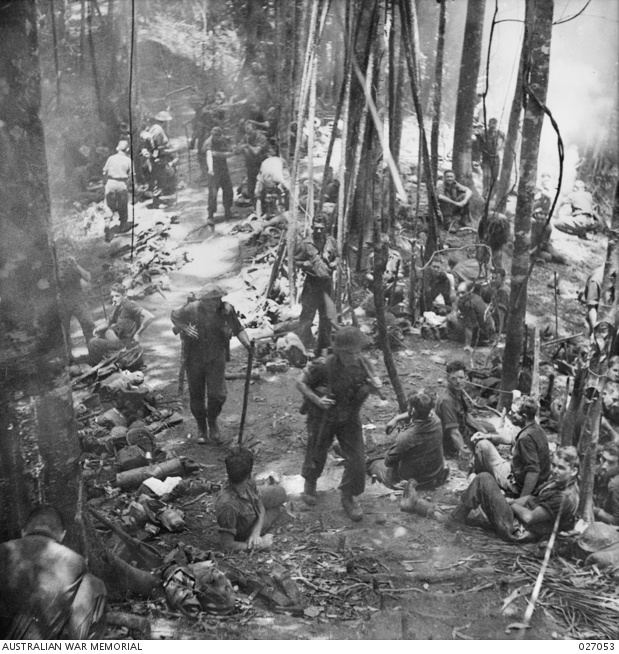 It is commonly assumed that American war correspondents in Port Moresby were responsible for coining the term “Kokoda Trail”. The Australian correspondent Geoff Reading, however, has repeatedly claimed that he was the person responsible for this designation. His first use of the title was in a story for Sydney’s Daily Mirror, filed from Port Moresby on 26 October 1942, which carried the bold headline: “Kokoda Trail … a Diary of Death”. Reading’s motivation was entirely practical.

I did it because along with the other correspondents at the time, I didn’t know what to call it … I got sick of typing descriptions such as “Imita–Ioribaiwa–Nauro track”. I called it Kokoda Trail to save typing. [8]

The Sydney Morning Herald, the Daily Telegraph, and the Melbourne Argus, been using “trail” since mid-September 1942 [9]. The “Kokoda road” also made the occasional appearance, but most Papua-based correspondents used both “track” and “trail”. By the end of October there was a move for Australia-based journalists to adopt “Kokoda trail” – with a lower case “t” [10]. According to historian Hank Nelson, it was these journalists, using communiqués from General Douglas MacArthur’s headquarters, who began to adopt the American expression “trail” [11]. The use of both names continued after the war. In many manuscripts and published memoirs, veterans use both “track” and “trail”, depending on their individual preference. Even the authors of the multi-volume Australian official Second World War histories were split over the issue. Dudley McCarthy, the author of the relevant volume, South-West Pacific Area (1959), for example, uses “Kokoda Track”. The authors of the other volumes divide fairly evenly. Further complicating matters, however, McCarthy uses a map drawn by Hugh W. Groser, titled “The Kokoda Track” that has “Kokoda Trail” inscribed along the route [12].

The case for adopting “trail” was given considerable weight with the granting of the battle honour “Kokoda Trail”. In May 1946 the Battles Nomenclature Committee was established in the United Kingdom to tabulate the actions fought by the land forces of the British Empire during the Second World War and to define each action. An Australian Battles Nomenclature Committee was formed the following year to tabulate Australian actions in the Pacific [13]. When a provisional list of Australian Pacific battle honours was completed in 1947, the designation “Battle of the Owen Stanley Range” was suggested for the Kokoda campaign. By June 1948, however, the provisional honour had changed to the “Kokoda Trail” [14]. Ten years later, when the committee’s final report was published, “Kokoda Trail” was adopted as the official Commonwealth battle honour. This battle honour was awarded to ten infantry battalions as well as to the Pacific Island Regiment. The 39th Battalion Association tried unsuccessfully to have the honour changed to the “Kokoda Track” [15]. Evidently, other associations did not feel as strongly about the term or they accepted the official use of “Kokoda Trail”. In 1997, Australian War Memorial historian Garth Pratten surveyed the Memorial’s collection of published histories of all the major units involved in the Owen Stanley and Beachhead campaigns. Pratten found that of the 28 published histories, nine used “Kokoda Track” while 19 used “Kokoda Trail”. This was a majority of over 2:1 in favour of “Trail”. As these histories were usually written, edited, or published by men who had participated in the campaign, Pratten reasonably concluded that “Kokoda Trail” was the nomenclature preferred by the veterans [16]. When the Memorial redeveloped its Second World War galleries during the 1990s, it decided to adopt “Kokoda Trail” because it was favoured by the majority of veterans and because it appears on the battle honours of those units which served in the campaign [17]. The strongest case for the use of “trail” came in October 1972 when the Papua and New Guinea Place Names Committee of the PNG government’s Department of Lands gazetted its intention to formalise the route from Owers’ Corner to Kokoda as the “Kokoda Trail” [18]. This cause a vigorous debate over its name, but ultimately the PNG government formally decided to name the route “Kokoda Trail”. Too much time and energy has been spent on the “track” versus “trail” debate. It is clear that both words were used interchangeably during the war, and in a sense both are correct, so it is not possible to give a definitive ruling for one over the other. Rather than quibble over the name, it is far more important to remember the service and sacrifice of those Australians, Papuans, and Japanese who fought and died along it.