The mail must get through!

The Australian Army’s Base Post Office at the port town of Kantara routinely handled hundreds of sacks of personal and official mail. Stationed north-east of Cairo, the unit spread across both banks of the Suez Canal. It provided mail services between Egypt and the eastern Sinai and Palestine campaign areas, including Jericho and Jerusalem, and places further away, including the United Kingdom and New Zealand. The Memorial holds a collection of private letters written and sent during the First World that would have passed through Base Post Office units, including the one at Kantara, before reaching loved ones at home in Australia.

Base Post Office units were set up by the Australian Imperial Force (AIF) during the First World War to provide essential mail services. 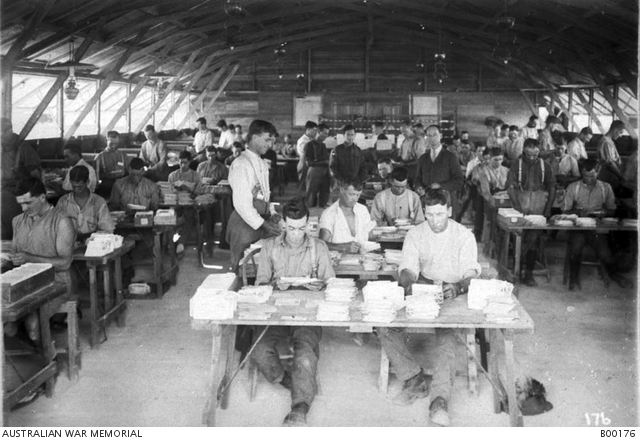 Interior view of the Australian Base Post Office, 1918, showing the staff dealing with 314,000 letters. Photographer unknown.

Although many AIF and British Army units trained and fought together, each country had its own military mail system. The different systems and substantial mail-service problems created potential for friction between the allies. In his reports to AIF Headquarters in London, the Egyptian Expeditionary Force Base Post Office’s Commanding Officer, Major James Pinkerton Campbell, made notes regarding staffing issues, availability (and lack) of vehicles to transport mail, and recommended command structures he thought would prove helpful. His reports had mixed success. While the postal units’ work was recognised as essential, it was not always given priority.

Terrain, weather and various transport routes in Egypt and the Middle East were often rugged and basic. There weren’t the same options available for delivering or tracking mail to or from Kantara as there were in England or Australia. Desert areas surrounded towns and ports; many areas east of Cairo had no pre-made vehicle roads and one railway, if any; sometimes a single wire served as a telephone line. The daily heat was intense. Reliable supplies of drinkable water were often hard to find and store. In many places east of Cairo, all necessary facilities and buildings had to be constructed. These conditions were the cause of ongoing problems for Base Post Office staff. 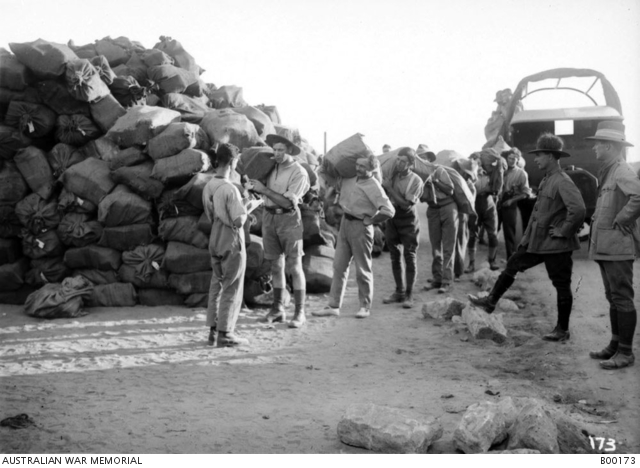 Soldiers unloading sacks of mail which are being checked at the Base Post Office by the Suez Canal, 1918. Photo: James Pinkerton Campbell

During May and July 1918, combat units east of Egypt were concluding operations while others, such as the Imperial Camel Corps, were being disbanded. Masses of troops needed to be moved for demobilisation without yet being able to go home. Hundreds of sacks of mail addressed to these troops had to be quickly re-sorted and re-directed. To help that work, Base Post Office staff used Nominal Roll information compiled at the start of the war, and a card index they had developed at Kantara. The unit’s commanding officer was impressed, and enthusiastically commended the index to high-level AIF staff in London as an example of ingenuity and tireless teamwork in difficult campaign conditions. 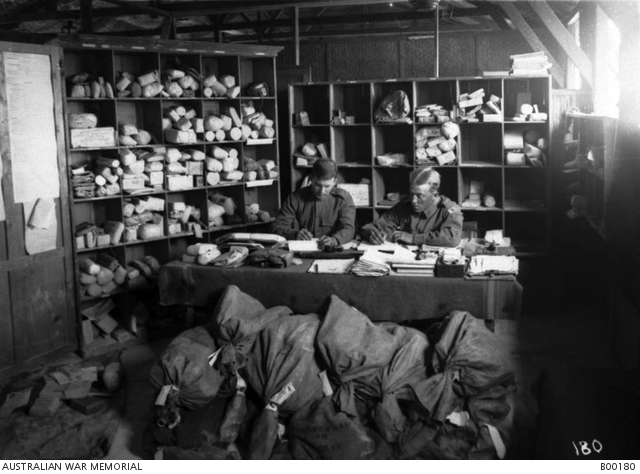 Two unidentified staff working at a table in the registration room at the Base Post Office at camp on the Suez Canal, 1919. Photo: James Pinkerton Campbell

At the end of war the dedicated staff of the Base Post Office at Kantara celebrated a victorious Christmas Day 1918 sit-down dinner. A photograph of the occasion shows a building’s interior decorated with festive signs and flags, and tables set for the meal. After so many months of plain fare, difficulties in adequate food and safe water supplies, long times far away from their own families, and the recent work of sending Christmas mail, this dinner was a fine treat. 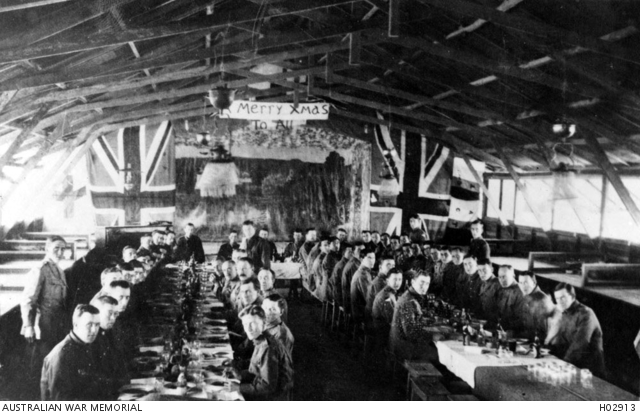 In the post-war decades, Memorial staff collected and catalogued private letters, diaries and other personal papers of those who served in the First World War. Many collection items would have been processed by Base Post Office units, including the one at Kantara, before reaching Australia. War artists and photographers, including Frank Hurley, also depended on the Kantara postal staff to get their work home safely. While serving personnel, veterans and their families wouldn’t have known who had ensured their mail was delivered, there was a vast appreciation of mail received.  For many of these donated items to have survived at all, is thanks in some part to the diligence of armed service postal staff. 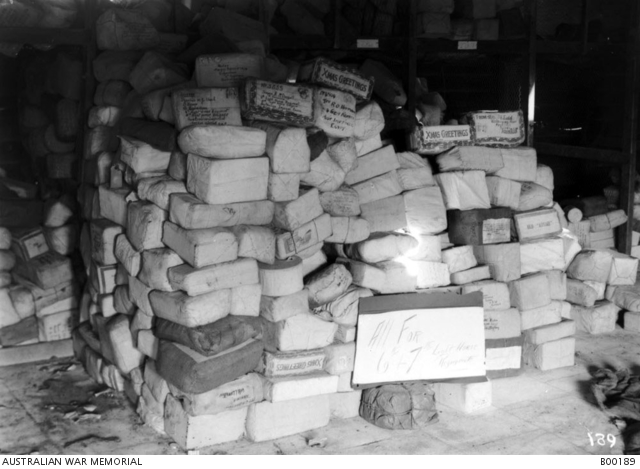 Parcels at the Australian Base Post Office, for distribution amongst the 6th and 7th Australian Light Horse Regiments. Photo: James Pinkerton Campbell; B00178: Staff working an end of the despatch room at the Base Post Office at camp, by the Suez Canal. Sacks on a wooden frame are awaiting bundles of letters. The sign reads “Outward Mails to Australia”. Photo: James Pinkerton Campbell