‘It is unlikely that ‘Australia Day’ will ever be wholly forgotten by any who were privileged to take part in that magnificent outburst of giving. […] It seemed as if the whole community had abandoned itself to giving and spending all it had for the sake of the men on service.’ 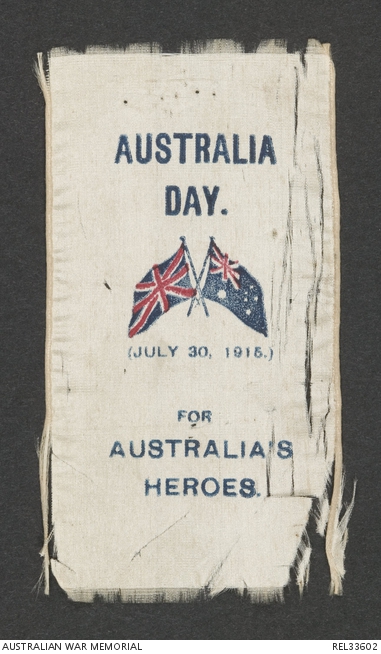 While most of us associate Australia Day with 26 January, in 1915 that date was celebrated as Foundation Day and only in New South Wales, as each of the colonies had their own commemorations for their founding. During the First World War, the concept of a national ‘Australia Day’ was instead part of a wider fundraising plan where money was raised by declaring a special ‘day’ on which events such as auctions, stalls, performances and street collections were held to encourage the community to contribute to the war effort. Belgian Day, for example, held on 14 May 1915, was one of the first of these occasions.

It may have been the enlistment of her four sons that inspired Mrs Ellen Wharton-Kirke of Manly, New South Wales, to suggest an ‘Australia Day’ to the New South Wales Premier, Sir Charles Wade. Her eldest, Captain Errol Wharton-Kirke, having previously served with the Australian Naval & Military Expeditionary Force in New Guinea, enlisted with the AIF on 16 April 1915 and served with 18 Battalion in France. He was killed in action on 4 August 1916. Private Basil Everal Wharton-Kirke, enlisted on 19 February 1915 and was posted to the 2nd Australian General Hospital. Wounded at Gallipoli in October, Basil was invalided home and discharged on 21 February 1916. Lieutenant Hunter Wharton-Kirke enlisted on 13 April 1915 and served with 17 Battalion. He was awarded the Military Cross for his actions on 5 June 1918 and returned to Australia in June 1919. Clement Wharton-Kirke appears to have served with British forces.

Mrs Wharton-Kirke had seen the generosity of the Australian people during other fundraising days and saw an ‘Australia Day’ as a way of drawing on the pride of Australians in their soldiers’ recent achievements at Gallipoli. 30 July 1915 was the date agreed upon, and events were held across all of Australia. Ribbons, badges, handkerchiefs, buttons and other items, like this matchbox, were sold to raise funds, with phrases such as ‘For Australia’s Heroes’, ‘Help Our Wounded Heroes’ and ‘The Turks Struck their Match in the Australians’ which appealed to people’s sense of pride and patriotism. From a population of just under 5 million people, the day raised over 311,500 pounds in Victoria and more than 839,500 pounds in New South Wales. In today’s figures that would be close to $623,000 and $1.7 million respectively.

In recognition of her efforts, the NSW Premier arranged for a gold medalet to be presented to Mrs Wharton-Kirke. It is one of only four commemorative Gallipoli medalets that were struck in solid gold. Thousands of medalets were produced in gilded or silvered bronze to commemorate the landing on 25 April 1915. Mrs Wharton-Kirke’s was specially engraved with ‘Pres to ELLIE WHARTON-KIRKE BY SYDNEY CITIZENS 25.7.1915’. 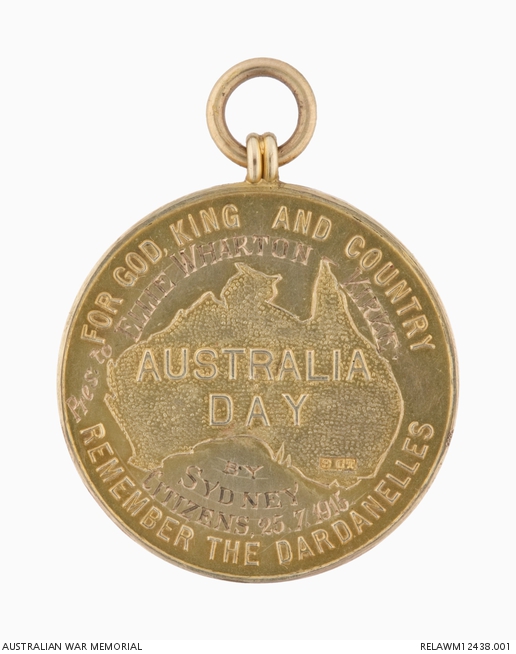 Supporting the troops through patriotic fundraising was also a way that those unable to fight could contribute to the war effort. Edward Davison purchased this handkerchief on the first nominated Australia Day, 30 July 1915. Davison had been unable to enlist at the outbreak of war because, at only five foot two and three quarter inches, he did not meet the minimum height requirement for the AIF. When the minimum height was lowered at the beginning of 1916, Davison enlisted on 11 January. After basic training he was assigned as a private to B Company, 34 Battalion, service number 404, and sailed for service on the Western Front aboard the HMAT A20 Hororata in May 1916. During the Battle of Messines in June 1917, Davison was wounded in the arm and spent six weeks recovering in hospital. He returned to Australian in May 1919. 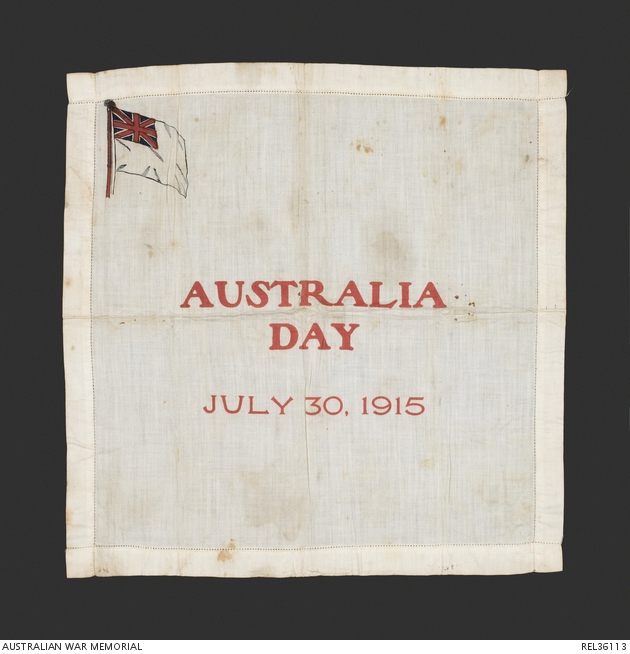 The success of ‘Australia Day’ in 1915 saw a repeat of similar events the following year, this time on 28 July, and in the subsequent years of the war. 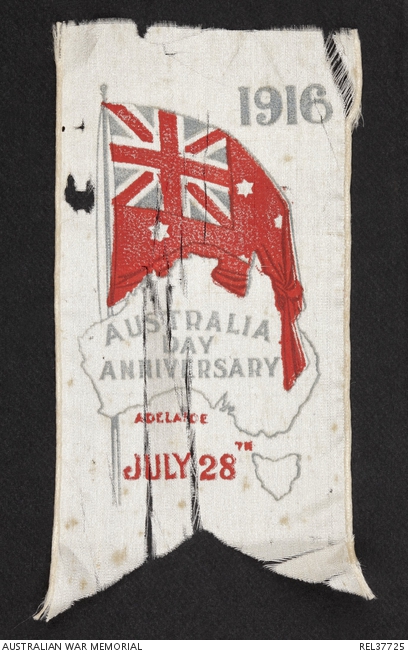 The Memorial holds a variety of material associated with fundraising in Australia during the First World War, including many heraldry items and ephemera, which acknowledge the important role these fundraising days, such as ‘Australia Day’ in July 1915, played in the war effort.