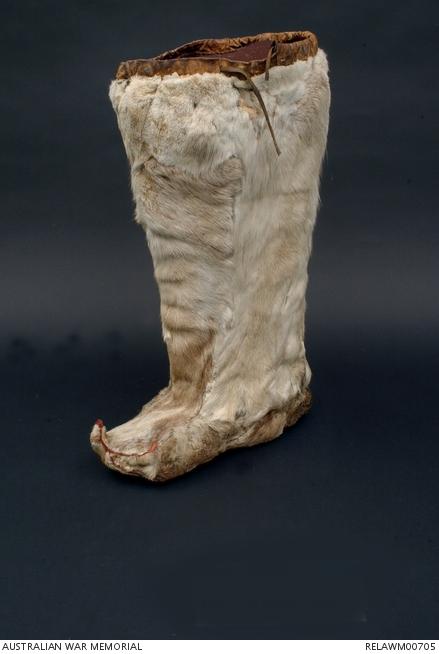 Flier's knee high left overboot, custom-made from narrow sections of pelts, possibly deer, with the fur side being outermost. The pelts have been sewn together vertically with linen thread using the 'top sewing' method. A band of doubled-over leather containing a drawstring leather thong, which is tied at the outside of the wearer's leg, has been sewn around the top of the boot. Red wool trim is sewn around the toe.

Flying over the churned battlefields of the Western Front, the German pilot Baron Manfred von Richthofen quickly established a reputation as a skillful and deadly fighter.

His exploits captured the imagination of the German public, and were feared by Allied pilots. By mid-1917 he had been awarded Germany’s highest gallantry award, and commanded a fighter wing known as “Richthofen’s Circus”, after its practice of painting aircraft in a range of bright colours and patterns. Destroying 80 allied aircraft in air combat, he was dubbed “the Red Baron”, after his own distinctive red Fokker Dr1 triplane.

Fatally shot in combat over France on 21 April 1918, he crashed his aircraft near Australian lines.

This flying overboot was salvaged from von Richthofen’s aircraft by a recovery party from the 3rd Squadron, Australian Flying Corps. The party also recovered von Richthofen’s body, the aircraft’s control column, scraps of fabric and the aircraft compass. It is thought that von Richthofen originally acquired his overboots from a British pilot he had shot down.

The boot is made from narrow sections of deer pelt, sewn together in vertical strips. It is one of a number of items associated with the last flight of the Red Baron in the collection of the Australian War Memorial.

For a longer account of von Richthofen's wartime experiences, see RELAWM00705 in our Collection Database.