This blog post was written by Emily Robertson, a post-graduate student from the Australian National University who undertook an internship in the Memorial's Art section.

During the second battle of Gaza, on 17 April 1917, a group of Australian signallers led by Corporal (later Sergeant) Ernest Lovell-Shore discovered a mosaic that had been partially uncovered by Turkish troops, who had built a trench on a mound in the Wadi Ghuzze near the town of Shellal. As part of the process of establishing a helio station on the site, the Australian troops uncovered an extraordinary example of Byzantine art which is now known as the Shellal Mosaic. Created in AD 561 - 562 under the reign of the Eastern Roman Emperor Justinian, the Mosaic is now held in the art collection of the Australian War Memorial (C157127) and is on permanent display in the Hall of Valour., pp. 42 - 43. 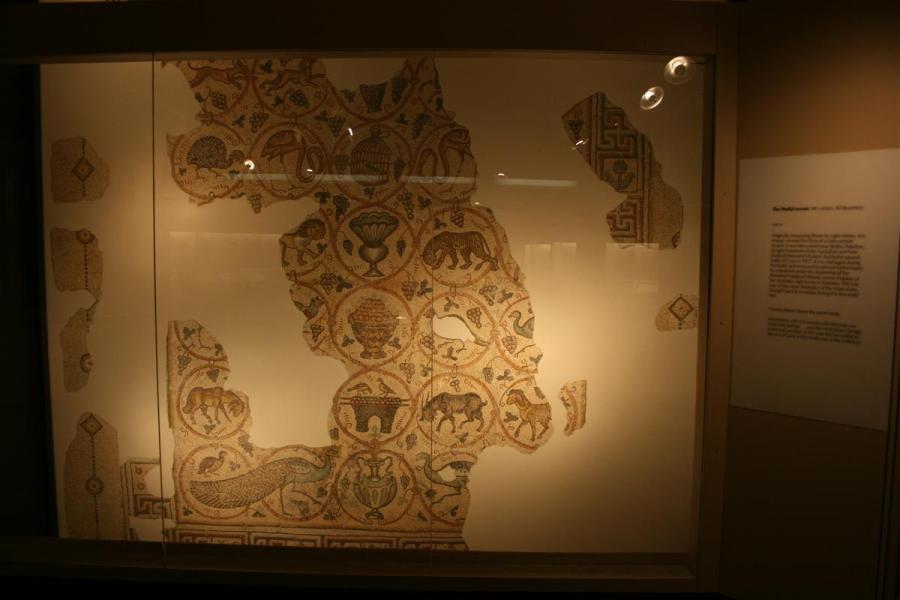 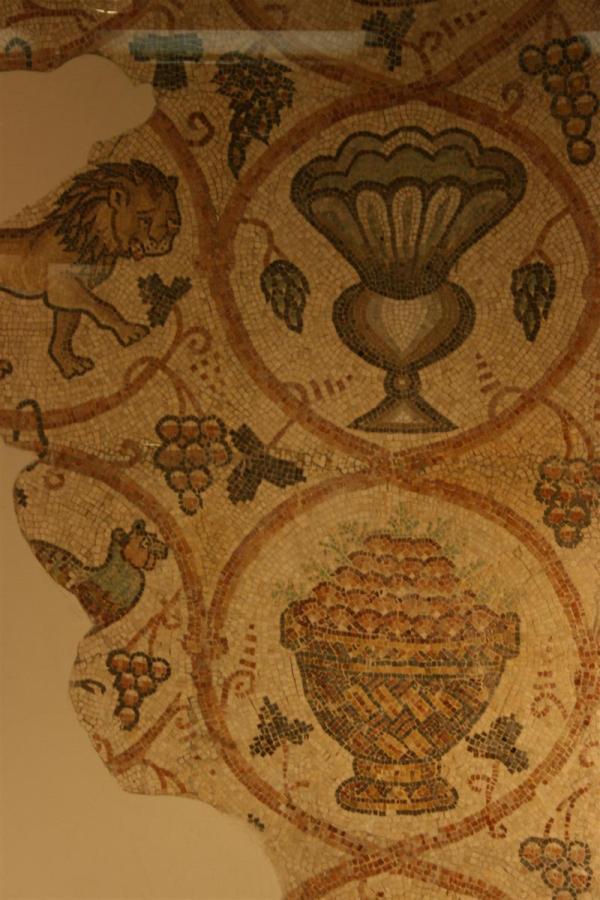 A close up sot of the Shellal Mosaic showing a lion, grapes and a basket. 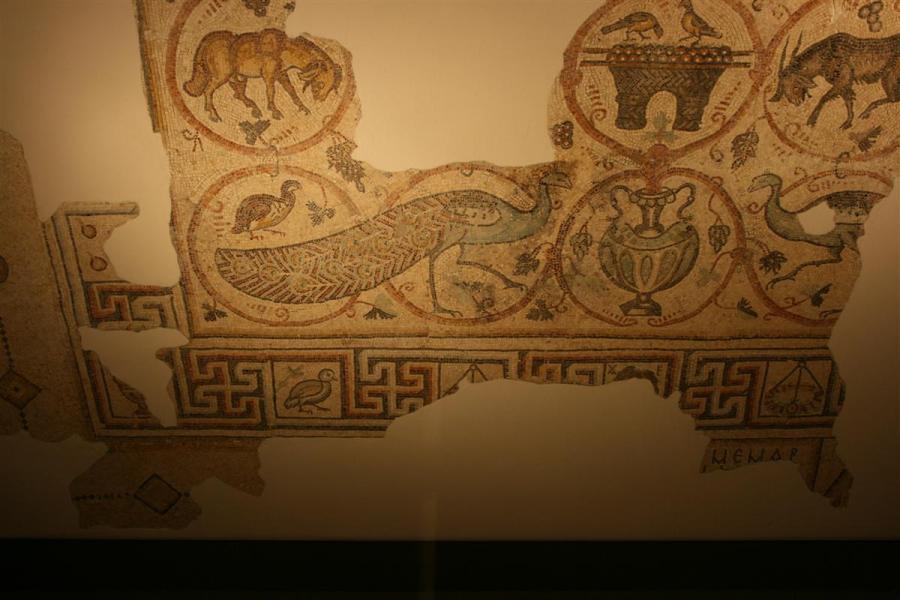 A close up shot of the Shellal Mosaic showing a border edge, peacock, goat and geometric designs.

The Mosaic lay exposed for at least a fortnight before Reverend Maitland Woods of the Church of England, and senior chaplain to the ANZAC Mounted Division, was brought in to excavate it. Woods was a keen amateur archaeologist, and the dig took place over the course of fourteen days - during which time hostilities continued. According to Woods, a German aeroplane crew took a particular interest in the excavation, and repeatedly flew overhead; fortunately the plane eventually left the excavating soldiers alone. Before the Mosaic was dismantled, colour drawings were made so that it could be reconstrcuted accurately. Then it was packed into wooden crates, and sent to Cairo. Unfortunately, a minor diplomatic row ensued between Australia and Britain about the fate of the Mosaic, and it languished in Cairo until June 1918. It took a concerted effort on the part of the Australian military to secure it for Australia. John Treloar, who later became the first Director of the Australian War Memorial, recalled in a statement he wrote for the historical record:

We felt that if the mosaic came to England it would be handed over to some British institution - probably the British Museum - and we might find it difficult to secure the release of this relic (1).

By the end of 1917, when much of the diplomatic wrangling about the Mosaic was taking place, the idea of an Australian War Memorial had already been formed. Renowned Australian historian C.E.W. Bean had conceived of it after the horrific battles on the Western Front in 1916 (2), and by May 1917, John Treloar had already become ensconced in the nascent Memorial - the newly formed Australian War Records Office (3). Australian soldiers had also already developed a sense that their involvement in the First World War would help forge a new national identity, separate from Britain, and were avidly collecting relics independently (4). The Mosaic was to be one of the prize war trophies of the Memorial, and many different members of the Australian military wrote to the War Office arguing the case for Australia to keep it.

The Mosaic captured the imagination of many people, for a number of reasons. Firstly, it was a beautiful antiquity, and certainly not something that people growing up in Australia at the beginning of the 20th century would have seen. The Mosaic represents a crucial period when Hellenic pagan culture began to meld with Christian symbolism (5). Exotic beasts, such as the flamingos and lions which inhabit the Mosaic, would have entranced the soldiers. Another reason it fascinated people was because it was discovered in the Holy Land, and Reverend Maitland Woods mistakenly identified the human remains found with the Mosaic as being those of St George, the Patron Saint of England. When they were exhibited at the Melbourne Exhibition building in 1919, The Age reported that the bones of St George were on display. The reality is somewhat banal in comparison, with the identity of the skeleton still unknown, although historian and archaeologist A.D. Trendall claimed the remains were of a priest called George (6).

The antiquity continued to involve members of the 5th Light Horse Regiment many years after it had been found. In 1941, Sir Donald Charles Cameron, former commanding officer of the 5th Light Horse Regiment, attempted to restore to the Memorial a small part of the Mosaic that had been passed on to St. John's Cathedral in Brisbane. Unfortunately, his friend Bishop Dixon responded that the fragment of Mosaic could not be returned because it has been "embedded in the construction of the sanctuary pavement of the Cathedral."