Records reveal little about the life of Private Thomas Joseph Rogers before he volunteered for service in China. Born in 1881 at Carngham in Victoria, he was the youngest son of Thomas and Ellen Rogers, provision merchants from Yarraville. 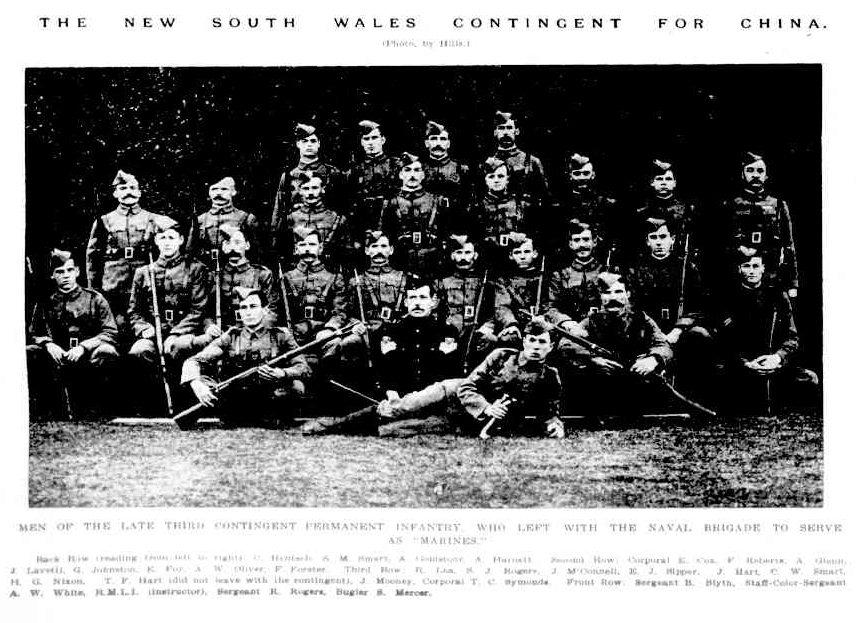 The New South Wales and Victorian naval contingents embarked from Sydney on the SS Salamis on 8 August 1900. During the voyage Rogers contracted rheumatic fever. In port at Hong Kong a board of doctors deemed he had sufficiently recovered and was fit to sail. Three weeks after landing in China, private accounts and newspaper reports by members of the contingent offer fragments into his final days. With the contingent camped just outside Tianjin, Private George Henry Johnston recorded that Rogers was delirious on 2 October and two days later noted he was in hospital at Gordon Hall. In turn a correspondent with the contingent reported that he was “lying unconscious in Gordon hospital” on 5 October. Rogers died on the morning of 6 October 1900, aged 19.

Several private accounts refer to Rogers’ death. On 6 October Johnston wrote, “Poor Tom Rogers died at 5 o’clock am. Military funeral. Marines firing party. Bluejackets escort.” On the same day, Arthur James Livingstone noted “Got out of bed at 1/4 to eight had a look in at the fire station and work shop, where they were making a coffin for a NSW Marine who died, he was bad ever since leaving Sydney”. A correspondent with the contingent later reported, “He was a splendid young fellow physically, and everyone expected him to pull through, but it was not to be. Sunstroke and exhaustion seized him first, then influenza, followed whilst still weak.”

Rogers was buried on the same day as his death, as was commonly practiced during the campaign. His funeral took place at 4 pm “in the churchyard of an old-fashioned ivy-covered church that one might imagine transplanted from an English village”. One correspondent noted that Rogers’ coffin was wrapped in a Union Jack meant to fly over a Boxer stronghold, and described the conclusion of the service as follows:

ere it was lowered into the grave the Anglican curate recited the beautiful words of the burial service. The firing party of bluejackets pealed out the final volleys, and the marines lingered for a moment by the last resting place of their comrade. Then they fell in and marched back to camp.

After Rogers’ death, a subscription list was raised to erect a memorial stone for “the first Australian to die on service in China”. Over 50 members of the New South Wales Naval Contingent contributed to the cause, and by 5 February 1901 the sum of 55 dollars had been raised. It is not known if the memorial was erected. The English church where Rogers was buried was destroyed during an earthquake in 1977 and the site was later built over.

Thomas Joseph Rogers was one of six Australians who died during the campaign in China from illness or misadventure.