'I did get very frightened that night' 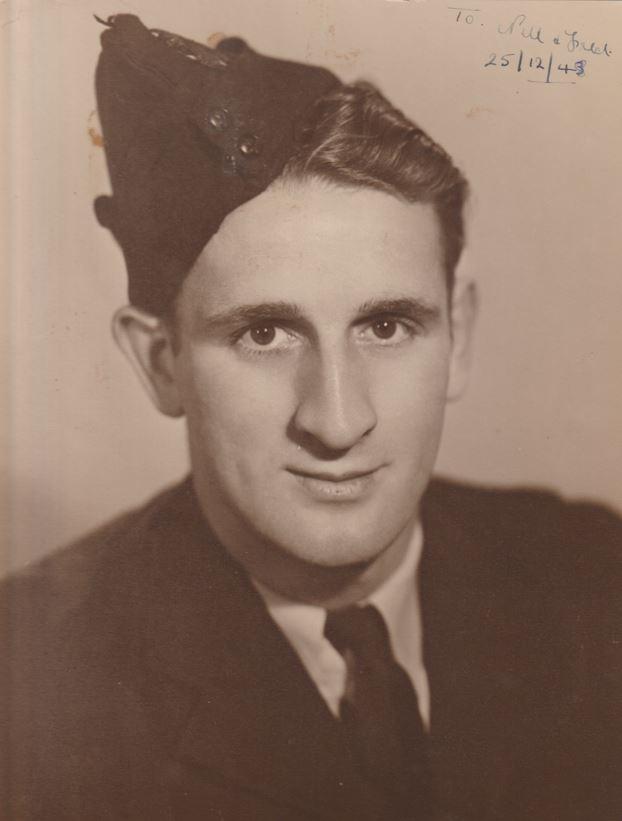 Trevor Scott was guarding aeroplanes at Torokina on Bougainville Island during the Second World War, when he heard a noise in the middle of the night.

“I was standing underneath this plane, and I was sure a bullet went between my head and the wing of the plane,” he said.

“I used to sleep all day and be on duty all night, guarding the aeroplanes and making sure that there were no Japanese infiltrators coming along, trying to blow the planes up.

“It was very lonely and I did get very frightened that night.

“You would be out on your own around all these aeroplanes and you had to walk around and stuff like that.

“You were surrounded by jungle and you didn’t know what was going on.” 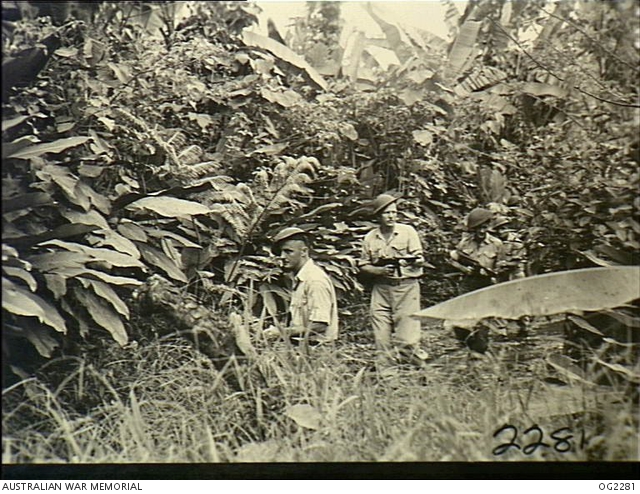 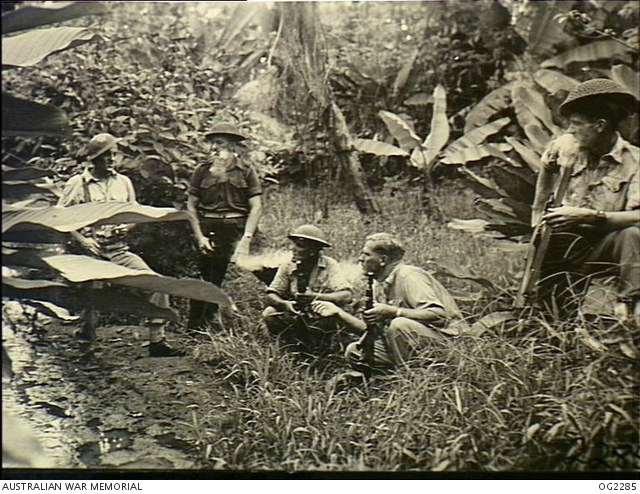 In 1945, Trevor was a 19-year-old leading aircraftsman, serving in Airfield Defence with the Royal Australian Air Force in Bougainville.

One of nine children, he was born in Leongatha in country Victoria on 15 December 1925 and grew up in the town of Mirboo North in South Gippsland, where everybody knew everybody.

“We were brought up in the Depression, so it was pretty rugged,” he said.

“But mostly I remember going to school with no shoes and stuff like that.

“Then one day my mother had a great idea. She said, ‘Oh, here’s a pair of shoes, Trevor, wear them to school.’ 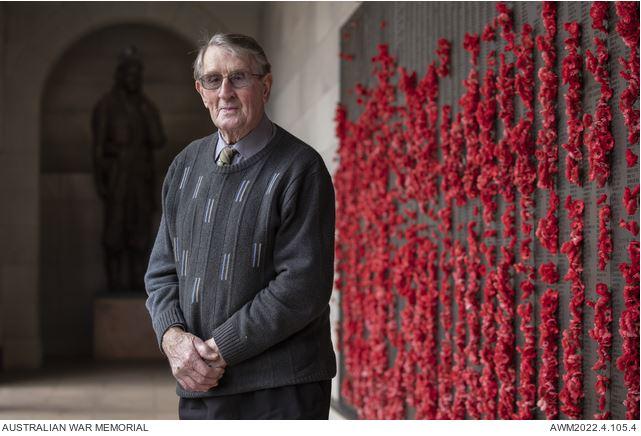 He was about to turn 14 when war was declared in September 1939.

“I remember Bob Menzies and his deep voice announcing that we were at war,” he said.

“We didn’t have power at home. And, in those days, the old battery wireless was the only communication we had.

“My oldest brother, he enlisted, and I was working at the post office at that time. And then his job became available at a general store, so I took that.

“Then my next brother, he enlisted, so that made two, and I thought, ‘Well, I can’t turn 18 quick enough.’

“Everybody my age wanted to go. Everybody. Apart from one or two. And they got the white feather…

“I had no fear of going or of what was going to happen to me. 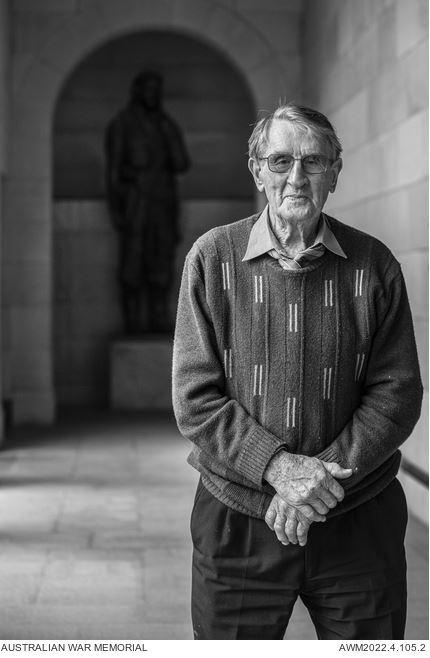 Trevor tried to join the navy, but was deemed unfit because of a shoulder injury he had sustained carrying bags of wheat while working at a grain store.

“But I think Mum was quite pleased when I got knocked back.

“I had three uncles who served in the First World War and my mother’s only brother was killed at Ypres.

“He was declared killed-in-action, and his name’s on the Menin Gate [Memorial to the Missing] which I went to see about three years ago.

“Poor old Mum … I think the war affected my mother more than the three boys being away. 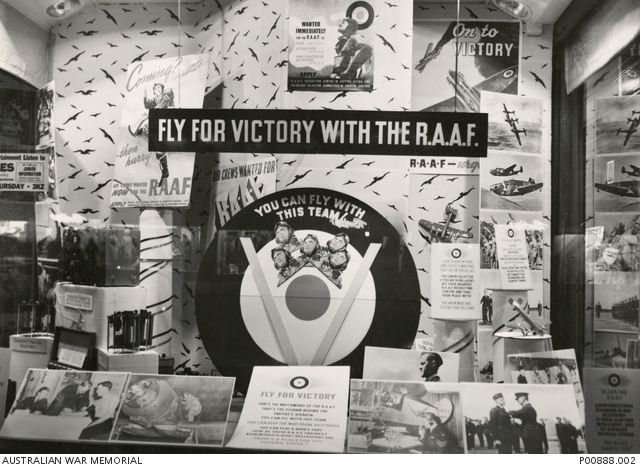 Melbourne, c1941: A display of RAAF recruiting posters, photographs and objects emphasising the need for aircrew during the war.

“When my elder brother enlisted, I used to take telegrams home. The postmaster used to say, ‘Here’s a telegram for your mother,’ and he’d look at me, and he’d say, ‘It’s alright, take it home …

“The last one I received, the postmaster … Mr Anderson … brought it in, and he said, ‘Here’s a good one for your mother.’

“And then she started crying.

“And she said, ‘Nothing. Vernie’s coming home!’

“The oldest one, Vernon … he was a Rat of Tobruk, and he was only home for a few months, and then he went up to Borneo.

“The other one, Wallace, he joined the 7th Commandos, and he served in New Guinea.

“It probably was awful for Mum.

“But she probably had no choice because I said, ‘I’m going, and that’s it.’” 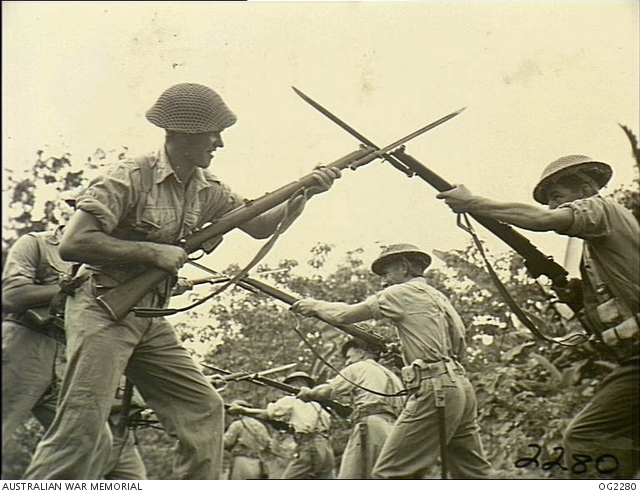 Having been rejected by the navy, Trevor decided to try the air force a few months later.

Having just turned 18, Trevor enlisted in January 1944, and started training to be an aircraft technician.

After staying at the Melbourne Cricket Ground for a couple of nights, he headed to Rocklands Reservoir in Western Victoria for six weeks of recruit training before moving on to South Australia.

“I went to Adelaide to do a trainee course to be an aircraft fitter,” he said.

“But that wasn’t going too well, so my mate and I went to see our boss, and said, ‘What’s the quickest way to get out of this place and get up to the war?’ He said re-muster as a guard – airfield protection – so we did.

“And sure enough, we were up there within four months.” 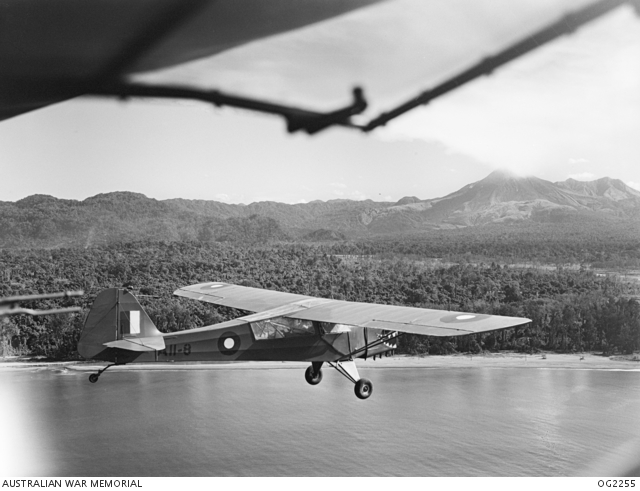 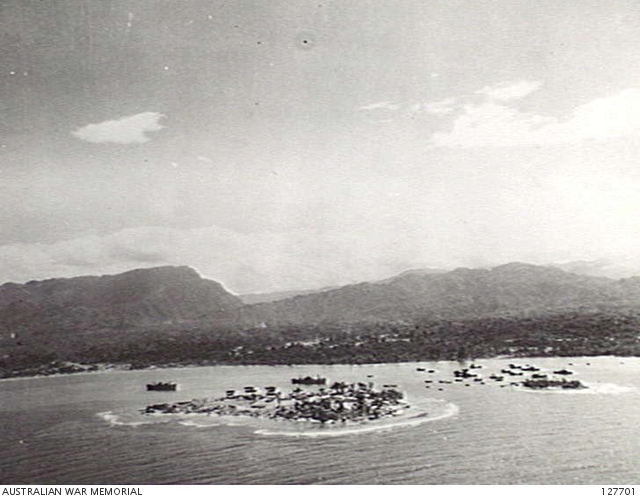 Torokina, Bougainville Island, 1945: Aerial view taken by No. 5 Squadron, RAAF, of the Allied base.

After further training, he flew to Port Moresby on board a Sunderland Flying Boat before continuing on to Torokina in a Beaufort bomber.  It was the first time Trevor had been on a plane.

“I used to help out with the rescue planes [and planes] that might be brought down on different islands. We would go and make sure the Japs didn’t get to the planes, and if they were reparable, we would repair them, and try to get them back home.

“We used to fly over the Japanese line in these open-door Beauforts and heave out leaflets … in Pidgin English and Japanese, telling the Japanese that they were hopeless and that they couldn’t win the war.

“I was still up there when the war finished, and that was it for me.

“It was probably about two days later when I found out that it was really over because the CO said to me, ‘Scott … I’ve got a job for you.’

“There were about 20 Japanese prisoners of war that they’d captured, and he said, ‘Make sure they don’t get away.’

“And then they just glared at me.” 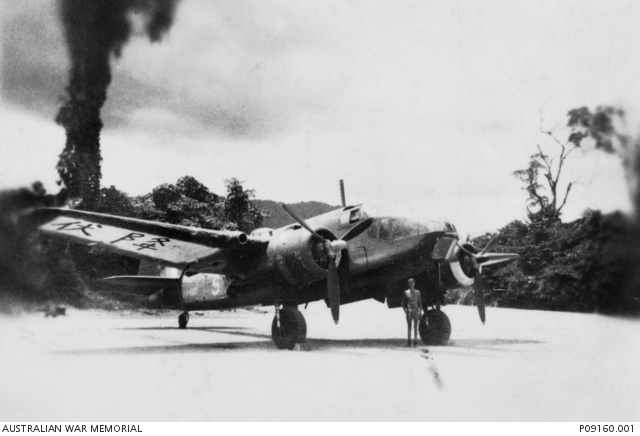 A Beaufort bomber aircraft showing Japanese Kanji characters painted on the underside of the wing. The message was painted from wing tip to wing tip and indicated that Japan had surrendered and the war was over.

Trevor remembers the relief he felt, knowing that the war was over and that he would be home with his family in time for Christmas.

“I was [home] probably four or five months after [my brothers],” he said.

“I remember Mum met me down at the bus stop, and I said, ‘Mum, where’s all the crowd waiting for me to return home?’ And she said, ‘You’re about four months too late.’

“So I went home with Mum and after about two hours I said, ‘Where’s Dad?’

“He was building a fire tower out on Dickies Hill, so at about three o’clock I set off across the paddocks to see my old man …

“And one of my little sisters came up and gave me a big cuddle.”

Trevor was discharged from the air force after the war, and within a fortnight was working in his old job at the general store. He went on to work for a gas and fuel company in Morwell before joining Peter’s Ice Cream, where he worked for 28 years.

He and his late wife, Joan, met in Maffra in 1948, and married in 1949. They went on to have three children, three grandchildren and seven great-grandchildren. 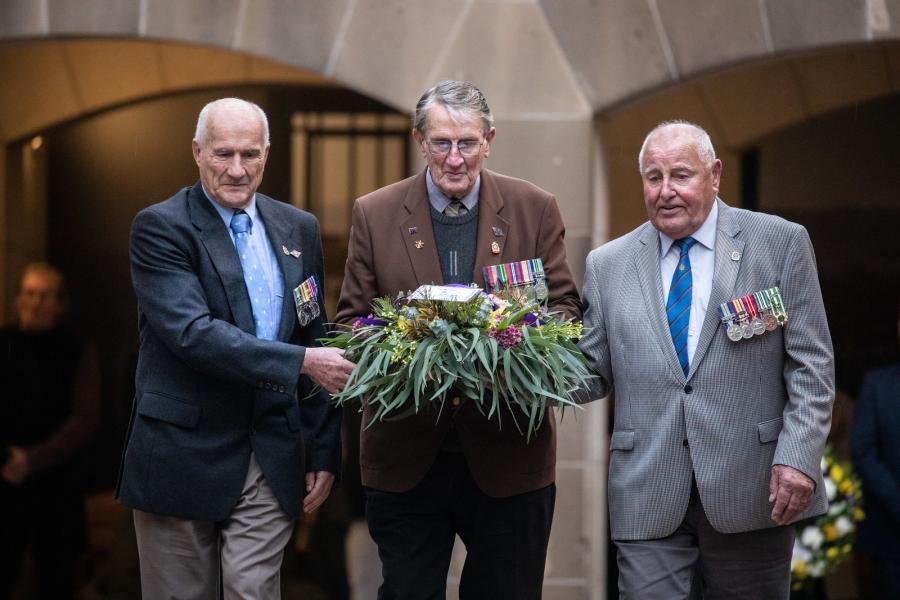 Today, Trevor is a life member of the Inverloch RSL, where he still manages the bar. He recently visited the Australian War Memorial and laid a wreath at a Last Post Ceremony in memory of his brothers and all those who have served.

For Trevor, it’s important to remember the war and the impact it had.

“I’m forever grateful for being part of it.

“But really, I don’t say I played a great part in winning the war, but at least I did enlist, and I did get away.

“The end of the war, that was beautiful.

“There was [a sense of] relief and probably a bit of sadness as well because all the mates you’d made just disappeared.

“My unit was made up of people from all over Australia and I never saw them again.

“It was a wonderful experience, but a very costly one for so many people.”