A gift from Her Royal Highness

As the world prepared to celebrate the first Noel since the outbreak of war, there was a mass outpouring of sympathy and charity for the men fighting at the front.  The Royal family was no different.

To help spread a little festive cheer during the dark days of war, ‘every sailor afloat and every soldier at the front’ was given a special gift tin for Christmas. 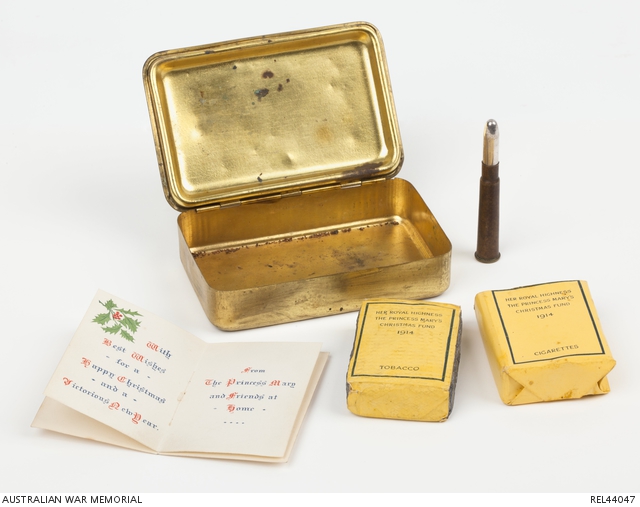 The box contains a cardboard New Year's greeting card from Princess Mary, a small pencil in the form of a silver headed bullet and one packet of cigarettes (open but complete) and one packet of tobacco which is unopened.

The idea was the initiative of Princess Mary, the 17-year-old daughter of King George V and Queen Mary.

Moved by her visits to hospitals for injured soldiers, the young princess wanted to show her support. Her two brothers – David, later King Edward VIII, and Bertie, later King George VI – also began active service and she felt the dangers of war as keenly as many other women did.

It was Princess Mary’s wish that those serving on Christmas Day 1914 would receive a Christmas gift to boost morale and foster a sense of unity. 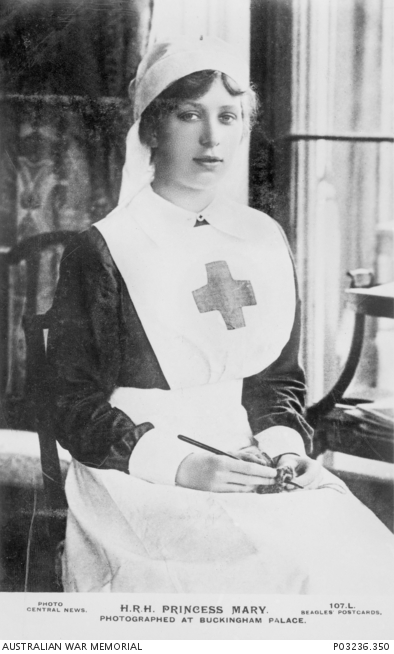 She intended to pay for the gifts out of her own personal allowance, but when this was deemed impractical, it was proposed that she lend her name to a public fund to raise the necessary money. She appealed for help in a letter released by Buckingham Palace on 15 October 1914.

“I want you now to help me to send a Christmas present from the whole of the nation to every sailor afloat and every soldier at the front,” she wrote.

“I am sure that we should all be happier to feel that we had helped to send our little token of love and sympathy on Christmas morning, something that would be useful and of permanent value, and the making of which may be the means of providing employment in trades adversely affected by the war.

“Could there be anything more likely to hearten them in their struggle than a present received straight from home on Christmas Day? Please will you help me?” 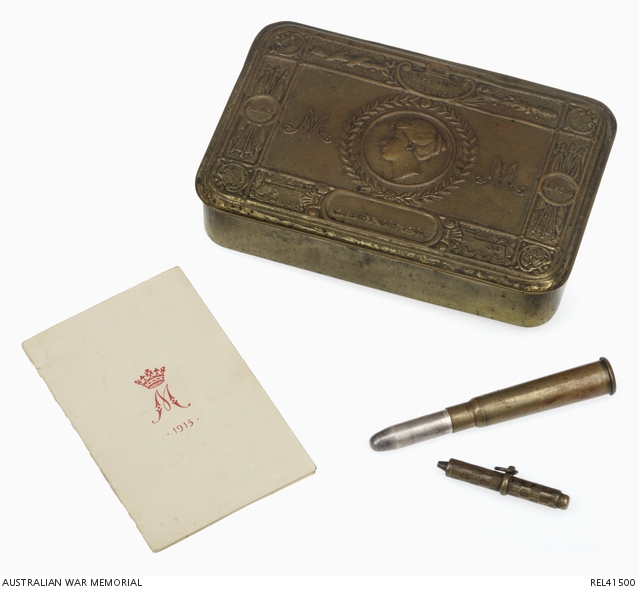 “Princess Mary was sending these gift tins as a token of appreciation at a time when people believed that the war would be over by Christmas,” Dr Neale said.

“They were initially intended for distribution to all British, Colonial, and Indian soldiers and sailors who were ‘wearing the king’s uniform’ overseas or at sea on Christmas Day 1914. But distribution was widened to include all those who were serving at home or abroad, as well as prisoners of war, and the next of kin of casualties.

“It was an acknowledgement that these men were far from home, away from family, fighting for King and Country, at a time when they had all hoped that the war would be over. Obviously, though, it was just the beginning.” 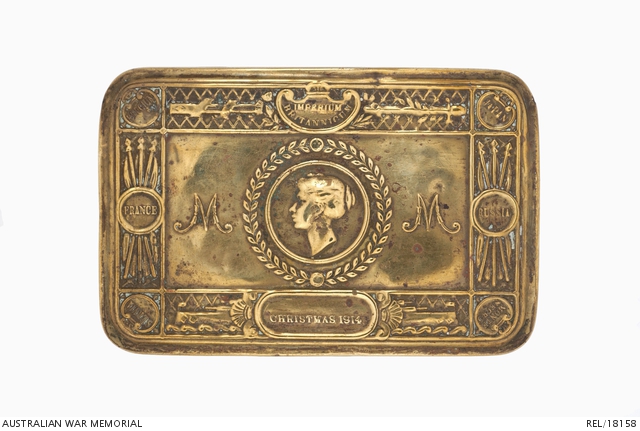 The rectangular tin has a hinged lid and is embossed on top with a profile of the Princess surrounded by a wreath.

Designed by Messrs Adshead and Ramsay, the rectangular brass tins featured an image of Princess Mary, surrounded by a wreath, with the letter ‘M’ embossed on either side.

The tins contained various gifts, such as tobacco, confectionary, spices, pencils, a notebook, postcards, and a picture of the princess. But the large number of tins that were needed, made it impossible to manufacture, supply and distribute all of the gifts by December 25.

Recipients were divided into three classes. Class A comprised the Navy, including minesweepers and dockyard officials, and troops at the Front in France; the wounded in hospitals and men on furlough, prisoners and men interned (for whom the gift was kept in resereve), members of the French Mission with the Expeditionary Force, nurses at the front in France, and the widows or parents of those who had been killed. Class B included all British, Colonial and Indian troops serving outside the British Isles, who had not been provided for in Class A.  And Class C was all troops in the British Isles.

Class A received their gifts on or near Christmas Day 1914, but Class B and C gifts were not sent out until January 1915. They contained a Happy New Year card instead of a Christmas card. 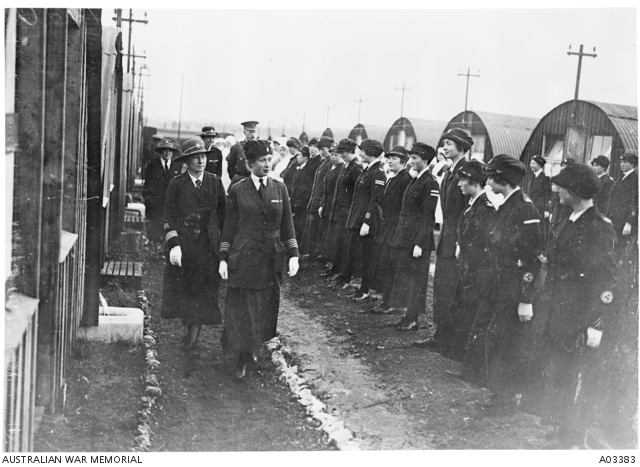 The gift tins became a treasured possession for many during the war, even after the original contents had been used.

The air-tight brass tins made a useful container for money, tobacco, papers and photographs during the war, and were often carried throughout subsequent service. Some men even carefully repacked their gifts and sent them home to their wives and families.

The contents of the gift tins also varied depending on whether the recipient was a smoker or non-smoker and whether the contents were deemed appropriate. Nurses, for example, were offered chocolate instead of tobacco, and Sikhs were offered sugar candy and spices. 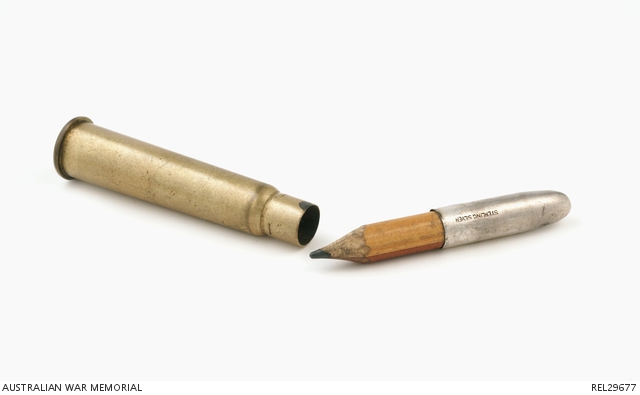 Brass .303 cartridge case inscribed with Princess Mary's monogram. In the top of the case sits a small graphite pencil with a sterling silver 'bullet' base.

Over the next four years, another two million gift tins would be delivered to people involved in the war effort. But the production and distribution of so many gift tins was a huge task. Industries were under strain during the war, and metal was being pumped into the armaments industry to make weapons and munitions.

Sheets of brass had to be specially ordered in from the United States, and in May 1915, a large quantity of brass to be used in the gift tins was lost at sea when RMS Lusitania was hit by a German torpedo and sunk off the Irish coast on its way to England, killing all 1,195 passengers on board.

Difficulties in manufacturing and distribution meant gift tins were still being distributed long after the Armistice was signed in November 1918. 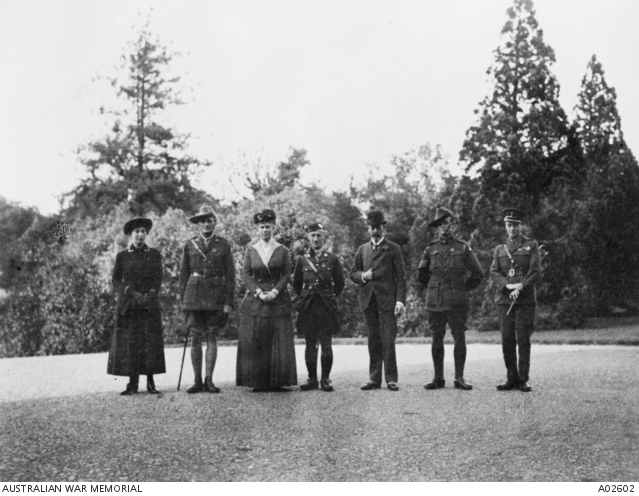 Despite this, the gift tins were a major success. Princess Mary received many letters of thanks from troops expressing their gratitude. One private even wrote to tell her that her gift tin had saved his life. He had been shot in the chest, but the bullet had been deflected by the gift tin which he had been carrying in his pocket. 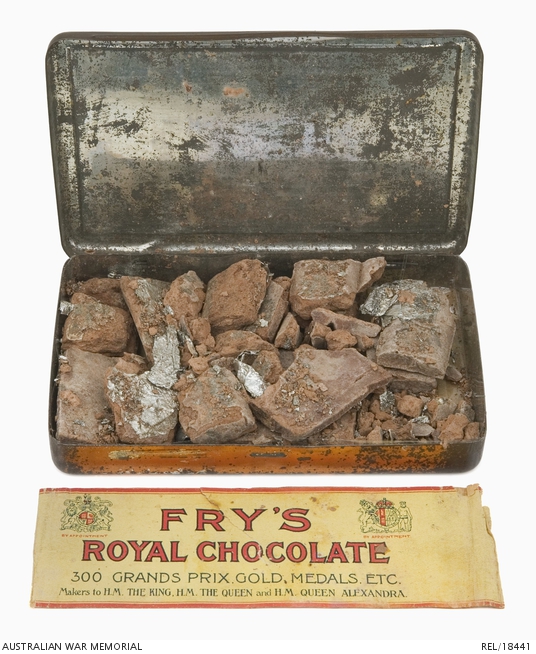 Today, the Memorial has a number of different examples of the gift tins in the National Collection.

“Because they were made of brass, they survived quite well,” Dr Neale said.

“We even have remnants of the original chocolates in a few of the tins. They were seen as a gift from the King and Country that you were fighting for – a reminder that the Royal family and the people at home were thinking of these men out there at the front.

“This practice of sending Christmas gifts to deployed troops is a tradition that continues through to today.”