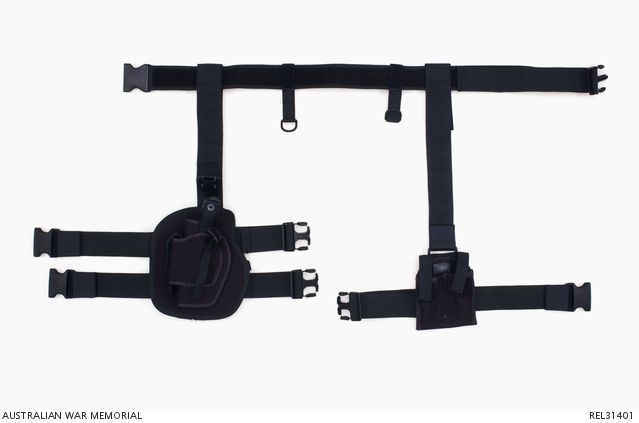 Black nylon webbing belt with fastex clip buckle. The belt is adjusted by a Velcro tab which loops through one end of the buckle. The outside of the belt is faced with Velcro for its entire length, ensuring that the loop can be securely located at the size required. Suspended from the left hip by a length of 52 mm nylon webbing is a pistol holster with twin elastic straps enabling it to be securely fastened to the thigh. On the right hip, a matching strap holds a pair of pockets with Velcro tabs to secure clips of pistol ammunition. The pockets have a single elastic strap for fitment on the right thigh. A label sewn to the rear of the holster gives manufacturer's details. At the rear of the belt are a pair of suspension loops, each comprising a short length of 25 mm nylon webbing ending in a black plastic 'D' ring. These loops are also retained in position by Velcro on their inside surfaces.

Black nylon webbing pistol holster belt of the type worn by Royal Australian Navy Clearance Diving Team 3 in Iraq. In service, these items would have been hand painted in yellow, pink, grey and brown to match the Mk III (Iraq pattern) DPDU camouflage. AUSCDT THREE was deployed in support of Operation Falconer in February 2003. In early March, they took up residence at the Kuwait Naval Base on the coast not far from Kuwait city, where they engaged in equipment preparation and training, and on the morning of 24 March, they crossed the border into Iraq. Headquarters and accommodation were established at the old port of Umm Qasr where AUSCDT THREE divers quickly located a sunken minelayer with four live mines onboard. The team also participated in the clearing of ordinance from within the town itself. Umm Qasr was declared open on 9 April, and AUSCDT THREE immediately moved twenty kilometres further north, to the port of Khawr Az Zubayr. This port was also cleared in conjunction with other coalition dive teams, and explosive ordnance disposal patrols on the Al Faw peninsula were undertaken.