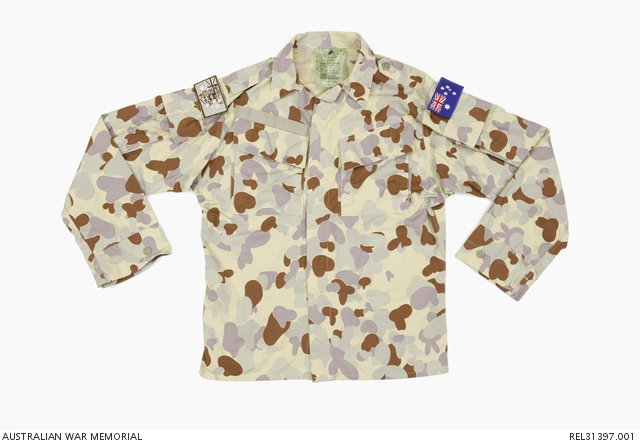 Long sleeved Australian Army shirt in 2003 type Disruptive Pattern Desert Uniform (DPDU) fabric as used in Iraq. The sleeves are reinforced between elbow and wrist with a second layer of fabric, and are adjustable at the cuff by a fabric tab and three buttons. All buttons are of khaki plastic. The shirt has a five button closure, all but the topmost button being concealed. There are four expanding pockets (one on each breast and one on each upper arm) closed by pairs of buttons concealed under flaps. The breast pockets are angled downwards from the shoulder. Above the right hand breast pocket is a Velcro strip for a name tape (which is not present). The shoulder straps are each secured by a single button near the collar. A piece of Velcro attached above the pocket on the left sleeve holds a cloth patch featuring an Australian flag embroidered in blue, white and red cotton. Attached with Velcro above the right sleeve pocket is a machine embroidered patch in khaki, brown and white, featuring the badge of the RAN Clearance Divers, superimposed on an Australian flag. Inside the collar is a large green fabric label giving manufacturer's and care details.

Issued to a member of Royal Australian Navy Clearance Diving Team Three. AUSCDT THREE was deployed in support of Operation Falconer in February 2003. In early March, they took up residence at the Kuwait Naval Base on the coast not far from Kuwait city, where they engaged in equipment preparation and training, and on the morning of 24 March, they crossed the border into Iraq. Headquarters and accommodation were established at the old port of Umm Qasr where AUSCDT THREE divers quickly located a sunken minelayer with four live mines onboard. The team also participated in the clearing of ordinance from within the town itself. Umm Qasr was declared open on 9 April, and AUSCDT THREE immediately moved twenty kilometres further north, to the port of Khawr Az Zubayr. This port was also cleared in conjunction with other coalition dive teams, and explosive ordnance disposal patrols on the Al Faw peninsula were undertaken.