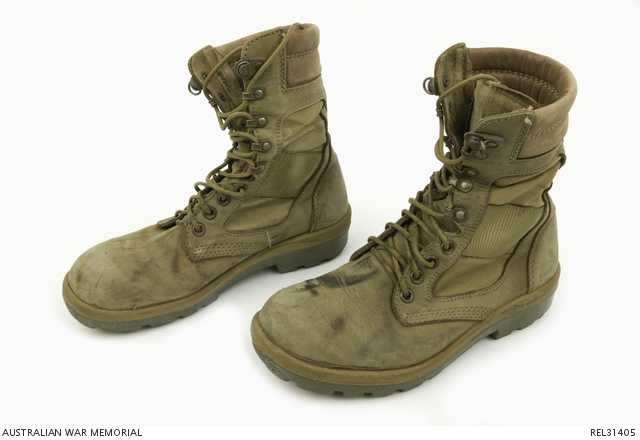 Pair of light brown suede Australian military issue 'Terra' boots without toecaps. Each boot has four pairs of brass eyelets and five pairs of riveted loops to retain the green nylon laces. The top loop has a brass D ring with a plastic lock down stud which retains the lace in position even when untied. There are a pair of mesh covered ventilation holes located at each instep. The boot uppers from the heel to the ankle are of pale brown woven nylon, with a reinforcing strip of nylon webbing stitched across them. The upper ankle support section is made of padded brown suede leather. The soles are of dark green rubber, over an inner layer of lighter olive green rubber. The suede tongues are lined with green fabric, and each has a built-in Velcro pocket. The name 'CHRIS SMART' is written in black felt pen inside each tongue. The removable insoles are made of rubber with an upper surface of leather.

Issued to Chris Smart, a member of Royal Australian Navy Clearance Diving Team Three. AUSCDT THREE was deployed in support of Operation Falconer in February 2003. In early March, they took up residence at the Kuwait Naval Base on the coast not far from Kuwait city, where they engaged in equipment preparation and training, and on the morning of 24 March, they crossed the border into Iraq. Headquarters and accommodation were established at the old port of Umm Qasr where AUSCDT THREE divers quickly located a sunken minelayer with four live mines onboard. The team also participated in the clearing of ordinance from within the town itself. Umm Qasr was declared open on 9 April, and AUSCDT THREE immediately moved twenty kilometres further north, to the port of Khawr Az Zubayr. This port was also cleared in conjunction with other coalition dive teams, and explosive ordnance disposal patrols on the Al Faw peninsula were undertaken.