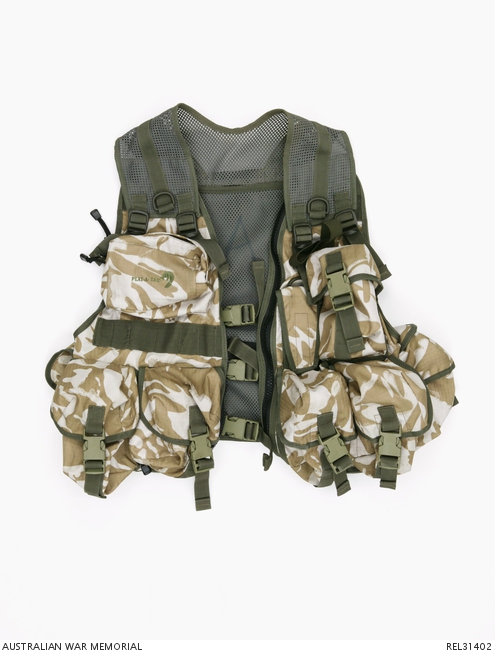 Australian manufactured British Army issue webbing vest in a brown and khaki 'desert cam' fabric. The sleeveless vest is made of olive green nylon mesh, fastened at the front by three 'Fastex' clips. The vest is reinforced by strips of nylon webbing across the back and shoulders, and has a number of adjustable carrying straps. On each side of the chest are camouflaged panels in nylon rip-stop fabric. Each panel has four large pouches with overlapping flaps secured by Velcro and 'Fastex' clips, as well as a number of smaller pockets. The lower surfaces of the pouches have drain holes reinforced with metal eyelets. The chest panels have zip closures along their inside edges, allowing access to internal pockets, that on the left hand side having a built-in pistol holster. A machine embroidered manufacturer's marking of a platypus and the word 'PLAT-A-TAC' appears on the uppermost right hand pouch. The vest is adjustable for size via a series of Velcro panels and straps.

British Army pattern trooper's webbing vest issued to Lieutenant Commander Scott Craig, Commanding Officer of Royal Australian Navy Clearance Diving Team Three. AUSCDT THREE was deployed in support of Operation Falconer in February 2003. In early March, they took up residence at the Kuwait Naval Base on the coast not far from Kuwait city, where they engaged in equipment preparation and training, and on the morning of 24 March, they crossed the border into Iraq. Headquarters and accommodation were established at the old port of Umm Qasr where AUSCDT THREE divers quickly located a sunken minelayer with four live mines onboard. The team also participated in the clearing of ordinance from within the town itself. Umm Qasr was declared open on 9 April, and AUSCDT THREE immediately moved twenty kilometres further north, to the port of Khawr Az Zubayr. This port was also cleared in conjunction with other coalition dive teams, and explosive ordnance disposal patrols on the Al Faw peninsula were undertaken.