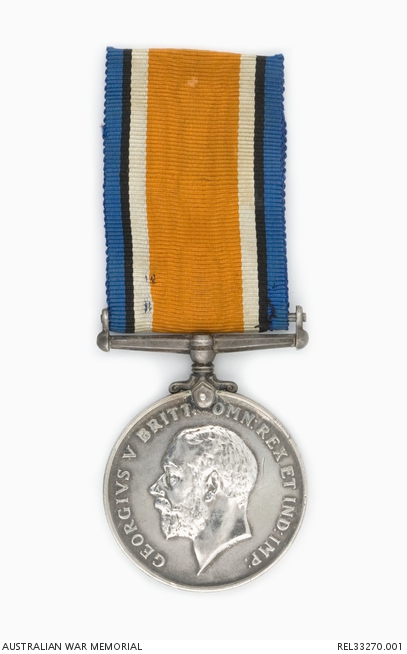 This medal is related to the service of 2278 Private Henry William 'Harry' Winter of Sale, Victoria. He was born in 1889, the son of John George Powell Winter and Margaret Bain and was one of four brothers who served in the First World War.

Winter enlisted in the AIF on 31 March 1916 and embarked from Melbourne with the 4th reinforcements of the 46th Battalion on 16 August 1916 aboard RMS Orontes. He arrived in England in October and proceeded to France in November. Soon after he fell ill with the mumps and was admitted to hospital. He joined his unit in the field in January 1917. He served with his battalion until briefly hospitalised sick in September and for a longer period in October, not rejoining his unit until near the end of November.

In late January 1918 Winter was detached to the 184th Tunnelling Company for about a week before returning to the 46th Battalion. In March he was again admitted to hospital, returning to his unit a few weeks later. Winter was killed in action on 8 July 1918 possibly when the 46th Battalion took part in a minor operation against German positions at the village of Sailly-Laurette on the night of 7/8 July. The operation was designed to straighten the line along the banks of the Somme River and was preceded by a heavy trench mortar barrage. The Germans offered little resistance and the battalion achieved their objectives.

Winter was one of several men of the 46th battalion killed that day. He was initially buried at Vaux-sur-Somme Communal Cemetery Extension, but was moved to the Villers Bretonneux Military Cemetery in the 1920s.

His brother, Lance Corporal George Ernest Winter, who served with the 1st Canterbury Battalion, NZEF, died of wounds in September 1916 and is buried at Etaples Military Cemetery. Another brother, Private Walter Robert Winter, who served with the South African Infantry, died of wounds on 14 April 1917 and is also buried at Etaples. The eldest brother, Private Herbert George Winter, also served with the AIF, in 23rd Battalion. He survived the war and lived on a soldier settlement called 'Delville Wood' near Deniliquin, New South Wales.