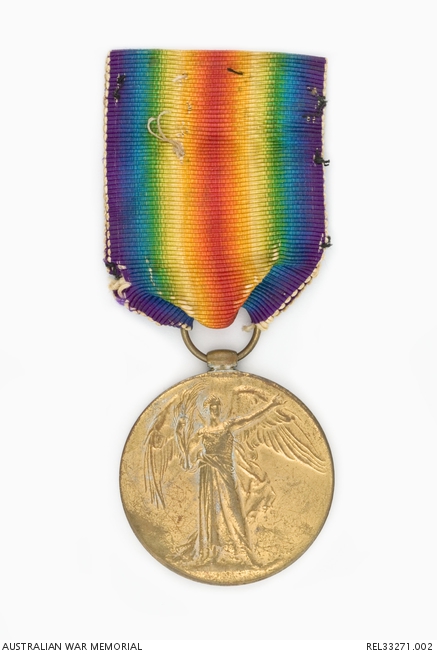 This medal is related to the service of 9799 Private Walter Robert Winter, one of four brothers who served in the First World War. Winter was born at Deniliquin, NSW, in 1877, the son of John George Powell Winter and Margaret Bain. He emigrated to South Africa before the First World War, where he enlisted in the South African Infantry on 19 September 1916. Prior to enlistment he worked as a train driver with the Durban Railway.

Winter embarked from South Africa for England aboard the Balmoral on 7 October 1916. He served on the Western Front from February 1917 with C Company of the 4th Regiment. In April he received a gunshot wound to his right thigh, probably near Arras, causing a compound fracture of his femur. Winter was admitted to a field ambulance on 13 April before being transferred to a hospital at Etaples where he died on 14 April from his wounds. He was buried at Etaples Military Cemetery, south of Boulogne, in France.

His brother, Lance Corporal George Ernest Winter, who served with the 1st Canterbury Battalion, NZEF, died of wounds in September 1916 and is also buried in the same cemetery. Another brother, Private Henry William Winter, served with 46th Battalion, Australian Imperial Force and was killed in action on 8 July 1918 near Amiens. The eldest brother, Private Herbert George Winter, also served with the AIF, in 23rd Battalion. He survived the war and lived on a soldier settlement called 'Delville Wood' near Deniliquin, New South Wales.