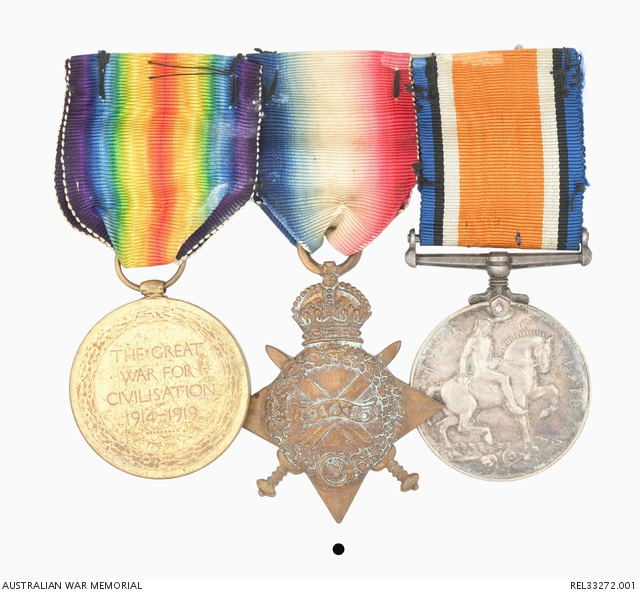 This medal is related to the service of 6/2014 Lance Corporal George Ernest Winter, one of four brothers who served in the First World War. Winter was born at Sale, Victoria on 8 July 1883, the son of John George Winter and Margaret Bain.

By 1911 he had moved to New Zealand and was working as a ploughman at Lowcliffe, south west of Christchurch. Winter was living in Christchurch when he enlisted in the New Zealand Expeditionary Force on 7 January 1915. He embarked for overseas service with C Company of the 4th reinforcements of the 1st Battalion Canterbury Regiment on 17 April 1915, bound for Egypt.

After a brief time in Egypt, the 4th reinforcements were sent to Gallipoli, arriving there on 8 June. Winter served at Gallipoli until October, when he was admitted to a field ambulance on Mudros with jaundice. In November he was evacuated sick to England, arriving there in December 1915.

He rejoined his battalion in Egypt on 1 March 1916 before travelling to France to serve on the Western Front. He served during the Somme offensive and on 24 July was promoted to lance corporal. Winter was wounded on 17 September, suffering a compound fracture to the skull. At the time the 1st Canterbury Battalion were at a feature called 'Box and Cox', near Flers. Their position was shelled through the afternoon and night of 17 September and it is presumed that it was during this time that Winter was wounded.

He was admitted to 2 Field Ambulance on 19 September and then to the 22nd General Hospital at Etaples two days later. Winter died of his wounds on 23 September 1916. He is buried in Etaples Military Cemetery, south of Boulogne in France.