The man with the donkey 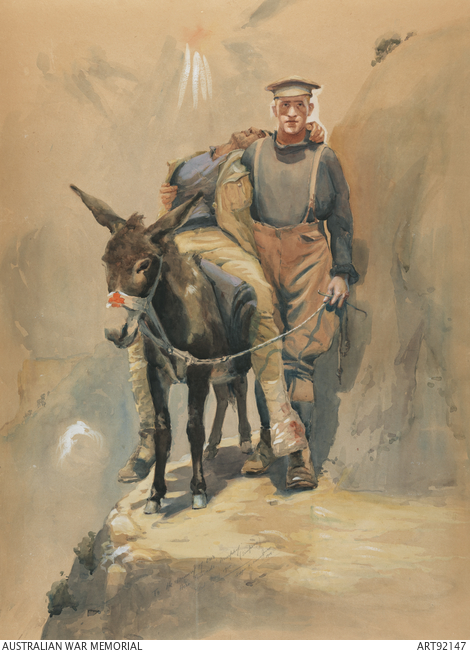 Depicts New Zealander Private Richard (Dick) Alexander Henderson of the New Zealand Medical Corps with a donkey. Moore-Jones believed that the photo he based it on was of Private John Simpson Kirkpatrick of the 3rd Australian Field Ambulance and his donkey, 'Murphy'. However, the painting was actually based on a photograph taken by Sgt. Jas (James) G Jackson of the New Zealand Expeditionary Force of Dick Henderson, not Simpson. Henderson is shown as a full-length figure, moving forwards along a cliff edge, supporting a wounded soldier seated on his donkey. This work was reproduced by the British Historical Section (Military Branch) of the Committee of Imperial Defence, London, in July 1926. It was owned by the Commonwealth Government in London and then came back to Australia during the 1960s, where it became property of the Prime Minister's Department and from there entered the National Gallery of Australia's collections during the 1980s. The painting was presented to the Commonwealth Government through Sir John McEwan.