Medical armband said to have been worn by Simpson's donkey : Colonel A Sutton, 3 Field Ambulance, AIF 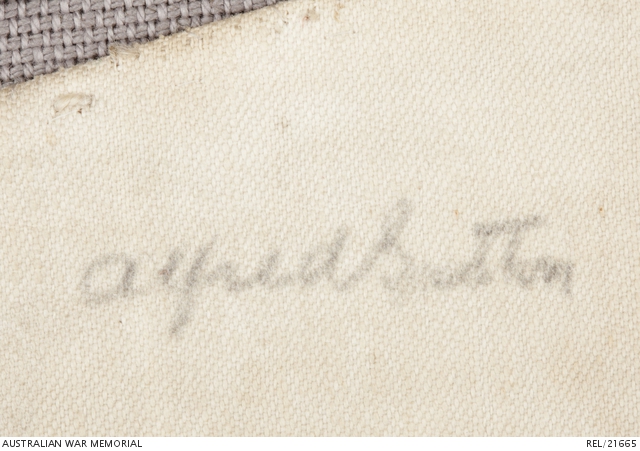 White twill cotton armband with a central red Geneva cross. The band is roughly hemmed on the reverse and tapers to 15 mm wide at each end with its widest part at 75 mm. The signature of 'Alfred Sutton' is written in black ink on the front of the band. On the reverse of the band is an oval blue ink stamp with the words '1st AUSTRALIAN STATIONARY HOSPITAL' around the circumference and the word 'RECEIVED' central, followed by a line (intended for a date). The Red Cross is of wool and is machine stitched. Each end of the band is ingrained with dirt.

A Red Cross armband which originally belonged to Colonel Alfred Sutton, Commanding Officer of 3 Field Ambulance at Gallipoli. It is said to have been placed across the forehead of Simpson's donkey (variously said to have been named 'Duffy', 'Murphy' or 'Abdul') beneath its ears and attached to the cheek pieces of its halter by Colonel Sutton, as a sign that it officially belonged to the unit. The armband was bought home after the First World War by Colonel Harry Nairn Butler, who succeeded Sutton as Commanding Officer of 3 Field Ambulance.