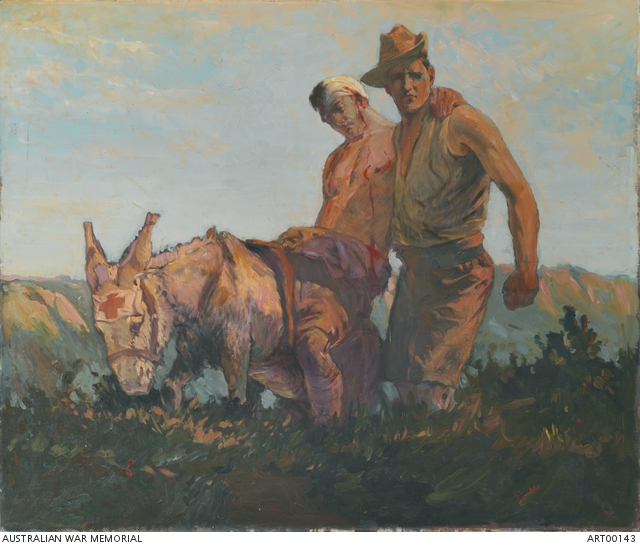 Arguably Australia's most famous soldier, 'Simpson' was neither a general nor a Victoria Cross recipient, but a stretcher bearer who served briefly in the nation's first major campaign. The painting depicts this essential ANZAC story of Simpson assisting a wounded man, who is being carried on a donkey. Pain and fatigue are etched into the face of the wounded soldier. Details such as Simpson's slouch hat reinforce the Australian mythology of this event. Simpson looks towards the viewer from under the brim of his slouch hat. He supports the weight of the injured soldier with his arm and steadfastly guides the party forward. The donkey has a red cross headband (medical officer's brassard) across its head. George Courtney Benson (1886-1960) was a painter and muralist. He studied at the National Gallery School, Melbourne from 1903 and later worked for the 'Bulletin' in Sydney, then as an illustrator and cartoonist for Melbourne 'Punch'. As a result of his drawings at Gallipoli and in France during the First World War, he was appointed official war artist in 1918. He served with the 3rd Field Artillery Brigade and from June 1916 was with the British Expeditionary Forces in France. After the war, he continued to work for the War Records Section and returned to Melbourne in 1919 to complete works for the War Memorial and spent the next decade painting watercolour landscapes and working as a book illustrator. In 1931 he moved to Western Australia to undertake work on murals. Benson enlisted in the Australian Citizens Military Forces from 1940 to 1943, working in camouflage.